Securing a top-four finish last season represented real progress for Liverpool, but the Reds’ inability to sustain a title challenge highlighted the need for more quality to be added to their squad.

Step forward Mohamed Salah, with the lightning-fast Egyptian international winger arriving at Anfield for the princely sum of £34m and looking to show Premier League audiences just what he is capable of.

Little time has passed since the 25-year-old endured a frustrating 13-game spell at Chelsea, but his subsequent switch to Serie A with Fiorentina and then AS Roma has breathed new life into his career.

Over the course of the last couple of campaigns, it would be fair to say that Salah has been tearing it up in the Italian capital, helping his side to secure consecutive top-three finishes: 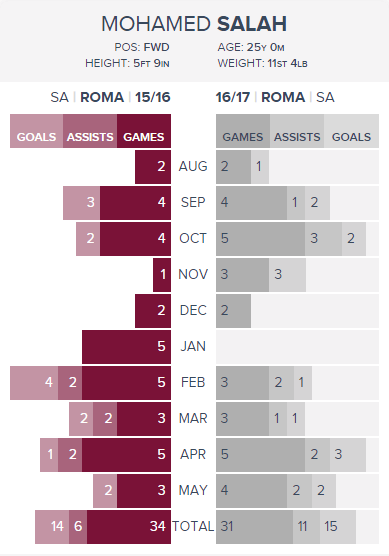 In fact, his return of 29 goals and 17 assists from 65 top-flight appearances is a staggering one, particularly when you consider that he has spent most of his time operating on the right wing.

Adept at cutting inside onto his favoured left foot, the 2016/17 campaign highlighted just what a huge impact the winger can have on the attacking fortunes of his club: 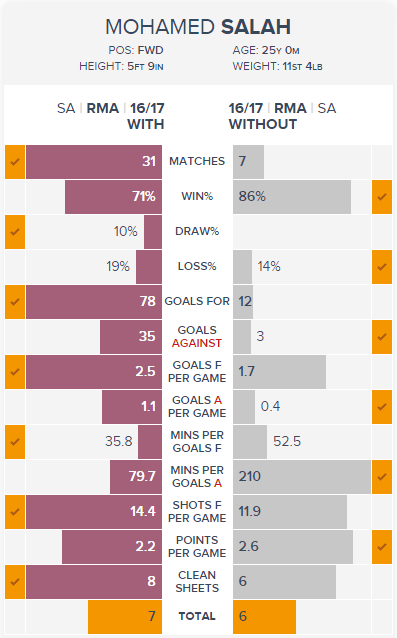 AS Roma scored at an incredible rate of 2.5 goals per game in the 31 top-flight matches in which the 25-year-old featured, with this figure falling to 1.7 goals per game when he was not involved.

Sadio Mane has brought some real pace and directness to Liverpool’s counter-attacking play and all the evidence suggests that Salah will do exactly the same: 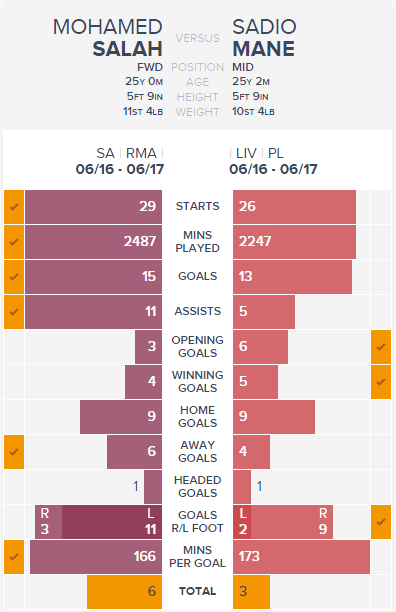 The duo were incredibly closely matched last season in Serie A and the Premier League respectively, though perhaps the latest Anfield recruit has more of an eye for an assist.

Watch the video below for more Salah v Mane Stats.

Finding a place for Salah, Mane, Roberto Firmino, Adam Lallana and Philippe Coutinho in the same starting XI could prove difficult, but it is a nice problem for Jürgen Klopp to have.

The Egyptian certainly brings the sort of energy levels that his new manager craves and his negative Stamford Bridge experience should result in there being plenty of fire in his belly.