Naby Keita has been linked with a move to Liverpool for some time now. Plying his trade in the Bundesliga for RB Leipzig, he was one of the standout performers during the 2016/17 season which rightfully saw him named in the team of the season.

Naturally, that’s seen him attract the interest of clubs across Europe and Liverpool are ready to smash their club transfer record for the second time in a £70million deal this summer.

Should such a move surface for the Guinean, Keita’s arrival would provide somewhat of a selection headache for Jurgen Klopp.

Liverpool already have a whole host of options at their disposal in midfield, with Coutinho set to drop into a deeper archetypal role alongside Jordan Henderson, Georginio Wijnaldum, Emre Can, Adam Lallana, Marko Grujic and Ovie Ejaria.

For Leipzig, Keita occupied a deeper withdrawn role in their 4-2-2-2 formation alongside Diego Demme, giving him the licence to roam forward while maintaining the discipline to track back and do his defensive duties.

Should Liverpool persist with their current 4-3-3 system, the Guinean would likely rival Wijnaldum and Lallana for their starting spots in particular, with both linking the midfield to the attack.

Given the financial outlay required to get Keita to Anfield, he’d be a mainstay in the team for next season. But which two players should partner him in Klopp’s midfield?

Here are some of the German’s options.

Jurgen Klopp could operate with a midfield trio of Emre Can, Naby Keita and Philippe Coutinho next season, with the Brazilian deployed behind the trio of Firmino, Mane and Salah.

Can would provide the steeliness and physicality needed in order to protect Liverpool’s shaky back four – a role he was so successful in during the later stages of the 2016/17 Premier League season. 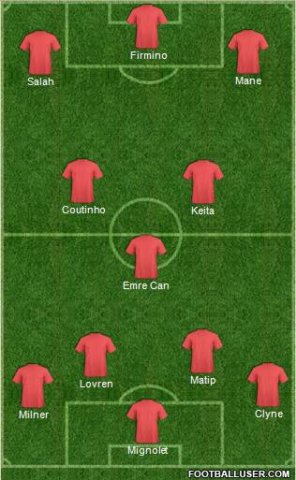 That would allow Naby Keita the licence to roam very much as he does with Leipzig, something that he’s naturally suited to given his all-round game. Having contributed eight goals and seven assists this season, the 22-year-old has a minutes per goal involvement average of 161, reflecting his prowess in the final third.

It’s a similar case at the opposite end of the field where Keita makes an average of 2.6 tackles per ninety minutes and 2.6 interceptions. There’s no clear weakness in his game as an attacking midfielder or defensive anchor, hence why a fluid 4-3-3 formation would be such a good fit.

Alternatively, a 4-2-3-1 system could be deployed with Coutinho behind the striker and Keita in a deeper role alongside Emre Can. That would be a very similar scenario to the Guinean’s role this season for Leipzig.

All three players bring a different set of skills to the table – Can with his physicality, Coutinho with his creativity and Keita with his all-round verve on and off the ball. It’s certainly a mouth-watering midfield trio for Liverpool fans to purr about.

Alternatively, Klopp could turn back to his captain Jordan Henderson to provide the anchor in midfield. Suffering untimely injury setbacks over the last few years due to an ongoing heel issue, Henderson has missed over 50 games since Klopp took charge. 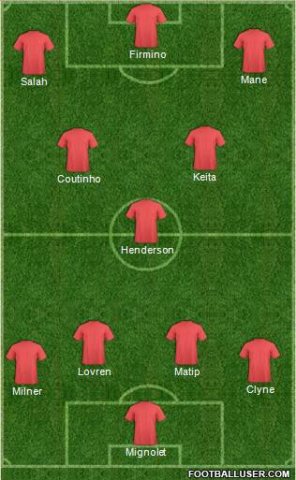 That’s a staggering statistic considering he’s the club captain, but when fit there is no question of what he brings to the side.

His passing ability on the ball is unrivalled, not to mention his ability to produce a corker every now and then – see that Chelsea goal, for example. Thus, it wouldn’t come as much of a surprise to see the Englishman return to the midfield when fit and firing next season.

An unlikely prospect, but another option nonetheless.

Plying his trade in a 4-2-2-2 formation, Keita is used to operating in a deep midfield role and could therefore have a similar role for Liverpool. He’s got the stats to back up his defensive qualities while having energy to burn.

Lallana could be pegged slightly deeper back than usual as a jack-of-all trades. His never-say-die attitude to win the ball back for his team make him ideally suited to such a role while his eye for a pass could lend a hand to Coutinho by way of creativity. 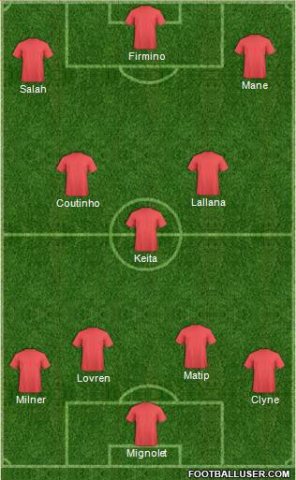 A similar case could be made for Wijnaldum to be fielded alongside Keita and Coutinho for much the same reason, having shown his ability to provide the link between both ends of the pitch.

It’s highly improbable given the lack of balance that could result but with four competitions to deal with, Klopp certainly has the tools and the time to experiment. There are plenty of quality options around.

Should Keita sign for Liverpool this summer, Klopp will have a huge selection headache. Squad depth is a great thing to have especially with Champions League football to contend with but it does leave him with some difficult choices ahead.

With plenty of top-class options to choose from, it’ll be one hell of a dog fight in midfield.