After Liverpool’s first defeat of the Premier League season to rivals Manchester City, it is possible that manager Jurgen Klopp could be tempted to dip into the transfer market.

Liverpool still hold a four-point lead at the top of the Premiership and whilst the current squad may have Klopp’s backing, it may be wise for the club to strengthen this month. 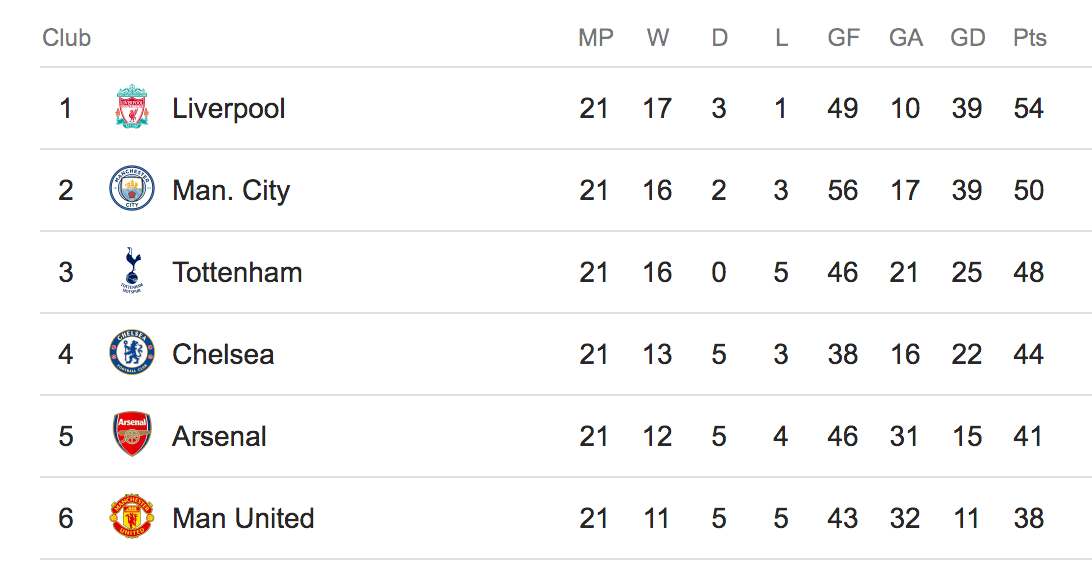 Having won all their December fixtures and enjoying a successful festive period, it is only a matter of time that fatigue may catch up on Klopp’s men.

Liverpool are still fighting on three fronts in the Premiership, Champions League and the FA Cup. That is why investment in the squad and bolstering the club’s chances of a first league title since 1990, may be the smart option.

A Quality Centre Half

With Joe Gomez out injured, Dejan Lovren’s form has been shaky in recent weeks. His misplaced pass against Arsenal led to their opening goal, while he was at fault for both of Man City’s goals in the 2-1 defeat.

Ajax defender, Matthijs de Ligt, at 19 years of age is one of the most talented defenders in Europe.

Technically, he is quick, strong and good in the air. De Ligt also likes to pass out from the back, which very much fits Jurgen Klopp’s style of play.

Having won the Golden Boy award, he is currently being coveted by the likes of Barcelona, Juventus, Paris St Germain and Manchester City. However, it is understood Ajax have not made any agreements with any of those parties and Liverpool could be an attractive option for the young defender.

On the international stage, he has formed a strong partnership with Virgil Van Dijk. De Ligt has also starred in the Netherlands’ unlikely run to the inaugural Nations League semi-finals, overcoming the likes of world champions France and Joachim Low’s Germany.

For Ajax, he is already captain of the Dutch giants and whilst Barcelona may be interested in him, it is highly likely they will prioritise signing his club teammate Frenkie de Jong, who is already becoming one of the best players on the continent.

Barcelona may have to invest somewhere close to €80 million on the playmaker. However, the vacuum left by the departures of Xavi and Iniesta has arguably made this area of the team their most pressing concern.

So, whilst PSG and Barcelona attempt to outbid each other for Frenkie de Jong, the January transfer window provides Liverpool with the perfect chance to approach de Ligt’s agent.

Liverpool’s performances in the Premier League and by occupying top spot, makes them a very attractive proposition for

Agents no doubt will be keen to attract the attention of a team like Liverpool.

De Ligt could also go straight into Liverpool’s starting line-up rather than warm the bench at Barcelona, waiting for the likes of Pique or Umtiti to be rested. Whilst, he would also find competition tough at French champions Paris St Germain.

De Ligt would also have Holland team-mates Virgil Van Dijk and Gini Wijnaldum as familiar faces to help him settle into life at Anfield if he made the move.

Liverpool currently have the most expensive defender in world football in Virgil Van Dijk. However, the Dutch teenager would fit the club’s philosophy of investing in young talent.

Van Dijk’s performances have a gone a long way to matching the 75 million price tag that Liverpool paid last January. It is not inconceivable that splashing out on de Ligt, for a similar fee to the one that the club paid for Alisson, could be every bit as worth it.

Liverpool have only conceded 10 goals all season in the Premier League but with Dejan Lovren highly culpable for those defensive errors, a strong, robust defender like de Ligt may be the difference in Liverpool winning ugly when it matters most. The challenges and pressures will only increase towards the business end of the season.

Having sold Philippe Coutinho a year ago to Barcelona for a staggering 142.5 million, Liverpool are yet to properly replace the man widely seen as their talisman and a gamechanger.

Xherdan Shaqiri may yet fill the void left by Coutinho but signing a player suited to that part of the field still remains a point of interest to Jurgen Klopp.

Liverpool came close to signing Lyon’s Nabil Fekir in the summer and were reportedly interested in Borussia Dortmund’s Christian Pulisic. So, it is safe to say that the club are actively searching for attacking minded players.

Step forward, Hakim Ziyech, Ajax’s number 10 and a wonderful player even if he is lesser known than someone like Fekir.

Ziyech is highly skilful. A good dribbler and has scored sensational free kicks for Ajax. He has an eye for a through ball and has contributed a large number of assists for Ajax this season.

Like de Ligt, he has featured against some of Europe’s top sides in both the Europa League and the Champions League. Ziyech is loved in Morocco for helping his country qualify for last season’s World Cup.

His confident character and cheeky goal celebrations would be a welcome addition.

Some Hakim #Ziyech numbers in @AFCAjax this season: @eredivisie

Liverpool shouldn’t face too much competition for his signature although it remains to be seen if Ajax would sell during the mid-season. Whilst, Ajax fans may be unwilling to lose both de Jong and Ziyech.

The Moroccan would be significantly cheaper than Fekir and will only get better if given the platform to perform.

As Jurgen Klopp’s men continue to hunt down the Premiership title, acquiring Hakim Ziyech this month may be the perfect boost, both on and off the field.