According to reports in Germany, Jurgen Klopp wants Gladbach midfielder Florian Neuhaus and the club have already held talks with his representatives. Florian Plettenberg of Sport1 expects things to heat up once Germany’s time at the Euros is up.

As revealed by Plettenberg on a recent Blood Red podcast, the 24-year-old had an agreement with Gladbach that meant if a certain bid was received, he’d be free to talk to the club. However, this has now expired meaning the Bundesliga side are under no obligation to accept any offers this summer.

Plettenberg did, however, say that a bid in the region of €45million could tempt the club into selling the Germany international. It might seem like a steep fee, but in today’s exchange rate, that’d be roughly £38million. That seems to be within Liverpool’s budget, with the club rarely spending north of £40million.

You’d also have to assume that Neuhaus wouldn’t be on a huge salary if he made the move to Merseyside and this brings the total cost of the deal right now. The 6ft midfield maestro reportedly earns £30,000-per-week at Borussia-Park.

Even if Liverpool doubled that, he’d still be one of the lowest earners at the club.

That side of deals is often overlooked. Yes, Sven Claes claimed Leicester City might sell Youri Tielemans for £58million this summer. You could make a case that spending £20million more on a younger, Premier League proven midfielder with a better reputation can be justified. But can you imagine him accepting a similar salary to Neuhaus? That is how costs can spiral.

To say he’s a progressive player would be a bit of an understatement.

This is what I was on about when I said he's fairly direct. pic.twitter.com/4Q8veNCQvH

As evidenced by his pass map, courtesy of Twenty3, he’s very direct when in possession. Some midfielders like to dominate the ball and it can often be a little sterile. Neuhaus is always looking for that incisive pass to get his team deep into the final third.

There are examples of this below, using the KeyFrame Sports tool to annotate the stills. 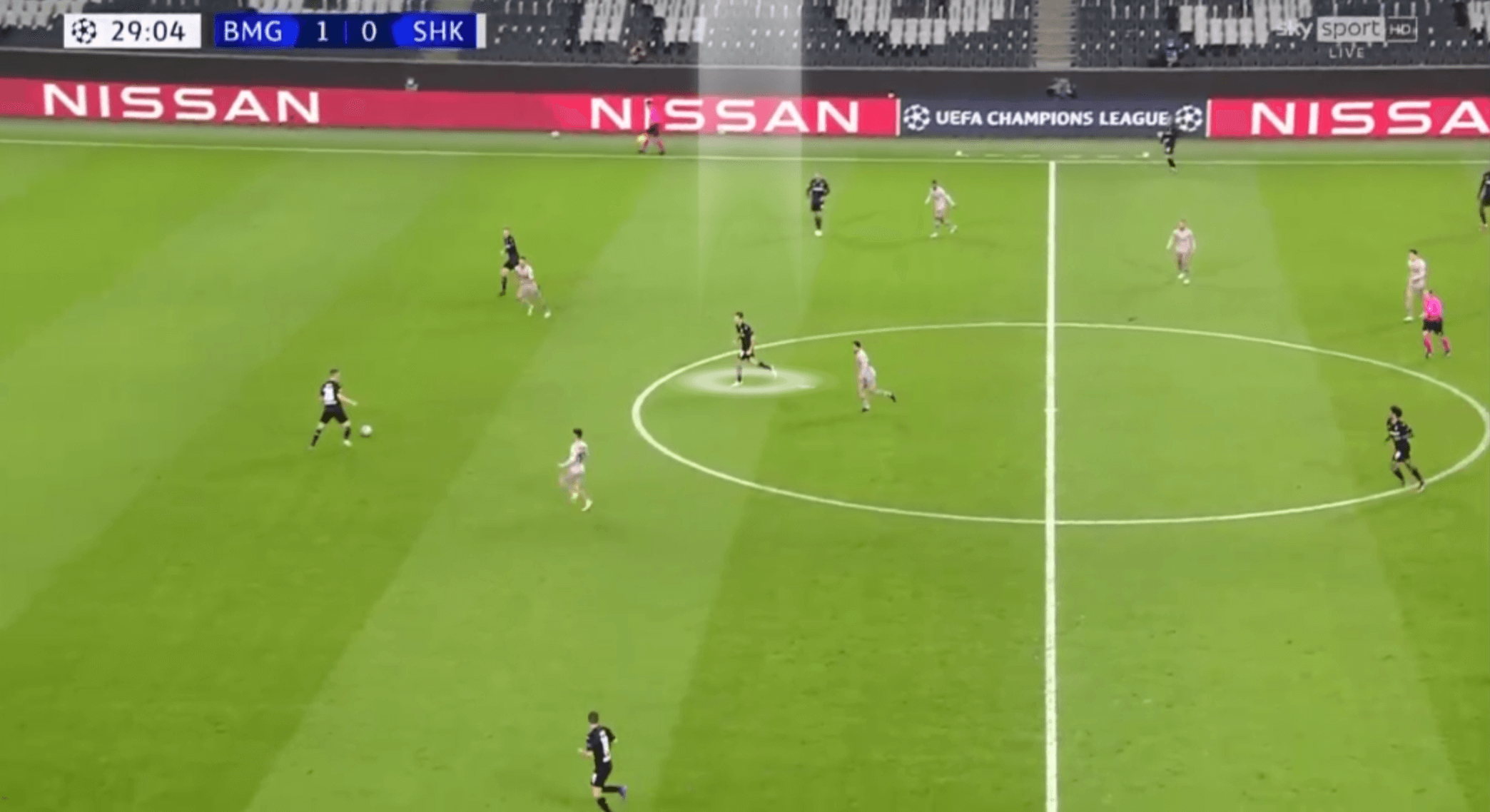 Neuhaus, highlighted, drops to receive a pass off his centre-back. Though he was predominately deployed on the left of a midfield two, you’d often find him dropping into the areas usually associated with a single pivot.

He’s being closely followed by the Shakhtar player with the visitors looking to press fairly high. 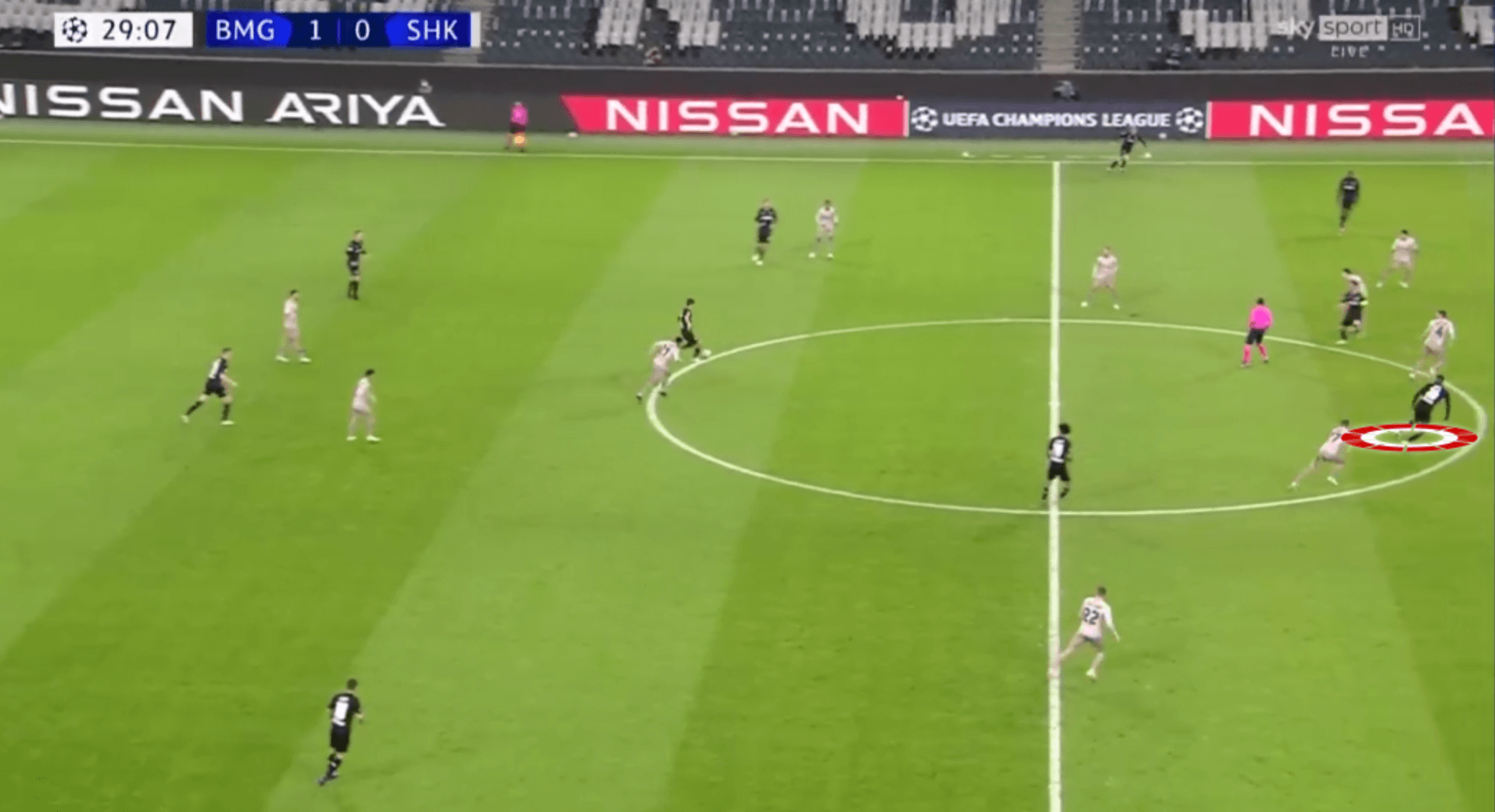 With a drop of the shoulder, Neuhaus spins away from pressure. He doesn’t even take a touch before playing a pass, with his weaker left foot, over the top of the Shakhtar defence. He puts Alassane Plea in on goal but he’s unable to convert.

That is a glimpse of how aggressive the No32 can be at times. Gladbach went from back to front in the blink of an eye.

Given how press-resistant he is, Neuhaus would also be an asset for teams trying to retain possession. He’s deceptively robust for a player of his physique and he seems to have a knack for bouncing his way through opponents while keeping hold of the ball. In that sense, he is similar to Wijnaldum.

A criticism I’ve seen levelled at him is that he’s not much of a presser. Per FBRef, he attempts 13.09 pressures per 90. This puts him in the bottom 10%. At first glance, this doesn’t really seem like a Klopp midfielder. However, that per 90 average is higher than Wijnaldum, Jordan Henderson and Fabinho.

You also have to factor in that Gladbach weren’t a high pressing team last season, ranking 11th in the Bundesliga for Passes Per Defensive Action (PPDA). He might have a level to go up in that particular area, just the German side didn’t need that from him.

One of the biggest positives about Neuhaus is his durability. His last injury was in 2017. He’s played at least 2,100 minutes per season for the past four years and last season he started 30 of Gladbach’s 34 Bundesliga matches.

He ticks a lot of the boxes and just profiles like a Liverpool signing.