Liverpool went down to a 1-0 loss in Portugal early yesterday evening. A penalty conceded by Soto Kyrgiakos decided the game in the first half. A lacklustre performance really and it’s quite surprising that our pass total was quite high once again. We made around 582 passes and it seems to me that we always seem to pass the ball more when we are losing and chasing the game (I guess it’s obvious really).

In my opinion there were not enough shots on goal, although Liverpool did out muscle Braga with more possession and aerial duels won. This is key because we’ll need a lot more of this at Anfield, and remember Arsenal lost 2-0 to Braga in Portugal. In the home leg Arsenal walloped them 6-0.

We’ll need to play at our best, just like we did against United if we want to qualify. If we are able to replicate the performance against United it will be pretty much a sure fire thing that we’ll be through.

I’ve displayed the basic match stats below for your viewing pleasure. Please log in and comment on the stats. 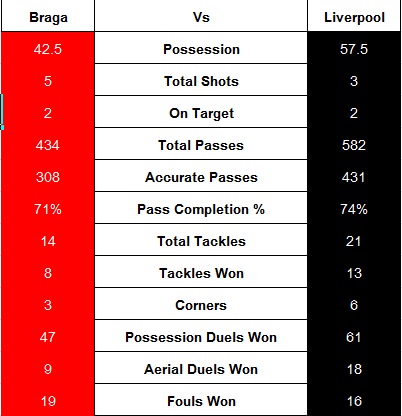 The pass completion totals were a little misleading. Poulsen and Spearing getting very high percentages but their contribution in my eyes wasn’t game changing, although they were solid in the 2nd half. Their stats are very similar to Lucas Leiva’s, but do we really need three Lucas Leiva’s in the team? One is enough and he’s doing a fine job and is more mobile than Spearing or Poulsen.

Liverpool definitely were better in the 2nd half without having too many clear cut chances and I’d attribute this to Andy Carroll’s presence in the air. Braga were very worried about the big man’s heading ability but even on the ground Andy won 73% of ground possession duels which is third to Carra and Skrtel only. Carroll coming on after half time caused the Braga team to back off and allowed Liverpool to have the ball as you can see from the possession stats above. I don’t think Liverpool have had a 57% or above possession percentage away from home in the league this season. 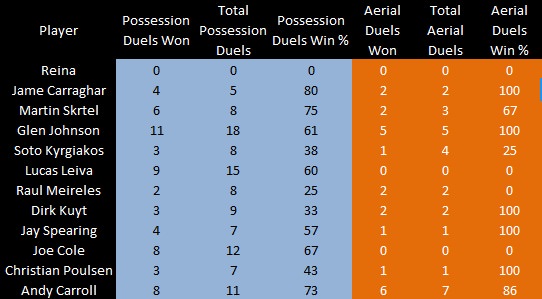 Suarez and Gerrard were sorely missed, but I’d even go as far as saying Maxi Rodriguez would have helped in this game. Meireles were below par last night after a great showing against United and Joe Cole is just not having a good time at the minute. The shocking stat that we tweeted after 41 minutes of the game show that his confidence is not where he’d like it to be.

The tweet stated that Cole had entered the final third of the pitch on two occasions only in the first 41 minutes which was the same amount as our defensive midfielder, Christian Poulsen! Shocking, and it definitely needs improvement.

Even though the stats show that we dominated the game in the end because of a strong 2nd half it was not a good performance from Liverpool. If we play like that again next week we will not progress in this competition, which is our last hope of silverware this season.

If you subscribe before 1st April 2011, we’ll upgrade you to the Full Member subscription; giving you access to the stats for free (normally ВЈ4.50 per month). Find out which other features you’ll have access to: Why Join Us?