It’s been a disappointing week in the Premier League for the supporters of Liverpool FC as the team lost back to back games to Aston Villa and West Ham United. What was even more frustrating was the manner of the defeats, devoid of the attacking verve shown against Tottenham and bereft of the pressing style of play we’ve grown accustomed to in 2014.

In this article I’m going to briefly look at the pressing action numbers from the first five games of Liverpool’s Premier League season.

If you’re a listener of the Anfield Index Podcast (available on iTunes too) you’ll be familiar with these statistics as we cover them in a segment every week.

However, if you’re new to the Pressing Action statistics that we collect on AnfieldIndex.com we manually sit through the game and record each “pressing action” by pausing/playing the feed and analysing each and every pressure type or action towards the ball/player when Liverpool are out of possession.

So this year we’ve added a failed pressing action where a player’s attempt to press isn’t successful (opposition is able to move the ball forward) and also some other additions where pressing actions led to shots or even goals.

The stats we collect are as follows:

So let us look at the first five games of the season:

Beginning with the totals, the Spurs game was the obvious major standout with 223 Pressing Actions, then Southampton, Manchester City, West Ham and then the dismal Aston Villa game at Anfield. On the surface there is a trend emerging, with the three defeats also coinciding with the games involving the fewest Pressing Actions attempted. However, these total Pressing Action stats don’t really tell you the full story.

As mentioned earlier the Pressing Efficiency (PE) is another indicator we can use to measure how well the team pressed the opposition. Once again, the game at White Hart Lane is at the top of the list with a PE of 80.72%. This metric tells us that 81% of Liverpool’s Pressing Actions were of a positive nature in the Spurs game. The Manchester City game surprises with a very high efficiency of 79% too.

However, the Opposition Passes per Pressing Action (OPPA) metric is telling for the Manchester City game as it was 3.46 OPPA. This was the second worst performance of the season and what this stat indicates is that Liverpool didn’t press the ball as much as they did in the other games. The lower this figure the more Liverpool pressed the opposition when they were on the ball for example the Spurs game again is top with 2.46 OPPA and the Southampton games comes next on 2.64 OPPA.

The OPPA figure for the Aston Villa game is horrendous with 4.48 opposition passes per pressing action – by far the worst performance of the season and we could see a distinct lack of pressure on the opposition whenever Liverpool conceded possession, which wasn’t very often but still you’d expect Liverpool to press at a higher level than this.

When looking at the numbers there is always the need for context and there have been many changes since the Spurs game. Liverpool went into the international break with real impetus after a brilliant performance but once the players returned Brendan Rodgers was without Daniel Sturridge, Joe Allen and Emre Can.

The loss of two of these players, in my opinion, has had a direct impact on the first team. Daniel Sturridge, at this moment in time is irreplaceable for Liverpool FC, and not from a Pressing Action point of view, his overall play is integral to the way this Liverpool side is set up. Joe Allen has always been an important component of the Anfield sides’ pressing game, as stated on the AI Podcast many times last season, and Emre Can’s unavailability has hurt the squad as he’d be playing in place of Joe Allen right now.

Could fatigue be an issue? This Liverpool squad aren’t used to playing three times in a week, so could it be that Jordan Henderson and Steven Gerrard have been overworked? There is also the argument that the season has only just begun so there should not be any fatigue at this stage, nevertheless, the counter point is that both of Liverpool’s central midfielder played at the World Cup also and joined pre-season late.

You’d have to say that the lack of pressing from this Liverpool side in the last two games is down to mixture of both the personnel missing and fatigue. The fact that Allen and Can are side-lined has forced Rodgers to field Gerrard for all three games this week and the same for Henderson. The trio of Lucas, Gerrard, and Henderson wasn’t successful last year as shown in the games away at Arsenal and Hull; this was also down to the loss of midfield players in the squad, as Coutinho also picked up an injury.

I’m confident enough to say that once Sturridge, Allen and Can are fit and in or around the first team, we’ll see a return to the Spurs performances. However, the worry for Brendan Rodgers and Liverpool supporters right now is that the current side doesn’t look like it’ll be able to get up to that level – especially on the basis of the Aston Villa and West Ham performances. Here’s hoping they prove me wrong against Everton this weekend! 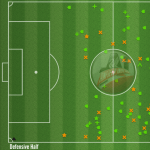 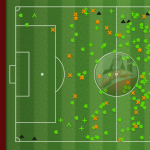 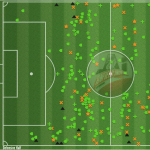 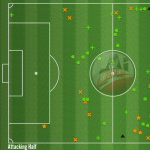 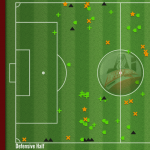