A superb win for Liverpool FC, which totally hinged on the decision midway through the first half when Liverpool were awarded a penalty. The decision for the penalty was an incorrect one and this changed the whole game. However we are thankful for the decision especially after we’ve been on the wrong end of decisions in the past (See the unforgettable beach ball goal last year).

Below you’ll see the basic match stats. In the first half Sunderland had far more possession but the sending off also made a big difference to the possession stats displayed below. The sending off also enabled us to have more of the ball and push up the pass completion. The important point is that Liverpool were 2-0 when the game was 11 v 11 so don’t listen to any fans who try to say we won because the opposition was down to ten men! 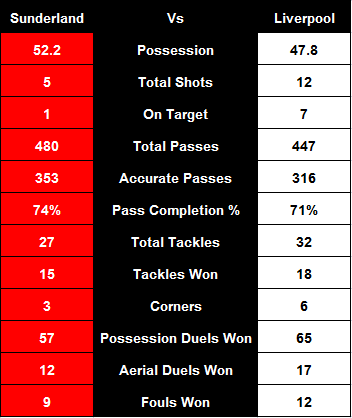 Basic Stats at Full Time Vs Sunderland (A)

The player passing stats are displayed below and Jay Spearing starred for Liverpool with the highest Pass Completion % of any other Liverpool player today. Jay’s percentage was 76% with Lucas and Dirk Kuyt very close behind with 75% completions. It’s much lower than the norm for Lucas but a poor first 20 minutes really hurt them here today. It was important that Daniel Agger played today as Liverpool seemed much stronger at the back and Skrtel seems much happier playing on the right hand side of centre back pairing. Daniel Agger’s passing stats are quite low but that’s because he’s always trying to play a forward pass rather than play a “safe” ball like Skrtel or Carraghar. 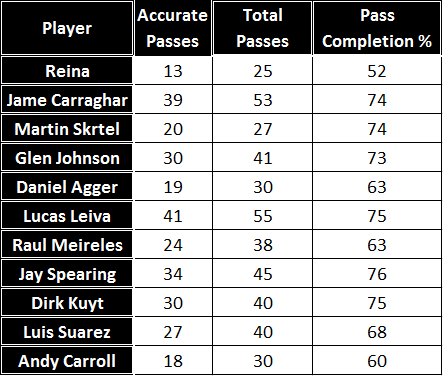 Player Passing Stats at Full Time Vs Sunderland (A)

The top passer for the game was Lucas Leiva, who’s now consistently becoming the hub of all passes at Liverpool.  Lucas didn’t start too well and in the early stages only had a 50% pass completion rate. He rebounded well finished up with a 75% total. The Man of the Match Luis Suarez completed 68% of his passes. We noticed that early on his % was as high as 78%. However there was a phase in the game for him where every lay off or pass was just in front or behind a player. This phase of play hindered his over percentage otherwise it was a spectacular performance from Luis.

Player Shot Stats at Full Time Vs Sunderland (A)

The shot statistics displayed above show that Luis Suarez and Andy Carroll very influential in the game. They had 7 out of the 12 shots that the team managed with four of them on target. Carroll was very unlucky not to score with his header again blocked in front of goal, at least this time it was the opposition that blocked it and not Dirk Kuyt! Luis Suarez also had an effort well saved in the first half and then took his goal brilliantly. Dirk Kuyt was given the assist for Luis Suarez’s goal by Opta but it really had nothing to do with Dirk. Luis took the ball and got past the defender and then rifled a shot in between the keeper and the post. A great finish from Suarez who was sorely missed on Thursday night. I’m just glad that he should play every game that Liverpool are involved in now.

A good win for Liverpool but it was hinged on the decision in the first half. We’ll produce a full report a little later.