The first part of this two part series concentrated on defending and some shooting stats. In this second instalment we’re going to be concentrating on the creative aspects of Glen Johnson and Martin Kelly’s play. We’ll be covering passing, chances created, crossing and successful dribbles. (Click here for Part One: “Glen Johnson and Martin Kelly Full Back Comparison“)

Martin Kelly only has five successful dribbles. It may seem as though he’s done many more than this but the stats are based on a dribble that ends up with a successful pass or cross which isn’t always possible. Martin’s definitely done better than the stats suggest which state that he’s made a successful dribble every 172 minutes. Let’s not forget that Martin, first and foremost, is a centre back so expecting him to do really well with these attacking stats is a little unfair. He’s still done brilliantly as a full back regardless of the statistics. 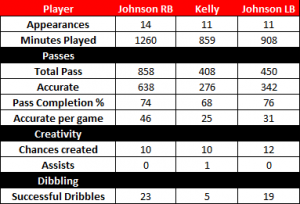 Comparison of Martin Kelly and Glen Johnson's passing and creativity

The pass completion statistic is the headline statistic for many of our readers. Lots of people believe it’s the real barometer of judging how a player has done in the season as it shows whether they’re able to keep the ball or not. It’s definitely a good statistic to have but shouldn’t be used against players. For example Steven Gerrard hasn’t had impressive statistics in some games with his pass completion percentage because he’s always trying to play the difficult pass, which if successful, could unlock a defence so it also has a high chance of being intercepted. Should this be held against a player? I don’t think so. It’s important to add context to each stat.

The reason we’ve given the explanation above is because Martin Kelly’s pass completion percentage is at 68%. This statistic shouldn’t be taken as a negative. It’s Martin’s first season where he’s had a run with the team and he has impressed everyone. At full back he’s overlapped Dirk Kuyt and got forward at every opportunity to put in plenty of crosses. Out of his 408 passes, 31 were crosses representing around 7.5% of his total passes. Martin averaged a cross, approximately, every 28 minutes. That’s not a bad statistic in comparison to Glen Johnson’s performance at right back.

Glen Johnson’s pass completion percentage, at right back, was 74% (638 successful passes out of 858). Glen managed 59 crosses out of the 858 passes attempted at right back. The crosses represented 14.5% of Glen’s total passes. England’s right back managed a cross every 21 minutes under Roy Hodgson, which is quite an impressive statistic.
As a left back, whilst playing under Kenny Dalglish, Glen Johnson’s pass completion percentage has improved to 76% (342 successful passes out of 450 attempted). Only 5% of Glen’s passes were crosses at left back. He has only managed 23 crosses at left back at a rate of one cross per 39 minutes. This is almost a third of the number of crosses managed at right back and almost doubled the length of time per cross delivered.

The number of passes per game has also decreased, as shown in the stats above, with Glen managing 46 successful passes as a right back and 31 as a left back. We cannot really compare total number of passes (accurate) as Glen has played more as a right back this year, which is why we’ve used the passes per game statistic. Whilst Glen’s defending has improved at left back his attacking play has diminished significantly.

Martin Kelly’s successful crossing stats are pretty impressive as 26% of Martin’s crosses have found a Liverpool player (8 out of 31). However the same cannot be said about Glen’s accuracy from the attacking full back position. As a right back, Glen Johnson managed 8 successful crosses out of 59 (13.6%) which is much lower than Martin Kelly’s performance. At left back only 13% of Glen’s 23 passes found a red shirt. So whilst Glen Johnson’s crossing accuracy has been consistent as a left or right full back, he has been half as accurate as Martin Kelly. As Rafa would say, interesting no?

One of the most important stats displayed above is that Martin Kelly has one assist this season, it came at Blackpool for Torres, whilst Glen Johnson has none at all. Pretty disappointing from Glen.

Looking at the stats from both parts of this article it’s safe to say that Martin Kelly has had an impressive eleven appearances for Liverpool (10 if you disregard his six minutes against Aston Villa at Anfield) and has had a very high tackle win percentage as well as impressing with his creativity from the right back role. A successful cross percentage of 26% was double that of the more experienced and English International Glen Johnson. A super effort from Kelly this season but that being said there are a lot of aspects that can be improved. Aerial duel win percentages were pretty low for his height as well as possession 50/50’s. If Martin is to continue at right back he will need to increase the number of shots attempted as he’s only had one on target this season.

Glen Johnson’s stats are intriguing because he’s improved in creativity on the left whilst his shooting has decreased from this position. We’d expect Glen to cut inside on his right foot and shoot more often as he’s more comfortable on his right foot. The stats do show that his shot accuracy has improved whilst playing on the left even though the frequency and amount of shots decreased. Apart from that there were quite a few statistics which showed that Glen was quite consistent on both sides with tackle win percentages and 50-50 duel wins being in close proximity whilst he improved in the aerial duel statistic. It could be said that his reading of the game is not as good at left back judging by his interception statistics, as stated in part one.

Overall both players have been pretty impressive in totally different areas since Kenny Dalglish arrived at the club earlier this year.

A summary of Liverpool FC’s performances depending on where Glen has played at fullback (when played at least 45 mins):

The improvement in results is there to see when both Kelly and Johnson have played in the same side with 57% of the games having cleansheets. Although we cannot attribute the improvement in results solely to the change in Glen Johnson’s position or the addition of Martin Kelly at right back, what we can say is that these changes combined are ONE of the reasons that improved Liverpool FC considerably when Kenny first came in. Add the improvement in Meireles’ form and the solidity of the Agger/Skrtel central defensive partnership and you’ll have the main reasons why Liverpool improved in January/early February under the stewardship of Kenny Dalglish.

Coming back to the fullbacks in question, Liverpool FC will miss these two players considerably against Manchester City tomorrow night. Let’s hope they don’t miss them too much and that they can recover from their injuries fast enough to help us in our quest, however slim the chances are, for fifth.