Although some Liverpool fans may not consider the Europa League as a prestigious competition, 1200km from Anfield, the WWZ arena is being prepped to accommodate the Reds in what is being labeled as the biggest match in the Bavarian’s side history. 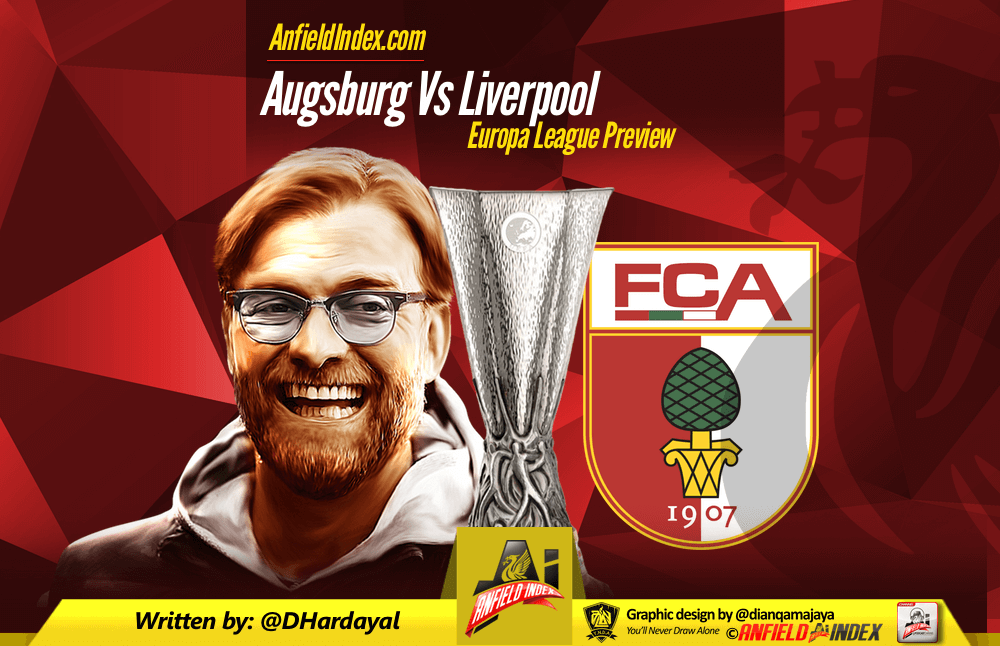 Manager Markus Weinzierl, is largely acknowledged as one of Europe’s brightest young coaches. The 41-year-old has lead his side of supposed misfits to European qualification for the first time in the club history after a very impressive 14/15 campaign. The managerial prodigy will be hoping to top any previous achievements by progressing to the next round of Europa League.

The loss of star players such as Baba Rahman (who made his big money switch to Chelsea in the summer), Pierre Højbjerg (end of loan and Tobias Werner (long-term injury)), mixed with the demands of a stacked fixture list has been a shock to the system for Weinzierl and his men this season. Having floated the relegation positions at the start of the season, the Bavarian club ended the Hinrunde strongly and put on a valiant display to qualify from the group stages of the Europa League, Augsburg have struggled to find the any consistency they exhibited last season since then.

Jürgen Klopp’s return to Germany may be bitter sweet, Klopp’s last match vs Augsburg ended in 1-0 shock defeat last February, leaving Dortmund just 2 points from safety. The events that proceeded were broadcasted around the world, with captain Hummels and Roman Weidenfeller shown in deep discussion with concerned fans in the stands. Klopp will be looking to put those memories to bed, albeit holding a healthy record against Weinzierl.

The Fuggerstädter are expected to line up as a 4-2-3-1, Marvin Hitz will be the man between the posts, not considered among the elite group of goalkeepers in the league, Hitz is more than capable of pulling of a remarkable performance every now and then and has been one of Augsburg best performers this season.

The back four will be slightly disjointed due to a few injuries, Jan-Ingwer Callsen-Bracken is set to miss out, and potentially Jeong-Ho Hong, after suffering a muscle injury obtained during the weekend derby against Bayern.

January signing Jeffrey Gouweleeuw is ineligible having played for AZ in this competition earlier on this season.

Veteran Ragnar Klavan is therefore expected to start alongside either Hong (if fit) or Christoph Janker. Philipp Max and Konstantinos Stafylidis are vying for spot at Left-back, both offer competent threat on the overlap whilst on the attack.

Netherlands international and captain, Paul Verhaegh will start at right-back, Verhaegh is a consistent performer and is also Augsburg penalty taker and is usually clinical from the 12 yard spot.

Bayern continued to split open Augsburg defence on Sunday, especially after Hong went off, if Klopp decides to start our three musketeers (need to think of a better nickname for Firmino, Sturridge, Coutinho), then I’d expect them to reap a few benefits.

Another major loss is one of the Bundesliga’s most underrated midfielders over the course of the last few seasons, Daniel Baier is set to miss the match due to injury. Baier reads the game comprehensively and offers an essential shield to the back four as well as being a composed figure on the ball.

In his place, Dominik Kohr and one of Ja-Cheol Koo (who may start in a more advanced role) and Markus Feulner will sit as the two in midfield.

I’d expect Liverpool to control proceedings with Augsburg sitting deep, looking to hit Liverpool on the counter. Wingers Caiuby and Alexander Esswein are both blessed with great pace and look likely to hold the width for Augsburg.
Clyne and Moreno will probably have their work cut out against them if they bomb forward without caution. Caiuby also poses a terrific aerial threat, so it’s important we attempt to deny any situation in which Caiuby is isolated with one of the full-backs.

Weinzierl also has limited options with his attacking midfielders with Piotr Trochowski and Jan Moravek both ruled out for this encounter, so Halil Altintop may start in the no. 10 role, although the former Turkish international has failed to register a goal this season.

A name many might be a bit more familiar with; Raul Bobadilla, is expected to lead the line. The Paraguayan is no stranger to Liverpool having faced the side with his former club Young Boys. The Burly striker scored a classy finish against the Reds last time out, and he’ll pose as Augsburg’s main threat out this time round too. His strength will most likely cause our centre-backs trouble, Bobadilla is also more than capable of producing something incredible of the ordinary, possessing a thunderous shot which also makes him a threat over set-pieces.

It’s important not to write Augsburg off purely by looking at their table position, Augsburg will be eager to get on the pitch to flaunt their talent on this big occasion, the side have pulled off more than a few shocks in recent seasons and with an experienced squad I don’t expect them to be too phased by the occasion. I would still expect Liverpool to come out on top if Klopp does indeed field a strong XI although I’m not too convinced we’ll be able to keep a clean sheet.