This Marko Grujic interview was originally found in http://www.blic.rs/ and was translated into English by Vlastimir Stevanovic.

“Everything started with the now famous phone call from Klopp. No one told me that he was going to call, I didn’t know anything about it. I was just sitting around when my phone started ringing and I saw a number on the screen starting with +44… England! When I answered, I immediately recognized that German accent, and that voice. I’ve been listening to his interviews a lot. He did most of the talking and told me about the plans that he had for me. My only request was that I didn’t want to be loaned out, I just want to play for Liverpool. He was very open, told me about how he sees my development… When a coach like that calls you on the phone personally, that’s the greatest privilege! Greater than being called by a CEO or the director of football. And what a coach called me! That call really cemented my desire to join Liverpool.” 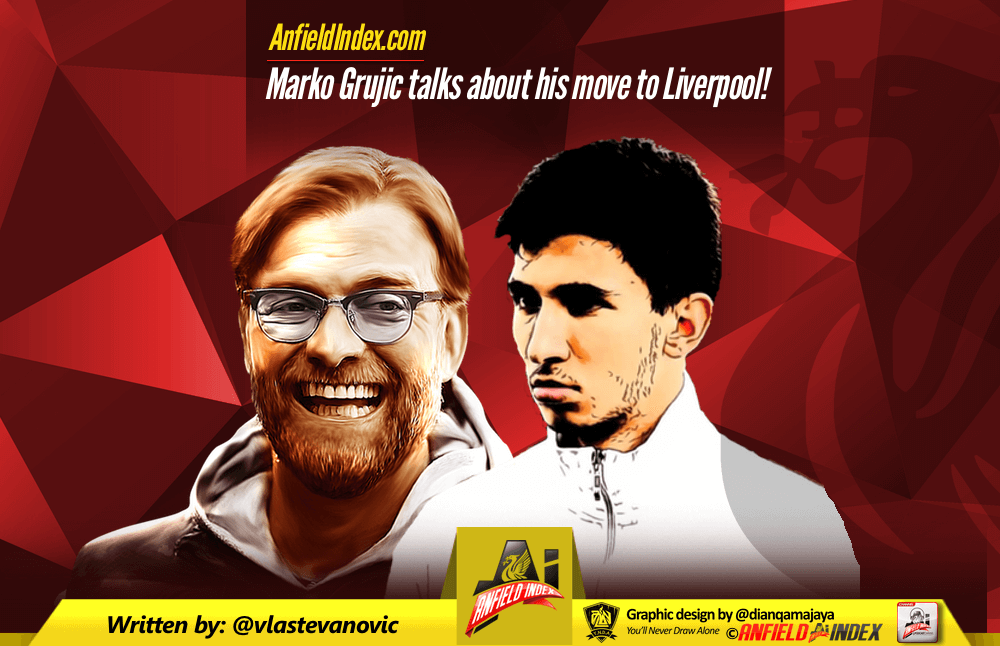 “Six months or one year ago I had a picture of Klopp on my Instagram, neither of us were even close to Liverpool back then. It seemed destined to happen. I could not have chosen a better coach. He is famous as someone who likes to work with young players. He has made Subotic, Lewandowski, Kagawa.”

“After the game with Cukaricki, I sat with my manager Stojadinovic and with Liverpool representatives. They had made video clips of some of my games, games I didn’t even know were being filmed. For example, there was one video of a game when I played for the national team under Ivan Tomic in some small Slovakian village. I was astounded! I said, “Guys, who filmed this? There were only 20 people in the audience.” This is a testament to their commitment. They also pointed out some negative things in my game. They didn’t come to persuade me with the attitude that I’m all wonderful and lovely, and that I’m as good as Ronaldo or something like that, which I liked.”

“Klopp didn’t mention any names of the players that I should replace, or positions that he sees me in. He told me that is entirely up to me. His vision is the I should be something between a so called number 6, and a number 10. What they call a box-to-box midfielder. I would play both in the attack, and have responsibilities in the defence. Something between Lucas Leiva and Coutinho.”

“Melwood is somewhat newer than Anfield. It is a really pretty training camp that has everything you’d ever want from a training camp. As far as Anfield is concerned, I noticed that the door on the Home dressing room are smaller that the Away room. This was done on purpose to make Liverpool players seem larger, taller and stronger. To strike fear in the opposition. The away dressing room is super modern and comfortable so that the players of the away team would relax, and then after coming out on the pitch they wouldn’t know what hit them. HA!”

“I’ve met all the players! And what a way to meet them. I had just finished all my examinations, and I climbed upstairs where I saw all of them having lunch! I almost passed from excitement, my heart almost stopped! Klopp wasn’t there, but the assistants were. I approached everyone and greeted them. I went weak at the knees with excitement but I sat down and had lunch. After that I went to have some more tests. I will remember this forever!”

“I remember Istanbul and the famous game with AC Milan. A good part of the Liverpool FC museum is dedicated to that game. Every player who comes here has to go there to feel the greatness of the club. I’ve seen Xabi Alonso’s boots!”

“I really got the feeling of how big the club actually is. I felt what it meant for players to touch the “This is Anfield” sign when coming out of the dressing room. I also understood the significance of Steven Gerrard’s number 8! I don’t think that there will ever be a person worthy to wear that number in Liverpool FC. Maybe some superstar, or something like that.”

“It was crazy on social networks! I don’t even know how many messages I got! I couldn’t reply to all of them and thank them.”

“Some people are sceptical and say that the Premier League is really hard. I am completely confident, and I hope that I will completely adapt after three months or so. The players in Liverpool are phenomenal, so I have to work on improving my physical strength.”

“The upcoming six months will be very important for me. I will have a lot of work to do in addition to my trainings and games at Red Star. I have to become strong enough because I want to be able to go into a duel with anyone! Even with top players! Players are really strong in the Premier League. Liverpool players looked physically flawless. Wide shoulders, and strong legs! Everything is on the highest level.”

“I would choose Liverpool over Real Madrid and Barcelona! I love them! I love the Premier League because of the energy and the general atmosphere.”

“When I spoke with Klopp, he told me that Zeljko Buvac is his brain in the training sessions. He seems quiet, he talks little, but he says a lot. Klopp explained to me that he is much more emotional than Buvac. He likes to shout, and yell or jump. He is closer to players than Buvac. Kolarov called me to offer help and told me to call him for whatever I may need. Matic called to congratulate. Dejan Lovren really cheered me up and impressed me. He was a good friend with Lazar. He welcomed me with the words, “Is it finally over? We Balkan boys have to stick together!”

“When I told Klopp that I was really close to winning the title he told me that he already knew that. He called me after one game to tell me that it was a really hard game. He actually watches Serbian League! He understood my wish to see this season off.”

“I spoke with Lazar Markovic, and he told me good things about the club. He told me that Liverpool is a great club, that the pressure and expectations are enormous, and that the first 2-3 months are the most important. I will have to prove myself during that period and show my qualities. Maybe I don’t have to show everything I know, but I will have to show what I am made of! I am very confident!”