The Reds made hard work of it but they’re through to the last 16 of the Europa League. The English media often treat this competition with disdain as though it’s the European equivalent of the League Cup. Their ignorance is astounding as this year’s final 16 rivals anything the Champions League could offer.  Excluding the two English sides, United and Spurs, these are the potential sides Liverpool could face. 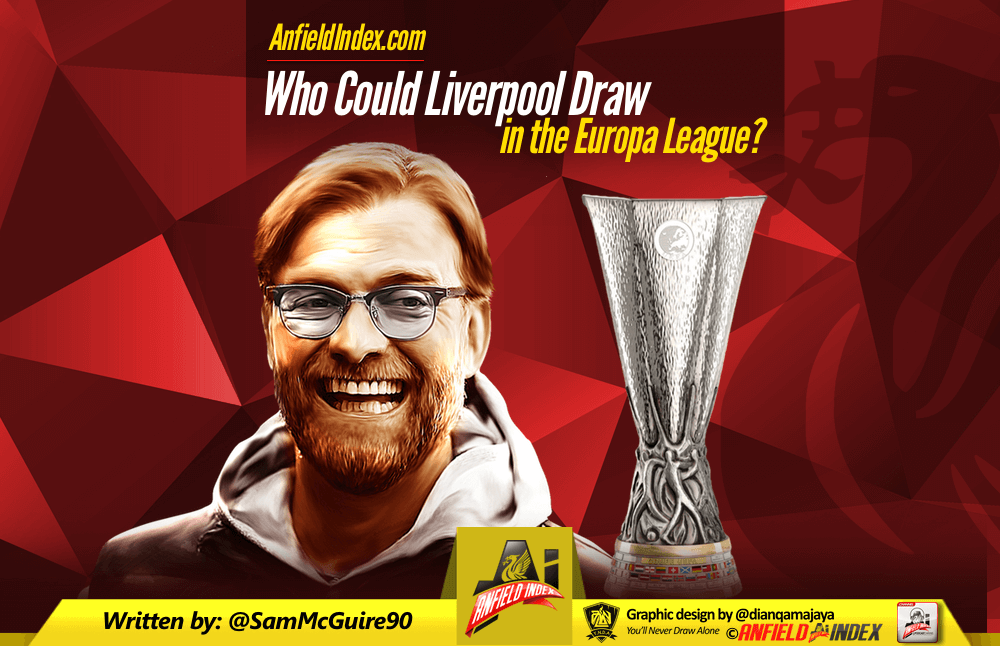 The Turks are currently second in the Turkish Premier League, a single point behind Besiktas. Their Europa League group campaign culminated in a 2nd place finish and they made it through to the round of 16 having defeated Lokomotiv Moscow 3-1 on aggregate.

Bayer may feel aggrieved to be in the Europa League having only dropped out of the Champions League on the head-to-head rule. They finished level on points with Roma and had a far superior goal difference to the Italians but having lost 3-2 in Rome their journey in Europe’s elite competition came to an end.

They made it into the last 16 by comfortably defeating current Portugese league leaders Sporting Lisbon 4-1.

The Czech side are currently second in their national league and progressed to the round of 32 having finished as group runners up to Schalke.

In their round of 32 match they defeated Krasnador 4-0, an impressive achievement when you consider the fact the Turks topped their Europa League group which contained Dortmund.

The Spanish side are currently 8th in La Liga but they up their game against better opposition. They beat Barcelona 4-0 in the Super Cup earlier in the season.

They topped their Europa League group and made it through to the round of 16 by beating Marseille 2-1.

The Ukrainians are currently joint top of their national league and have just defeated Schalke 3-0 in Germany to progress into the next round.

They started off in the Champions League this season but finished third in their group behind Real Madrid and PSG.

The Italians are into the round of 16 after an impressive 4-2 victory over Galatasaray. They finished top of their group with Saint Etienne as runners up and they’re currently 8th in Serie A.

Gary Neville has started to win games with the Spanish club after a horror show of a start. The Spaniards hit ten past Rapid Wien as they made their way into the last 16 having dropped out of the Champions League, finishing a disappointing third behind Zenit and Gent. They currently sit 11th in La Liga.

The Europa League specialists and current holders are through after a routine 3-1 victory over Molde. They dropped into this competition after finishing behind Manchester City and Juventus in their Champions League group.

What should have been a hard match against Porto was relatively easy for the German giants as they won the tie 3-0 to send them into the last 16.

This comes after finishing 2nd in their group behind Krasnador. Klopp’s ex-team currently sit in second place behind Bayern in the Bundesliga.

A last minute goal sent the Swiss side through on away goals after a 4-4 draw with Saint Etienne and kept the dream alive that they’ll play in the final in their own stadium.

The Swiss league leaders made it through to this stage having topped their Europa League group ahead of Fiorentina.

The La Liga side currently sit in 4th position in Spain and are through to the next round of the Europa League after an impressive 2-1 victory against Napoli. They finished 2nd in their group behind Rapid Wien.

The Belgians beat Olimpiakos in extra time to progress to the round of 16. They’re currently 3rd in the Belgian League, 7 points behind league leaders Club Brugge. The finished second behind Spurs in and one place ahead of Monaco in their Europa League group.

The Portuguese side are through to the round of 16 after defeating FC Sion 4-3 on aggregate. They topped a Europa League group containing Marseille and currently sit in 4th position in Portugal.