With the dangers of Manchester City’s attack and the energy needed in Liverpool’s midfield, who starts in midfield on Sunday will play a pivotal part in Liverpool’s fortunes.

Emre Can is expected to appear in the middle, but calls for Lucas Leiva’s inclusion have increased, with former Red, Neil Mellor, saying the Brazilian should get the nod ahead of Can.

Lucas played at centre-back against Augsburg on Thursday and has gotten a lot of game time recently because of defensive injuries, but with Dejan Lovren expected to return from illness, Lucas’ place is under threat.

Can’s energy and quality have made him a vital cog in Jurgen Klopp’s side, so here we look at the case for each player. 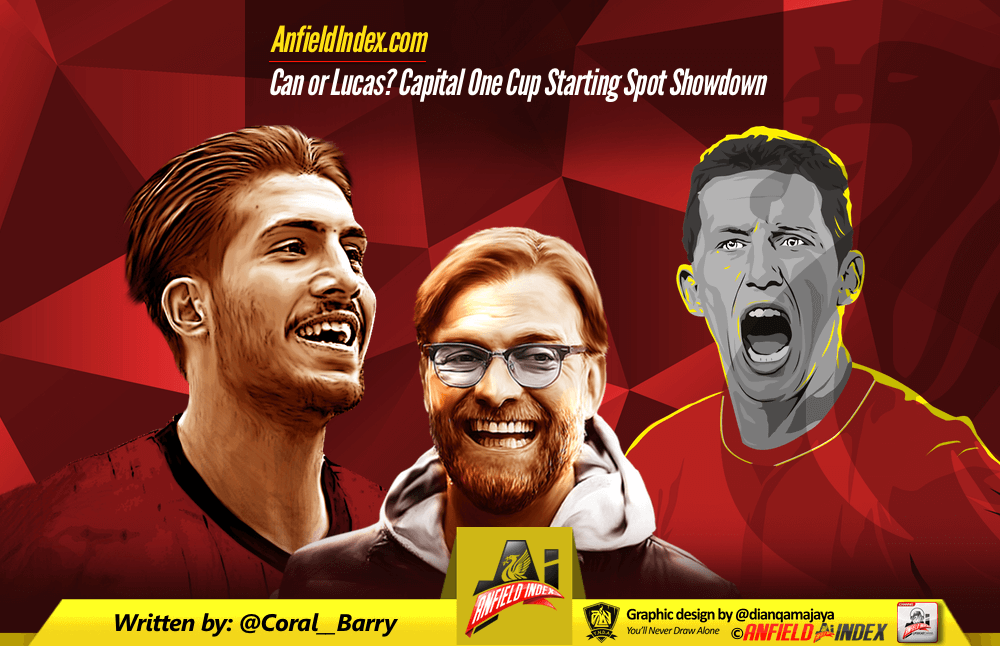 Although still only 22, Can has established himself as one of the most popular players on Merseyside and had been one of Liverpool’s most consistent performers, until recently.

The combative midfielder has been ever present this season, under previous manager Brendan Rodgers and now Klopp, missing just one league game so far.

Perhaps it is the fact that Can and Klopp share a language, but the two Germans seem to understand one another. During Jordan Henderson’s absence, Can was at the forefront of trying to get Klopp’s message across on the pitch.

Can has won just over half of his 109 tackles and 70 headed-duels in the league, but it is upfront where the midfielder has failed to kick on this season.

With two goals and just one assist to his name this campaign, Can has not yet blossomed into the midfield powerhouse Liverpool fans are still hoping he will become.

On Sunday he would surely be tasked with breaking up City’s play as well as contributing to Liverpool’s attacks. Klopp would like him to play those two roles equally, but inevitably the German will be pulled in one direction and too often opposition have exposed gaps between Liverpool’s midfield and back four.

He started in the Augsburg’s win, but was virtually anonymous during the game. His form has dropped off considerably in the last few weeks, perhaps due to tiredness, but Klopp will need the Rolls Royce on Sunday and not the Ford Fiesta, that he has become recently.

The 29-year-old must be the most resurgent Liverpool player in history. Time and time again the Brazilian has come back from the brink, forcing his way back into the plans of the numerous Merseyside managers that have written him off.

Injuries across the back four have meant the defensive midfielder has played as a centre-back for the first time in his career, but the times in which he looks comfortable have been interrupted by moments of real naivety.

He helped Liverpool to a nervy victory on Thursday night, but his questionable backpass that almost put Liverpool behind shows exactly how out of his depth Lucas can be in the heart of defence.

Alongside the almost game-defining mistake, Lucas made four interceptions and ten clearances and committed just one foul. But let’s face it, Augsburg are no Sergio Aguero.

He will surely be introduced back into his favorite position against City and act as a reliable shield between front and back, something he has always done very well.

Who to go for?

The question for Klopp is: does he want a player that will do one thing well or does he want someone who might be able to spread himself over attack and defence?

Lucas will execute his orders admirably, but that is really all he will do. He will not hit a worldy or produce a defence splitting pass out of nowhere, Can has that capability.

However with Roberto Firmino, Daniel Sturridge and Philippe Coutinho upfront, Liverpool do not need another player to find a pass, they need some steel. Against David Silva and Yaya Toure, the Reds are surely crying out for someone to sit and disrupt. That is Lucas’ game.

Can was part of the team that was quite shamelessly brushed aside by Aston Villa in last year’s FA Cup semi-final and Liverpool were certainly lacking grit in that game.

Lucas also has the benefit of experience over the still relatively young Can and as an old head he should be able to inspire a bit of calm in the side.

However what was behind Liverpool’s 4-1 demolition of City in November? Energy, potency and relentless pressing. Can and Lucas both started that game. Even James Milner made it into that line-up and with Adam Lallana sidelined, Sturridge can take his front three place.

So perhaps Klopp has it in his mind to begin with the two midfielders and try and play a similar game to the one that so crushed City before?

Whatever the decision, it is not long now.

Who would you go for? Is there room for them both or do Liverpool need to priortise attack over defence?