As dominating a performance as one could hope for as Liverpool scored two goals without a response in what could be termed as a one-sided first leg. Liverpool absolutely bossed the game from start to finish and carry a satisfactory two goal advantage into the return leg. A clean sheet is a big boost going into the away leg. 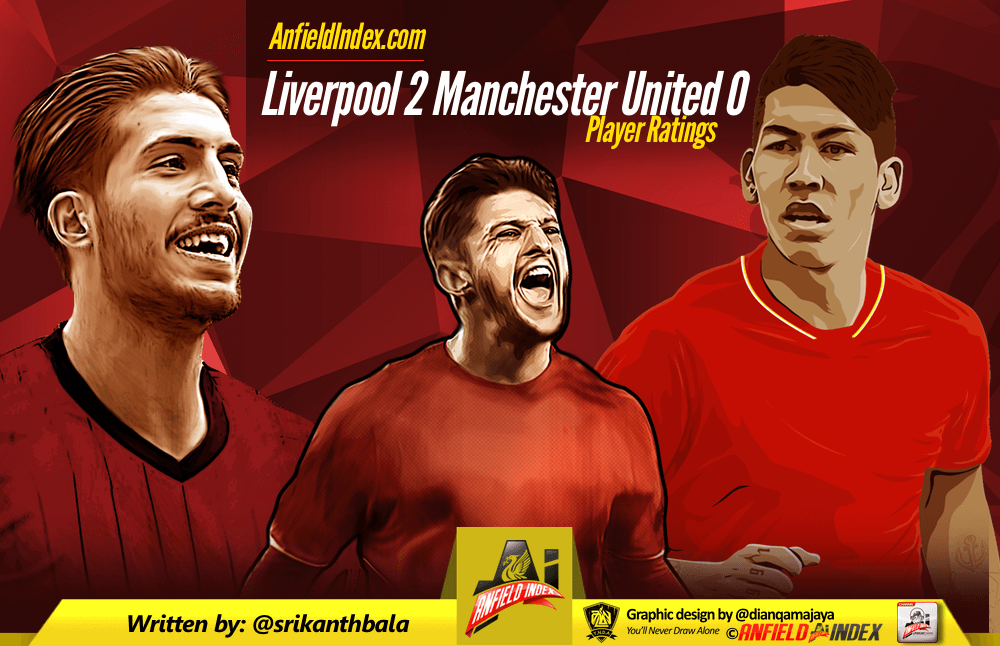 This is how the Reds fared tonight:

Nathaniel Clyne (7) – Was closed down in the very early parts of the first-half, often leaving him with no passing options. A typical in-field run from Clyne from the by-lines resulted in Liverpool winning the penalty. Otherwise was solid in the first-half. Started the second-half with a series of positional errors in quick succession as he struggled with the tactical change from United meaning that Blind was free more often than not. The introduction of Allen helped and he began to recover and ended the game with a solid performance.

Dejan Lovren (7.5) – A no-nonsense first-half from Dejan Lovren where most of his touches were hoofs or headers to the by-lines which is what he should stick to doing. The second-half was pretty much the same as he dominated aerial duels and his first response was always to clear the ball than attempt any fancy touches. An encouraging performance.

Mamadou Sakho (7) – Must have seen more of the ball than anyone on the field in that first half. Manchester United preferred not to press high thus allowing Sakho to advance with the ball. Most times he found his man in the mid-field. Had one or two heart-in-the-mouth moments, but otherwise had a good half. Had a very good second half which had the usual couple of nervy moments as Liverpool recovered from the early pressure on them from United in the second half.

Alberto Moreno (7) – Had a tough first fifteen minutes but grew into the game. Stayed very high as usual and used his pace very well in attack and while recovering in defence. Linked up well in the midfield as he often cut in to narrow the pitch and allowing the midfielders to overlap.

Emre Can (8) – A towering presence in the centre of the park, he dropped deep to perform the re-cycler role as Liverpool had the lion’s share of possession. Was very quick to nip out any potential counter attacks from United on the rare occasions when they had the ball. Bossed the midfield as he was always available to receive scuffed passes or in recovering the second ball from half challenges. Was calm on the ball and found his man to setup attacks. A leader in the making.

Jordan Henderson (7.5) – The captain seemed up for the occasion, as an early tackle reminded the players of the occasion. The booking resulting from that tackle meant that he needed to be cautious through out the game. His long diagonal passing seemed to be back after a hiatus, and so were the late runs to the far post. Henderson continued his high tempo and relentless harrying in the second-half, but could have done better with the chance he was presented with. An encouraging performance after a series of below-average performances.

Roberto Firmino (8) – Solid first-half for Firmino, on the back of a poor performance vs Crystal Palace. The ease at which he got past his man with a shimmy or a dribble was a sight to behold. Was closed down almost always but exhibited excellent ball control in tight spaces and created an excellent chance for Lallana late in the first-half. His relentless pressure was rewarded in the second-half with a finely taken finish which could be the goal that seals the tie. Was taken off late in the second-half once it was clear the first leg was settled.

Philippe Coutinho (7.5) – Coutinho had a very good first-half, but by his own admission, he could have done better for his attempt on goal and could have sealed the first leg. His ability to dummy when closed down was very pleasing and was involved in the game through-out that first-half. The second-half was not much different as he was on the ball often to set up attacks. Had a great volley which was turned away by an irritatingly good De Gea.

Adam Lallana (8) – Lots of hard running and pressing off the ball, but since Liverpool had so much of the ball, he seemed to drift in and out of the game. Had a good attempt from close range, which he shot straight at De Gea. The tactical switch to a back three immensely benefited Lallana as it opened up spaces in the wide areas for Lallana to exploit. There were couple of the usual turns and flicks which were used to great effect. Set up the Firmino goal. Best player on the pitch in that second-half.

Daniel Sturridge (7) – Sturridge had a slow start to the game, often making runs in the wrong channels. Took a good penalty to put Liverpool ahead, and so did his game improve. Had a couple of other attempts in that first-half. He was often prepared to go wide to receive the ball in the channels and turn the defender inside out. Was withdrawn on sixty minutes.

Joe Allen (7.5) – Joe Allen was brought on to stem the flow of attacks in the second-half from United, and Allen did what Allen usually does. Stymied their attacks, won the ball and gave the ball. Played a far advanced role which has become common under Klopp. Commendable that Allen has delivered on every occasion that Klopp has brought him on. If only he could remain fit.

Divock Origi (7) – Was brought on with a clear plan of exploiting Carrick’s lack of pace, and the plan was more or less successful as Carrick struggled to cope with his power and pace and had to put out the ball a few times to save his team from further blushes. An immensely likable cameo.