Christian Benteke came off the bench yesterday and proved to be Liverpool’s hero after he converted a last minute penalty to give Liverpool all three points at Selhurst Park.

Liverpool played their third game in a week on Sunday against Crystal Palace at Selhurst Park. With Palace being somewhat of a bogey team for Liverpool of late, when Joe Ledley put his team one nil up after forty-eight minutes, Liverpool fans feared the worst, especially when after sixty-two minutes James Milner was sent off for a second bookable offence (Milner’s red card was only the second red card this season for Liverpool, Philippe Coutinho was the first in August against West Ham United). Liverpool manager Jürgen Klopp made a number of changes from the team that beat Manchester City last Wednesday night, as in came Mamadou Sakho, Alberto Moreno and Divock Origi. The inclusion of Moreno at left-back was somewhat of a surprise for fans especially after how well Nathaniel Clyne performed at left-back in midweek. 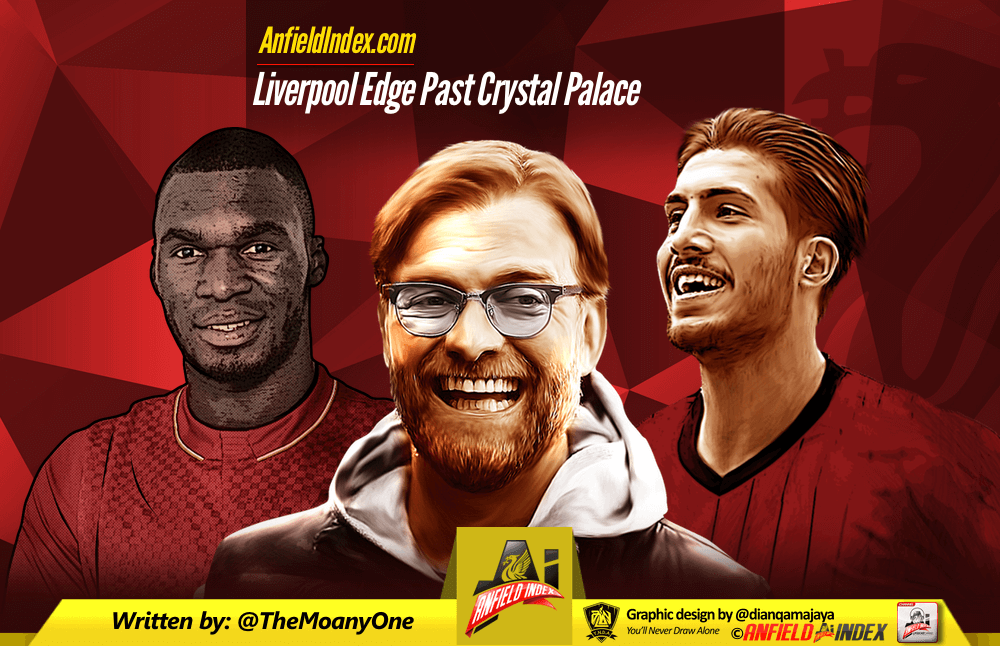 Crystal Palace have not won in their last eleven outings and manager Alan Pardew was hopeful that his team could end that run against Liverpool, a team they have had some great results against in the last couple of seasons. Pardew will feel hard done by when he looks back at the awarding of the last minute penalty against his team, because Liverpool were very fortunate to win it. On any other day it would never have been awarded.

It was Palace who started the better of the two teams and could have been two nil up early in the first half. Emmanuel Adebayer was a constant thorn in the Liverpool defence and it was his pass to Yannick Bolaise in the seventh minute that forced the first save from Simon Mignolet. Adebayer saw his header come back off the bar four minutes later as he met a glorious cross from Pape Souare. Next up for Palace was French International Yohann Cayabe but his shot only found the side netting much to the relief of the travelling Kop. Such was Palace’s domination in the first half, Liverpool failed to have a decent shot on target.

The second half started off the way the first half ended with Palace doing all the attacking. Their persistence paid off when three minutes after the restart Joe Ledley scored the opening goal (his first in 33 appearances) after a misplaced clearance from Roberto Firmino. On sixty-two minutes James Milner was given his marching orders after he was sent off for a second bookable offence after a silly foul on Palace winger Wilfred Zaha. The sending off galvanised the Liverpool team and ten minutes after the red card, Roberto Firmino collected a poor clearance from goalkeeper Alex McCarthy and scored his seventh goal since January. This goal spurred the Liverpool attack on and even though Liverpool pushed and pushed to find the winner the closest they came to it was a strike by Alberto Moreno late on that came back off the post.

As the game petered to a close Christian Benteke was fouled in the box by Crystal Palace centre-back Damien Delaney; referee Andre Marriner saw nothing wrong with the coming together between Benteke and Delaney but changed his mind after he consulted with his linesman and awarded Liverpool a penalty. It was left for Benteke to take and he made sure of scoring with a cool calm and collected penalty. The win moves Liverpool up to seventh in the league and are still in with a chance of Champions League qualification for next season. As for Crystal Palace, they’re still searching for their first win of 2016, they currently sit fifteenth in the league and are nine points above the relegation zone. The win against Palace was Liverpool’s first ever win in the Premier League after going behind and having a man sent off.

Liverpool’s best player against Palace for me was Emre Can. It seems the more he plays these days the better his game is and this is solely down to Jürgen Klopp and his training regime. Klopp has gotten the very best out of him over the past number or weeks. With places up for grabs in the German national team for next summers European Championships, Can is surely a guarantee if he can keep his current level of performances he is a shoe in Joachim Löw’s squad.