Liverpool travel to Germany to face Borussia Dortmund on Thursday night in the first leg of the quarter finals of the Europa League.

Thursday’s game promises to be quite the spectacle with a return to Germany for Jurgen Klopp making all the headlines in the build up to the crucial tie. Both sides will be looking to take an early advantage over the two legs and enhance their chances of progressing into the semi final and getting the sought after trophy. 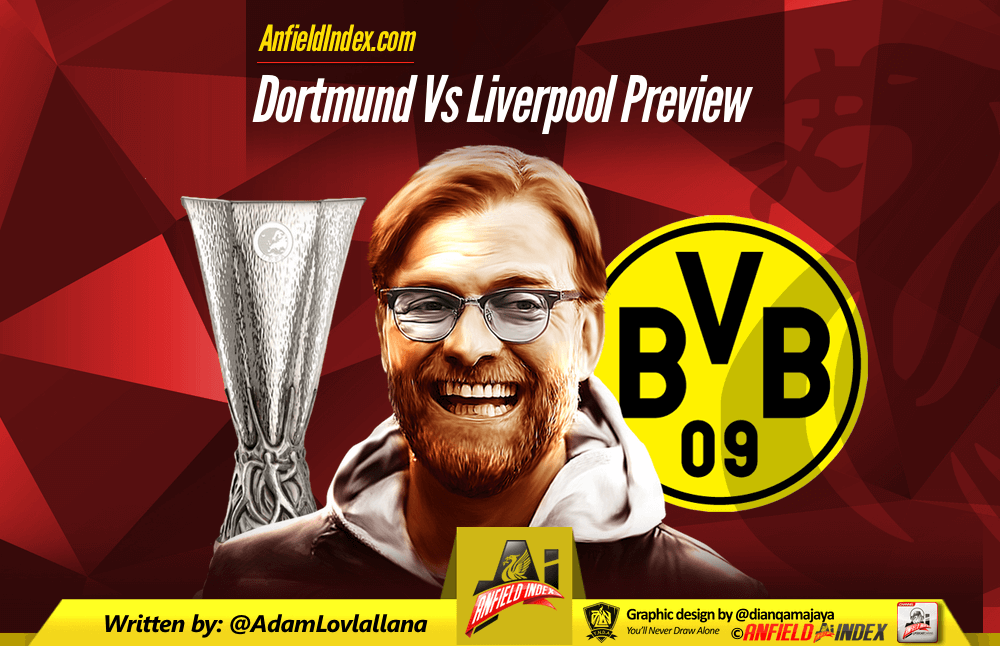 Liverpool have progressed well under Jurgen Klopp throughout his time with the Reds, playing a more expressive and expansive style of football, allowing the likes of Philippe Coutinho and Roberto Firmino to flourish in the side. Furthermore, the policy of gegenpressing has resulted in Liverpool harrying their opposition into mistakes and indicates how Klopp has instilled a new belief and confidence within the side, something that looked all but gone in the final games of Brendan Rodgers’ tenure.

Liverpool currently lie in 9th place with 45 points from 30 games. The Reds find themselves nine points adrift of the all important Champions League places that could be crucial towards luring quality players in during the summer. While they have a game in hand, it seems highly unlikely that Liverpool will be able to make up the ground needed on Manchester City and Manchester United to sneak into the top four and subsequently gain Champions League football.

In their last match, Liverpool drew 1-1 with Tottenham at home in what was a close encounter between the two sides who fought neck and neck for the three points. Spurs have had a terrific season and seem the team most likely to get the title if Leicester are to crumble in the final weeks but Klopp’s side dealt with them well at the weekend, dominating midfield to silence the ever illusive Dele Alli who has played a key part in Pochettino’s success this season. The Reds took the lead through Philippe Coutinho, who brought his tally up to double figures for the season. The Brazilian played some intricate one touch football with Daniel Sturridge to wriggle free of the Spurs defence and the one-two left him through on goal, where he side footed cooly past the onrushing Hugo Lloris. However, Harry Kane was able to restore some order for Tottenham after scoring a superb goal late in the second half to salvage a point for his side. The England forward cleverly spun Dejan Lovren, before guiding the ball expertly into the right hand corner of Mignolet’s goal. All in all, it was a fair result given the closeness of Saturday’s match and Klopp will be pleased with some of the intricate play he saw from his side as well as very diligent defending from Dejan Lovren. However, the performance of Daniel Sturridge would have been slightly troubling for the German, with the striker registering possibly his worst game for Liverpool since joining. Sturridge failed to get involved with the game and showed little desire to close down the ball and apply pressure to help his teammates. The arrival of Divock Origi significantly lifted the attacking threat of the Reds and thus the Belgian may find himself in the starting line up on Thursday night instead of Sturridge.

Due to their erratic league performances throughout the season,  there is huge importance on the Europa League for Liverpool, with it offering the greatest, and arguably only chance, of Champions League football next season. Thus, Klopp will be adamant that his side produce their very best on Thursday night and give themselves a fighting chance for the second tie which will be played at Anfield. However, it promises to be quite a challenge for Klopp’s men given the form of Thursday’s opponents, who have thrived this season under new management.

Borussia Dortmund will head in to Thursday’s game high on confidence given their current form and there is no doubting their attacking prowess, which could cause Liverpool a whole host of problems.  Pier Emerick Aubameyang has been a nightmare for teams all season and his pace and trickery mean he’s always a handful for opposition defenders along with Marco Reus and a number of other high profile names. It’s clear to see that since taking over at Dortmund, Thomas Tuchel has returned the club to the top, as they lie five points off Bayern Munich with six games left to play.

Dortmund go into the game clear favourites to progress to the semi final of the competition and many have tipped them to be the eventual winners. They are on a five game winning streak in all competitions while Liverpool have lost one of their last five, winning three and drawing two. Furthermore, Dortmund are unbeaten in their last nine home games in all competitions, winning eight and drawing one. However, Tuchel has beaten Jurgen Klopp just once in their 10 meetings, losing seven of Mainz and Dortmund’s meetings between 2009 and 2014.

Liverpool are unbeaten this season in the Europa League with four wins, but have drawn six of their ten games so far. The Reds have scored 10 goals and let in just five, keeping a clean sheet in four of their last five matches.

Dortmund have won 11 of their 14 matches in the Europa League including the qualification round, with a draw and two defeats in the group stages. They are on a four match unbeaten run in the competition and have scored eight goals and conceded just one in the process.

The teams have met on three occasions in the European competitions and have a win and a draw each to their name. In the 1966 European Cup Winners’ Cup Final, Liverpool lost 2-1 in extra time to Dortmund under Bill Shankly. The teams were drawn in the same group in the 2001/02 season of the Champions League and drew 0-0 in the first leg.

Borrusia Dortmund may be without Ikay Gundogan who is still recovering from injury while Sokratis and Hummels are expected to be back in the starting lineup.   For Liverpool, the Reds could be without Roberto Firmino once again after the Brazilian has reportedly damaged his ankle and thus may miss the crucial tie on Thursday. Daniel Sturridge is likely to play a part despite a disappointing performance at the weekend while Benteke continues to recovery from injury. Lucas, Ings, Gomez and Rossiter remain out with long term injuries.

Simon Mignolet will retain his place in goal for Liverpool while the back four is likely to remain unchanged from how it was at the weekend. Dejan Lovren will be hoping to put in another impressive performance for his side but will need to work hard to silence the threat of Aubameyang and Reus. Mamadou Sakho had a few wobbly moments against Spurs but is still the preferred choice at the back and could play an important role.

In midfield, Jordan Henderson displayed good energy on Saturday to deal with Dele Alli and his role could be pivotal to the outcome of the tie. The England midfielder will partner Emre Can, who has had a hugely impressive season under the leadership of Jurgen Klopp. Going forward, I would expect things to remain very similar to as they were against Tottenham, unless Firmino is passed fit for selection, in which case I would bring him in for Milner. Daniel Sturridge should remain as the central striker but will need to produce a performance much better than the one against Spurs if he wants to play a role in the second leg. However, the inclusion of Divock Origi wouldn’t be at all surprising given how he lifted the attack on Saturday.