Liverpool welcome Stoke City to Anfield on Sunday afternoon, hoping to gain three points to close the gap on the top four. A win would push them above Stoke in the table, and could see them rise to 7th.

Jurgen Klopp faced his old club on Thursday night as Liverpool came away with a 1-1 draw against Borussia Dortmund in the first leg of the Europa League quarter finals. The result will be seen as a positive one for the Reds rather than for Dortmund, despite the German side remaining favourites to progress to the semi-finals of the competition. As many expected, the home side dominated the lion’s share of possession with Liverpool sitting back and containing the pressure to ensure that they didn’t fall behind early on. 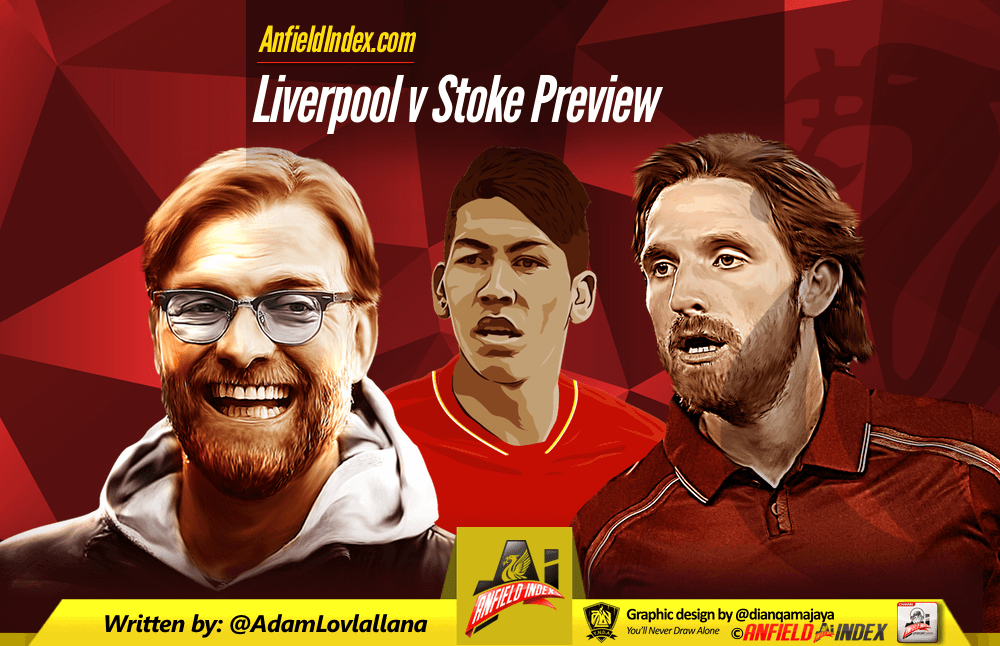 The defensive pairing of Dejan Lovren and Mamadou Sakho was outstanding in midweek, with both players making key tackles and interceptions to keep Liverpool level in the first half an hour. In fact, the Croatian dealt well with Pierre Emerick Aubameyang all night, with the striker having a fairly quiet game for Dortmund.

Prior to the match, the majority of the discussion surrounded the selection dilemma of whether Liverpool would start with Daniel Sturridge, who registered a rather lazy performance at the weekend. Divock Origi came on against Tottenham and offered a real bright spark going forward with his energy and tracking down setting a tone for the rest of the side, and it was the young Belgian would got the nod to start against the yellow wall.

The decision certainly paid off for Jurgen Klopp and Liverpool when Origi put his side ahead in the first half, controlling Jordan Henderson’s through ball well before turning towards goal and steering the ball into the far corner.

However, the home side did get their equaliser early on in the second half when Mats Hummels headed in from a pin-point cross to deny Liverpool the win. Liverpool were once again suspect to some poor set piece defending as Hummels was marked by Adam Lallana, somewhat of a mismatch, gifting the defender a chance to level the scoring.

Unfortunately, this has been the thorn in Liverpool’s side all season and something that desperately needs to be worked on ahead of next season. In the end it was a good result for Liverpool and the crucial away goal will give them a big lift heading into the second leg at Anfield.

Liverpool’s record in league games following European fixtures this season doesn’t make for good reading, with the Reds winning only one Premier League match (D4 L2). In addition, they have won only three of ten league games at Anfield under Jurgen Klopp and thus Stoke City, who have impressed this season, will fancy their chances on Sunday afternoon especially with Liverpool’s excursions set to take a toll on their players.

Nonetheless, Liverpool have scored 16 goals in their last six league games and the return of Roberto Firmino won’t be a welcome sight to Mark Hughes, with the Brazilian in scintillating form of late. Games involved Liverpool have produced a league-high of 43 goals in 2016 and given that Liverpool’s attack can be so elusive when Philippe Coutinho is on the ball with Daniel Sturridge ahead of him, the Reds may very well find themselves in among the goals once more.

Stoke City currently lie one place above Liverpool in 8th, with a total of 47 points from 32 games. Mark Hughes’ side have been in impressive form of late, losing just one of their last seven league games (W4 D2) and thus will head to Anfield in high spirits, hopeful of gaining another three points to increase their chances of achieving European football for next season. Marko Arnautovic will be crucial if Stoke are to get something out of the game, with the forward being involved in 15 goals for the Potters, 10 goals and five assists.

Stoke are unbeaten in three away games in the Premier League (W2 D1) after losing each of their three away league games before that. They have netted a joint league high of eight goals in the first 15 minutes of their games this season – level with Manchester City and Bournemouth) and thus Liverpool will need to be switched on right from the first whistle in order to ensure they don’t fall behind early on.

However, Stoke have kept just one clean sheet in their last 10 league games and with Daniel Sturridge likely to start given his brief appearance in midweek, the Potters could face a trio of Firmino, Sturridge and Coutinho – that’s not exactly what you want to see when you’ve had such a bad defensive record of late. Therefore, Mark Hughes’ men will need to remain switched on to close down all the gaps to prevent Liverpool from playing their free flowing football.

In his pre-match press conference Mark Hughes stated that “I think the last time we won there in the league the game was moved because of the Grand National. So maybe that is a good omen for us! There’s only been a single goal in every game we have played against them this season, and last time we played exceptionally well, we deserved to win the game. We have cracked the ceiling somewhat with that result.”

Stoke have won just three times at Anfield in 60 league attempts, none of them have come in the top flight. The Potters’ last league win at Liverpool was in 1959 and since then Liverpool have won 26 of the 30 matches played, with the other four being draws. However, Stoke did win 1-0 at Anfield in the second leg of the League Cup semi-final earlier this year. The last four Premier League games between the side have produced 17 goals, average roughly 4.25 goals per game.

Liverpool will be without Jordan Henderson on Sunday after the captain has been ruled out for six to eight weeks with a knee injury, making him a doubt for Euro 2016. Emre Can is also not available, with the German serving a suspension after receiving a yellow card against Borussia Dortmund in midweek.

Therefore, Liverpool could hand starts to Joe Allen and Lucas Leiva, who has returned following a spell on the sidelines. Alternatively, James Milner could drop back into the middle to allow Jordon Ibe or Sheyi Ojo a game.

Daniel Sturridge is pushing for a start up front after being named on the bench against Borussia Dortmund while Roberto Firmino is also available after making a brief appearance in midweek. However, Divock Origi could keep his place in the side given his performance in the Europa League.

Stoke will be boosted by the availability of Ryan Shawcross and Xherdan Shaqiri who return following back and thigh injuries respectively. However, Glenn Whelan and Marko Arnautovic are both doubts for the game, and with the later in such good form, it would be a major blow for Mark Hughes not to have him available.

Whelan suffered a back problem getting out of his car with Arnautovic picked up a knee injury in Stoke’s 2-2 draw with Swansea last weekend. Jakob Haugaard is set to remain in the starting lineup after making his Premier League debut.

I expect Simon Mignolet to continue in between the sticks against Stoke, with the Belgian doing well in recent weeks. Despite playing the full ninety minutes in midweek, Dejan Lovren and Mamadou Sakho should retain their places in the side with the duo impressing against Dortmund.  The centre back pairing have developed a really good partnership in recent weeks and made a number of key interceptions to keep the Reds in the game, thus changes could be counter-productive.

With Henderson and Emre Can both out of the game, Joe Allen will almost certainly start. The Welshman made an appearance off the bench against Dortmund and spread the ball well to get Liverpool ticking over in midfield.  Kevin Stewart has recently returned from injury and could feature on the bench for the Reds but I think it is more likely that James Milner will take up a more defensive position in the middle of the park.

It wouldn’t surprise me if Philippe Coutinho got a rest on Sunday with Roberto Firmino coming into the side to replace him. Adam Lallana and Sheyi Ojo could adopt the wide positions, with the youngster adding some pace and trickery in to the side after impressing for the U21s.

Ojo is certainly ready for the step up in to the first team and there seems no better time than now for Jurgen Klopp to give the youngster a chance to show what he is capable of. Daniel Sturridge didn’t get the nod against Dortmund but I suspect he will be the chosen one against Stoke, with Origi adopting a place on the bench despite a terrific performance in midweek.