There’s a perpetual cycle of bickering when it comes to Liverpool fans on social media that doesn’t seem to be nearing an end anytime soon. Some may call it Groundhog Day, others may call it deja-vu. One thing that’s for sure is Liverpool fans like to reignite the same arguments almost as though there’s a rota they have to stick to.

Off the back of the Daniel Sturridge debate. I’m sure you’re all familiar with it by now – some fans would sell him whereas others think the idea is ridiculous. You know, the same debate that was had about four months ago? Well moving on from that it’s become evident that we as fans are heading into YouTube season, in which fans with any knowledge of players outside of the Premier League are apparent liars and those with little to no knowledge are just sharing Youtube videos. 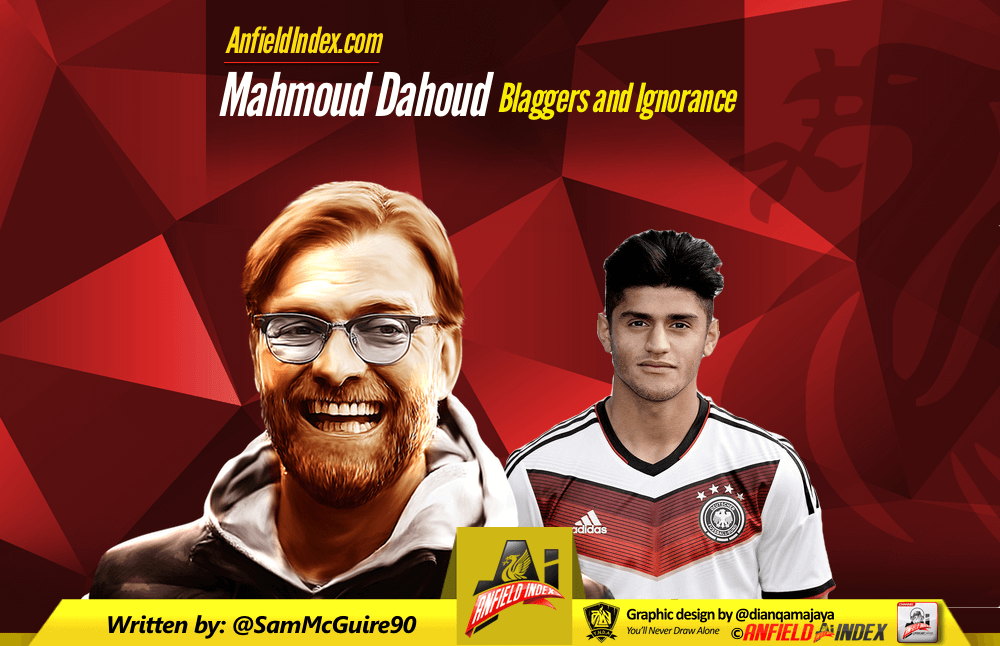 If this all sounds familiar it’s because Youtube season only came to an end when the January transfer window finished. Usually there’s a bit more of a gap but with the news that Liverpool are going all in for Gladbach midfielder Mahmoud Dahoud it’s come around again sooner than expected.

A transfer rumour is published and within minutes there are highlight videos on Twitter and Facebook, and it was no different on Monday night.

I use the term highlight loosely in this instance. More often than not these videos are literally snippets of the player that the video editor could find, and were legally able to use. Underneath these videos you see people leaving comments like “He’s shit, why not sign Gundogan” or “OMG Liverpool need to sign him”. Really? You’ve come to that conclusion having watched a six minute highlight video of a player?

These highlight videos were originally done so people could showcase the strengths of a player for those that were unfamiliar with him. Scouting software such as Wyscout, a system Premier League clubs use, has similar videos. It states a player may contribute to counter attacks and then it provides three or four videos of this for an example. Like with everything else money was introduced into the equation and less effort went into these videos. There are only a select few on Youtube these days that go to the trouble of piecing together a real highlights video of a player.

It’s becoming increasingly more difficult to trust people when it comes to seeking out accounts online who have proper knowledge of these players linked to Liverpool. We live in the era where false Gods rule supreme, and Twitter is a difficult platform to navigate these days.

For whatever reason it’s seen as a sign of weakness to admit to not knowing about a player. Just because you have a large following on Twitter doesn’t automatically mean you should be an encyclopaedia of football knowledge. But these large accounts try to blag their way through all of the questions fired at them, giving people the wrong answers and then it spreads like wildfire. Take for Ousmane Dembele, linked with a summer move to Liverpool, his Wikipedia page used to say he scored a hat-trick on his debut. As you can imagine this was quoted by a few larger Liverpool Twitter accounts when the rumour first started despite it being factually incorrect.

Likewise the same thing has happened with Dahoud. Apparently he’s a deep lying midfielder similar to Xabi Alonso because a piece somebody has read said so.

You then also have Liverpool news accounts as well as newspapers publishing those “All you need to know about X player” pieces when in reality these pieces are just a beefed up Wikipedia pages with zero knowledge of the most important thing – what the player is actually like. I’m sure many readers would prefer to know about the common playing traits of a player as opposed to reading about how his mother used to own a bakery.

This is where the mistrust festers.

“If these newspapers, Liverpool fan sites and large Liverpool accounts don’t know about these players then why would this individual account? They must be lying for attention.”

If, God-forbid, you go against what’s been stated in a piece by the Liverpool Echo then you’re a liar because of course why would a journalist paid to write about Liverpool Football Club lie about a player in Germany they’ve never seen play before… oh wait.

Rory Smith of The Times recently emailed me about this exact scenario and to sum up what he said is basically journalists aren’t scouts, it’s not their job to know these players but if a player from a foreign league is really hitting the headlines then they’ll do their best to learn about him if they don’t already.

It’s a fair opinion. It’s not their fault that papers won’t pay for actual football writers to write about these players but at the same time they shouldn’t be putting out false information (not that they do so purposely) about a player, which then discredits somebody that’s spent time watching these players. Because in the social media world Twitter followers = knowledge.

Twitter is a car crash of rumours, misinformation and people desperately craving attention. The former two seep into the latter making it blurry and hard to distinguish where one starts and the other ends. Taking the damage isn’t the liars but those that do spend their time watching games from around Europe.

People are talking about Dahoud as though it’s near impossible to know what he’s like when if anything it’s easier to know what he’s like than it is to know what Eric Dier is like. Bundesliga football is readily accessible to British people, BT Sport show live games every Friday, Saturday and Sunday, sometimes even during the midweek. They show extended highlights of these games on repeat. Not to mention the fact Gladbach were in this year’s Champions League. There’s all this coverage of the Bundesliga or the occasional live Spurs game on Sky and whatever Match of the Day shows you.

You will get ignorant people who genuinely think the Premier League is the greatest league on earth and think every other league is inferior. Similarly you’ll get people reciting Wikipedia when asked about a player. This small percentage of fans from both camps shouldn’t impact on how you view others otherwise this debate won’t ever see an end. Let’s face it there are plenty of other things Liverpool fans can argue about.