Liverpool face Bournemouth at the weekend after the most dramatic of wins against Borussia Dortmund in the second leg of the Europa League to give them their place in the semi-final of the competition.

The Reds staged one of the most dramatic comebacks Anfield has ever seen on Thursday night when they overcame Borussia Dortmund to face Villarreal in the semis. Jurgen Klopp’s side were trailing 2-0 early in the first half, leaving them needing three goals to go through. Liverpool struggled to deal with the fast counter attacking nature of Dortmund’s play and it seemed like their Europa League journey was set to peter out after goals from Mkhitaryan and Aubameyang.

The latter was kept very quiet in the first leg but produced a top quality finish to slot the ball in the roof of the net, leaving Simon Mignolet no chance to make a crucial save like he did to initially deny Dortmund their first goal. The goals put the Bundesliga side 3-1 up on aggregate and thus all the pressure was on Liverpool.

Klopp’s side slowly grew into the game and created several chances, and finally got their reward for the sustained pressured when some brilliant one touch play from Emre Can slotted Divock Origi through on goal to give Liverpool hope early in the second half. The Belgian showed great composure to slot the ball through the legs of Roman Weidenfeller but the goal was snuffed out by Marco Reus’s curling finish into the right hand corner of the net as Dortmund countered the Reds again.

Liverpool still needed three goals with only 25 minutes left on the clock but were once again given hope when Philippe Coutinho’s low shot curved away from the German keeper to cut the deficit down. Mamadou Sakho headed in another after 77 minutes as the Reds took the game by the scruff of the neck and produced something quite remarkable.

With the ninety minutes up and the game heading into four minutes of stoppage time, it seemed like Liverpool were set to agonisingly miss out on the semi-final. Step up Dejan Lovren. The Croatian rose well to head home a terrific cross from James Milner in front of the Kop to spark delirium at Anfield. Lovren has been one of the most improved players since Klopp’s arrival and his stoppage time winner typifies how far he has come since his first abysmal season at the club. He has gone from zero to hero amongst Liverpool fans. 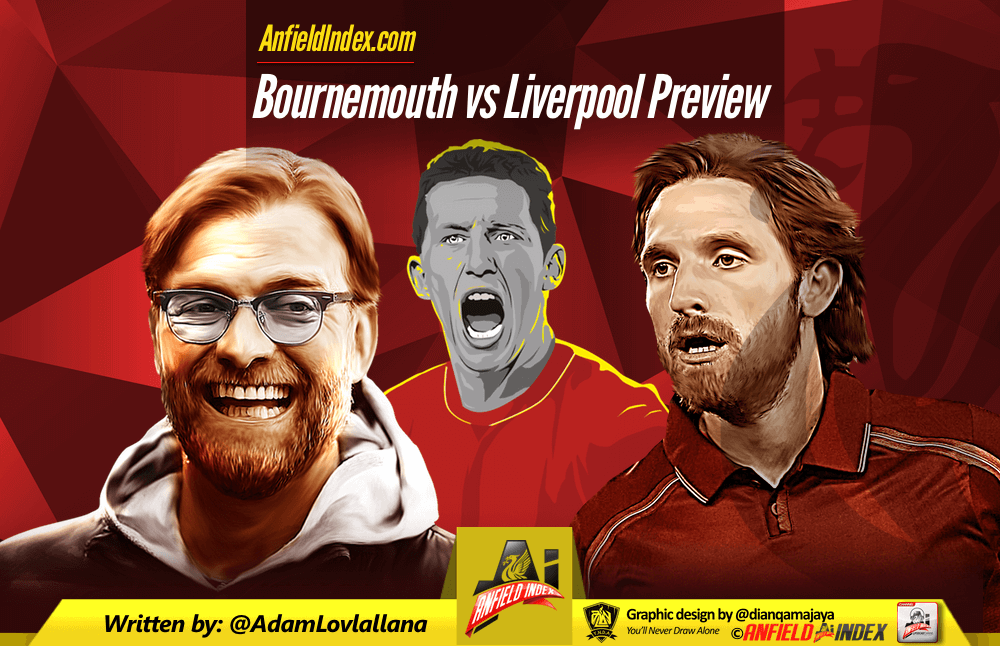 The Reds have suffered only one defeat in their last seven league games, scoring 20 goals in the process (W4 D2). Only the top three sides going into the weekend have a better away record than Liverpool (W7 D3 L6).  Therefore, Klopp’s side will head in to Sunday’s game high on confidence looking to improve their current Premier League position. While the top four looks a step too far for Liverpool, they will want to make use of the games in hand they have on the teams in front of them and continue their form.

Bournemouth lie in 13th place with 41 points from 33 games. The Cherries have won four of their last six games and therefore won’t be easily pushed aside by the Reds on Sunday if they aren’t at their best. However, they have lost four of their seven most recent home fixtures. Prior to the weekend, only three clubs had suffered more home defeats this season than Bournemouth who have a tally of seven. Only Everton and Villa have conceded more goals in  front of their own fans, and with the likes of Sturridge and Coutinho amongst the Liverpool ranks, you wouldn’t fancy the Cherries chances of keeping a clean sheet on Sunday.

Liverpool have never lost a competitive match against Bournemouth, winning six times and drawing twice. The Cherries have scored just four goals in those eight meetings and never more than once in a game. Liverpool have twice beaten Bournemouth 1-0 at Anfield this season, once in the league and again in the Capital One Cup.

Bournemouth may be boosted by the return of Junior Stanislas at the weekend. The winger has been on the sidelines with a hamstring injury but may play a part against the Reds on Sunday. However, Benik Afobe will be unavailable for the game due to hamstring worries while Harry Arter and Adam Smith will remain on the sidelines as they continue their recoveries.

Liverpool will ring the changes on Sunday after their European excursions. Injuries to Jordan Henderson and now Emre Can will mean that Joe Allen and Lucas Leiva are likely to start, however young Kevin Stewart could once again get the nod after his display against Stoke.

Christian Benteke remains a doubt with a minor injury meaning that Daniel Sturridge could make his four successive start in the Premier League in a single season for the first time in two years. Jordon Ibe has been out of favour recently but could get a chance to showcase his talents with others set for a rest.

Liverpool are likely to mix things up just like they did against Stoke City before their second leg tie with Borussia Dortmund on Thursday. Simon Mignolet will remain in goal while Kolo Toure and Martin Skrtel could once again be recalled to give the goal-scoring duo of Mamadou Sakho and Dejan Lovren a rest. I’d like to see Brad Smith get a run out to provide Moreno with a rest after the gruelling Europa League tie but Klopp may well stick with Moreno and Clyne to not disrupt the defence too much.

In midfield, I expect to see Joe Allen alongside Lucas Leiva while Sheyi Ojo could once again be deployed out wide after an impressive 45 minutes against Stoke last weekend, with Adam Lallana on the other wing. It wouldn’t surprise me to see Daniel Sturridge lead the line after another substitute performance against Dortmund. The English striker made a key difference in the match, contributing well to the impressive turnaround.