A day that started with a poignant tribute to the ninety-six from AFC Bournemouth, ended in joy for Liverpool as a hugely changed squad came out 2-1 winners on the south coast. Goals from Roberto Firmino and Daniel Sturridge put the Reds in cruise control, but Joshua King’s late goal ensured a jittery final few seconds for the Reds.

For Jurgen Klopp, the overriding emotion would be joy at the end of a tough week in which his team have won all three games they played in. 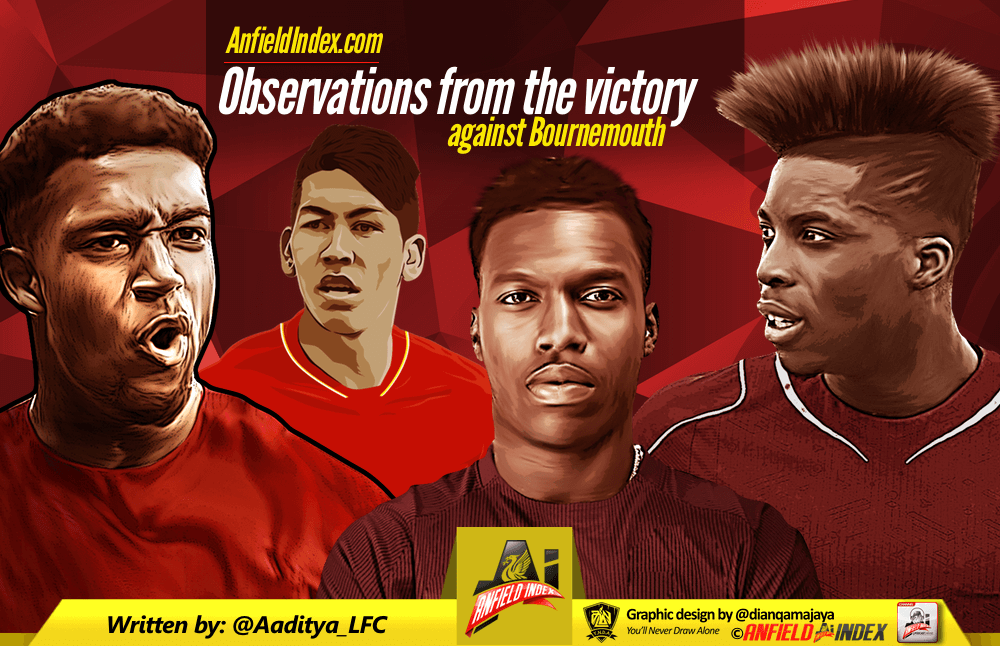 Here are some of my observations from the game.

Daniel Sturridge’s sharpness is coming back. This was his fourth consecutive league start – his best run since the end of the 2013-14 season. And since his latest comeback, this was his most encouraging performance. He tortured Tommy Elphick and Steve Cook all afternoon. The first goal we scored will be credited to Firmino but it was all Sturridge’s doing, with a brilliant cheeky back heel. He scored his goal with an awesome header and was unlucky to not add to his tally in the second-half, as the woodwork denied him twice.

Sheyi Ojo should start every league game till the end of the season. There is not much riding on our performances in the Premier League, and in all likelihood, Klopp will focus more on the Europa League as a means to get into next season’s Champions League. In that scenario, Ojo should play every league game remaining. He was nervous in the early parts against Stoke but came to life with the assist for Sturridge, and this afternoon he tormented Charlie Daniels as he put in another eye-catching display. It is a nice opportunity for Klopp to bed him into the first team scheme of things, heading into next season.

Lucas. A very disappointing performance from the Brazilian. He was run ragged by King all afternoon, as he just couldn’t keep up with the pace of the Cherries striker. Maybe he was left exposed by all the space that Brad Smith left behind, but one expected more from such an experienced player. With the midfield shaping up nicely, and his penchant for the daft, I cannot see Lucas staying at the club beyond the summer.

Danny Ward’s impressive debut. The young Welshman did get caught out on a couple of crosses, but it was a largely secure performance. He looked eager, didn’t hold on to the ball for longer than he had to, and made a couple of very good saves too. It wasn’t hard to understand why Aberdeen fans were disappointed to see him leave them in January.

Joe Allen continues to impress. He seems to be a man on a mission, and as of now, he is succeeding in that mission to win back the faith of the manager and the Liverpool fans. As always, he didn’t waste possession and kept the game flowing. He also made a number of very good tackles and interceptions. With Jordan Henderson and Emre Can maybe ruled out for the rest of the season, Allen is a very important player for us in this last month as we seek silverware.