Liverpool welcome Everton to Anfield on Wednesday night with Jurgen Klopp set for his first taste of the Merseyside Derby since taking over the reigns following Brendan Rodgers’ departure in October, with his last game a 1-1 draw with Wednesday’s opponents.

Liverpool currently lie in 9th place with 38 points from 26 games, putting them 3 points above Everton who lie 12th in the Premier League table. The Reds have lost just one of their last eight league matches and thus head in to the game high on confidence, hoping to make their games in hand count on the teams above. 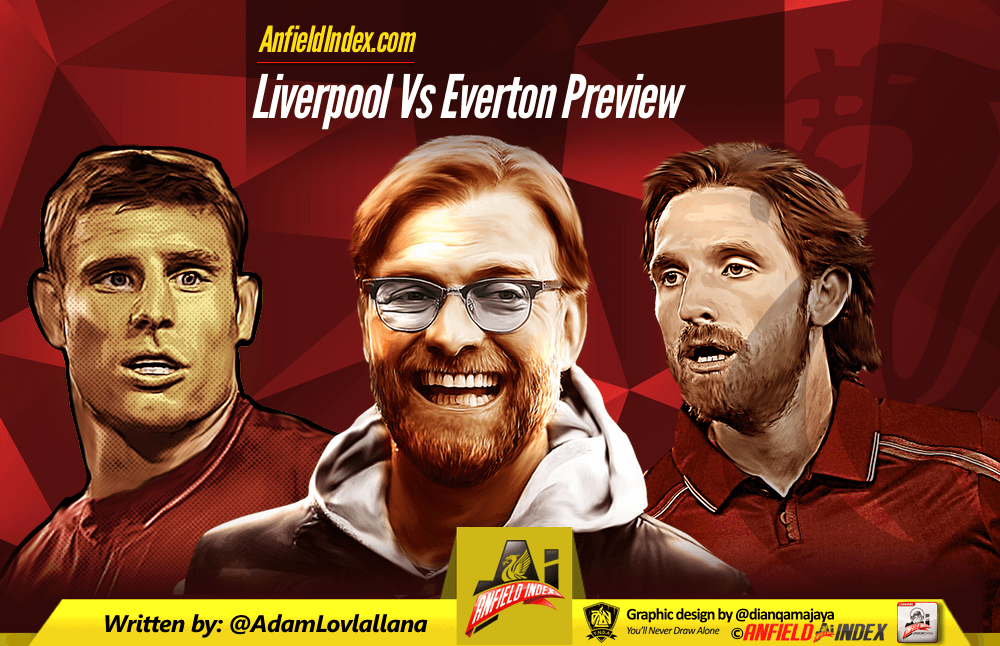 The red hot form of Roberto Firmino will no doubt impact the outcome of the match, with the Brazilian being involved in 12 goals in his last 11 league games (eight goals, four assists). Furthermore, Klopp’s side has been boosted by the increased sharpness of Daniel Sturridge, who caught the eye on several occasions against Bournemouth at the weekend. The England international has scored in four of his last five Premier League appearances.

At the weekend, a rather experimental Liverpool side won at Bournemouth to gain their third consecutive win in all competitions. The Reds were slow to get started following the ten changes made to the side following the excursions against Dortmund in the Europa League. However, they took the lead through Roberto Firmino after Daniel Sturridge’s impressive back heel was well saved by Boruc. The Brazilian was on hand to tuck in the rebound to give Liverpool the lead after a rather drab first half. Daniel Sturridge’s header doubled the visitors’ lead before half time, climbing well to direct the ball into the bottom left hand corner.

Bournemouth rallied in the final stages of the match with Joshua King scoring in stoppage time to bring the difference back to one goal. However, it was too little too late for the home side and the result increased the momentum of Klopp’s side following their impressive comeback in the Europa League. The young, inexperienced players repaid Klopp’s faith with a solid performance and Sheyi Ojo was the most eye catching, with a number of impressive moves adding some real flair and pace down the wings for the Reds.

In his pre-match press conference, Jurgen Klopp reflected that “Before I went to Dortmund there were lots of red cards in derbies. I don’t want to see this. Not to show ‘I am the man’. Maybe one or two fans want to see stuff like this, but it will never help. I understand aggressiveness only in one way, and that is being prepared to hurt yourself, not somebody else.”

Everton are without a win in their last six Premier League games, resulting in increasing pressure upon the shoulders of Roberto Martinez and his future at the club. The Blues have earned just 17 points at home this season in the league. They will end the season with their lowest tally at Goodison Park in the Premier League, with the previous ‘record’ 25 which was set in 1996-97.

However, they will still pose a danger to Liverpool on Wednesday, especially from set pieces. Everton have scored nine goals from corners in the league this season, putting them behind only Spurs and Palace who have scored a total of 10 goals. The aerial ability of Romelu Lukaku will undoubtedly threaten the Reds defence, who despite looking solid in recent weeks, face a tough task as suggested by the strikers record against the club. Lukaku has scored five goals in his last seven league appearances against Liverpool.

In his pre-match press conference, Roberto Martinez stated “When you compete in two tournaments, then weeks like this are, of course, defining. We embrace it and look forward. We are going to have our defining week in mid-April. Other teams have defining weeks in February when they are out of the FA Cup.

Everton have not beaten Liverpool in 10 league matches (D7 L3). That is their longest winless streak in this fixture sine an 11 game run between 1979 and 1984. Liverpool’s only defat in the 18 most recent Premier League meetings came at Goodison in October 2010 (W8 D9 L1). Everton have not been awarded a penalty against Liverpool since April 2003, when David Unsworth scored.

Liverpool could be without Kolo Toure who suffered a suspected hamstring injury against Bournemouth on Sunday. There are also reports suggesting that Divock Origi has sustained a back injury and therefore will be a doubt for the match. If so, that would be a key blow to Liverpool with the Belgian in tantalising form at present. Emre Can and Jordan Henderson remain sidelined and are not expected to feature for the remainder of the season.

Romelu Lukaku and Ross Barkley are set to be recalled after being named on the bench at the weekend to give them a rest ahead of the cruicial derby tie. James McCarthy will make a return from his ban while Seamus Coleman and Phil Jagielka are both out with hamstring injuries.

Despite a pleasing debut performance by Danny Ward against Bournemouth, I would expect to see Simon Mignolet return in goal for Liverpool given the nature of the occasion. Defensively, Liverpool will return to the four that played against Borussia Dortmund, meaning Moreno and Clyne will return to the side along with Lovren and Sakho who all received a rest on Sunday.

In midfield, Joe Allen has impressed since the injury of Jordan Henderson and I would expect the Welshman to retain his place in the side. James Milner could partner him to allow Adam Lallana, Philippe Coutinho and Roberto Firmino to supply the attacking nature to Liverpool’s play. Sturridge impressed against Bournemouth and with Origi’s suspected back problem, the Englishman could receive yet another start for the Reds as he continues to gain match sharpness following a lengthy lay off.