There cannot be too many better feelings than the one after Liverpool have just beaten Everton. Tonight, it was not just a win. It was a sound thrashing of an abject opposition as the Reds were rampant in taking home the bragging rights from the derby and some more. 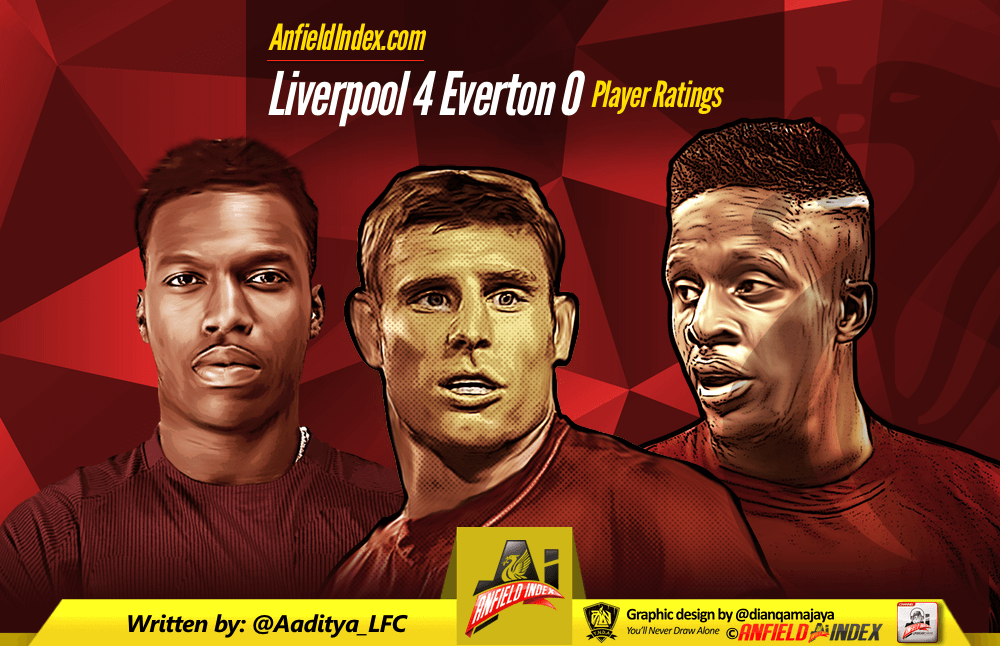 Here is how I thought each player fared.

Might as well have sat down on the Kop. That was how little he had to do.

Some terrific runs down the right side but lacked the end product. On another night, he might well have had a couple of goals.

He had his share of shaky moments today. Was caught out a couple of times in the first-half by Mirallas and Lukaku but luckily for him, nothing serious materialized as the Blues ended the night with zero shots on target.

There was another goal for the entire Liverpool country! He is slowly but surely becoming a cult hero at Anfield. Was a well taken goal, but you would have to ask questions about Everton’s defending.

Like Clyne, he spent almost the entire game in Everton’s half. A lack of composure let him down on quite a few occasions as he either over-hit his crosses or skewed his shots terribly.

I must admit when I saw the team sheet, I was not too happy about Lucas starting ahead of Joe Allen but it was a terrific performance from the Brazilian. He completely nullified Ross Barkley and even got himself an assist for Sturridge’s goal. My favourite moment of the match was his shot right at the end and the manic giggle that followed from Jurgen Klopp.

Not so boring anymore, eh? He now has fourteen assists this season, in addition to his seven goals. It was a proper workmanlike display again from Milner. It still baffles me how he cannot put one good corner in but crosses so well from open play.

He was everywhere on the pitch, but barely produced a moment of quality. He spurned a terrific opportunity early in the first-half that should have given us the lead. But this was one game where I did not mind all the pointless Cruyff turns.

A very quiet evening for the number eleven. He was sprightly and pressed very well, but like Lallana, the end product deserted him.

Just another day at work for our little magician. He gave Oviedo a torrid time all evening. He passed the ball brilliantly, brought other players into play and ultimately scored an excellent goal as a reward.

He was actually having a rather quiet game until he scored the opener for us. It was a brilliant leap and an immaculately placed header that did justice to a terrific cross from Milner. One can only hope that his injury is not too serious.

The sharpness that we saw at Bournemouth last weekend was once again evident as he looked bright, when put against Everton’s makeshift back four. As always, it was a very well taken goal.

Allen did what Allen has been doing in recent weeks – as he pressed effectively and used the ball really well. Finished the night with an assist as well.

Came on with around ten minutes to play. Had one moment of note when his left-footed shot stung the palms of Joel Robles.