It adds an extra element to occasion. Winning is incentive enough but bragging rights and pride being up for grabs just intensifies it. As a Liverpool fan whenever the fixtures are released at the start of the season I instinctively look for the matches against Manchester United and Everton. The feelings towards both clubs are completely different.

The United matches are fuelled by hatred and a tinge of jealousy. Jealous because of the success they’ve had since I started following football. Jealous at how they continuously managed to evolve and adapt to the new challenges they faced. My hatred for them stems from how large sections of their fan base act towards the Hillsborough tragedy. 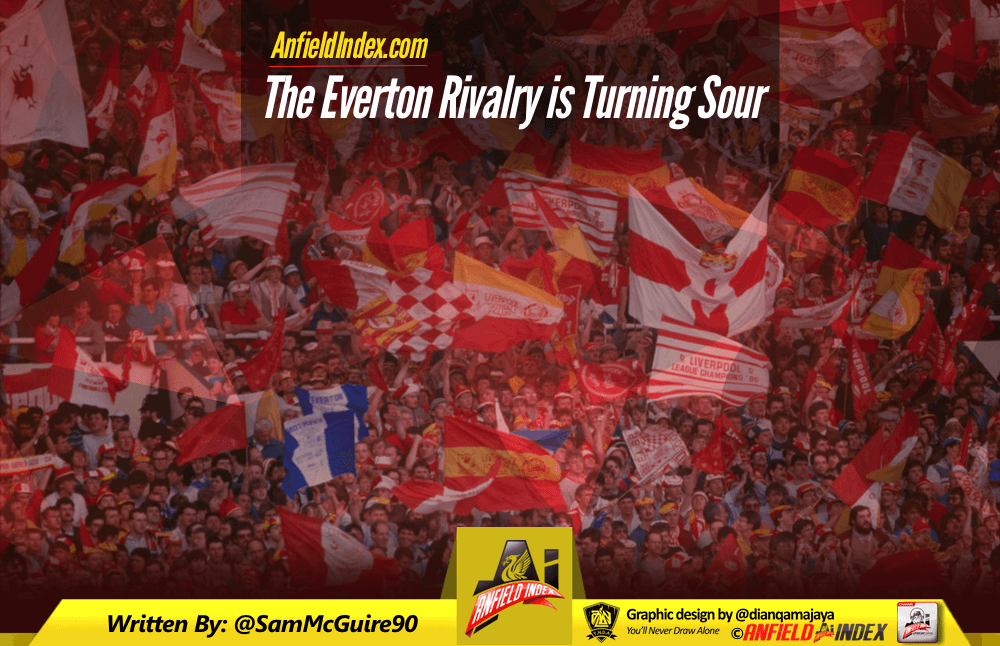 Both my Dad and Granddad said the rivalry between the clubs used to be respectful. You wanted to beat them every year because they were challengers. Now you want to embarrass them just to see them suffer.

The Everton rivalry was different. It was more of a sibling rivalry to begin with. About a third of my family are Everton fans so I’m used to the teasing and the one-upmanship involved with this game. I’m a 90’s kid so the matches I’ve witnessed usually end with me being smug and milking the victory even though I’ve kind of come to expect a victory when we face them.

Football is stressful and tense but when the Derby rolls around it lightens the mood. The over confident Evertonians set themselves up for a fall every single time. Their small club mentality makes it all so easy. The DVD’s when they finish above us. The printed t-shirts. The whole cheering a Manchester City goal at Goodison Park when you’ve still got a chance of finishing in a Champions League position. They openly admit a Liverpool loss is better than an Everton win.

This rivalry is beginning to get a little more strained.

After the Heysel disaster which ultimately saw English clubs banned from Europe the relationship took a hit. Everton fans took it personally, almost growing resentful at the idea what transpired was done solely so Everton couldn’t have success in Europe.

The Hillsborough incident seemed to mend bridges between the two sets of fans. The city was united. The respect between the two clubs has been evident since. Liverpool as a club offered their support in the Rhys Jones murder and played the Everton Z cars theme at Anfield. The whole ‘He ain’t heavy, he’s my brother’ song being played at Goodison when the two mascots walked out; one in a Liverpool kit and the other in an Everton kit with 9 and 6 on their backs in memory of the 96 that lost their lives was a spine-tingling experience.

Despite this show of solidarity from the clubs, it’s the fans that are letting Everton down. At recent derbies Everton fans have been going down the Manchester United fans’ route. Unsavoury chants. In Liverpool’s 4-0 victory you could clearly hear “murderers’ and ‘always the victim, it’s never your fault” chants. This isn’t tarring all Everton fans with the same brush but if you can hear these chants it’s not just the minority in the away section is it?

Prior to kick-off on Twitter there was an Everton fan claiming an Everton flag with ‘Ashamed of nothing, offended by everything’ phrase was about Luis Suarez being a racist. The fan deserves an Oscar for his creativity with trying to link that chant with Luis Suarez. He then said the ‘ashamed of nothing’ part is because Liverpool fans defended Luis Suarez despite him being a ‘racist’. He implied that defending one of your players is something that makes you a bad person. Almost like it’s a novel idea to support your players. It’s not like Duncan Ferguson is a cult hero for Everton fans despite serving a jail sentence for assault.

Post match there was a link retweeted on Twitter. An Everton fan, who’d been at the game, uploaded a video of the away fans chanting murderers. The lad that recorded the video is probably 22/23 at the most. He wasn’t born when Heysel or Hillsborough took place yet he acts like he was in the thick of it all.

When confronted about taking pride in uploading such a video his response was baffling.

“The chant is a Heysel chant (really quick to make sure we all know it’s not about Hillsborough. Almost like a rehearsed line. Too defensive?). It’s not slanderous, you are murderers. You weren’t born for all of the Champions League wins but you sing about winning it 5 times. By that logic I can sing about the 39 Juventus fans murdered by your fans. We’ll always remember them. We may never have your glory but we’ll never know your shame.”

Evidently this lad isn’t ashamed to sing about the death of people purely to antagonise people at a football match.

He then voided everything he’d said and revealed his true colours. When asked if he doesn’t see an issue with singing about the deaths of people he responded with –

“You got us banned from Europe at the height of our ability. Highly thought of as the best. You don’t see the issue there?”

There’s irony in all of this that’s lost on these types of fans.

Apparently those 39 fans who lost their lives at Heysel weren’t the victims. Neither were their families. Juventus as a club definitely weren’t. The real victims were of course Everton and their fans.

Everton fans chant ‘always the victim’ towards Liverpool fans blissfully unaware that they’re a walking parody. These fans are the ones turning this rivalry into a bitter one. They’re like a younger brother whose grown resentful of the success after festering in the shadows for the past few decades.

It’s bizarre that those who weren’t even born when all of this went on are the main antagonists in all of this. Social media is breeding a troll mentality. People like getting a rise out of others with their radical claims. They want to offend people. The respectful fans, those that were there supporting their Liverpool brothers through it all, are no longer going to matches and instead you have this younger generation, the film-it-and-post-it-on-social-media generation eager for popularity doing whatever with total disregard to who they’re upsetting. It’s not going to end well.

It won’t be known as the friendly derby for much longer if there’s a rise of these sorts of fans going to the game. You’re not going to want to sit next to an Everton fan chanting murderers at you, not even if you’re 4-0 up.