Liverpool had a comfortable afternoon for most parts of the game against Watford, as they dominated both the possession and scoring to walk away with the three points. Watford created a couple of opportunities but Simon Mignolet was firm enough to deny them. 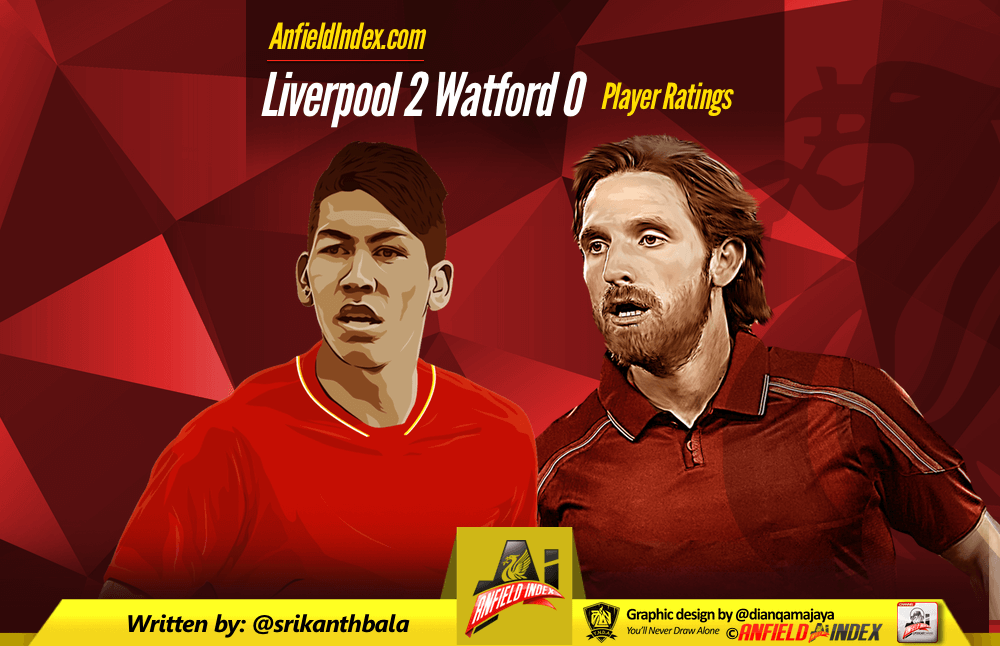 Here are my ratings for each Red.

Simon Mignolet (7) – Simon Mignolet was to be rested for this game, but had to play due to Ward’s injury in training. He had a quiet opening half as there were no major saves to make. Made a huge finger-tip save from Ighalo when the game was well poised. Otherwise he had a comfortable second-half for a well-deserved clean sheet.

Jon Flanagan (4.5) – Flanagan was back in the starting eleven after a while and he looked rusty. His passing range was off the mark and Watford players glided past him on the counter attack. The second-half continued in the same fashion as he was booked for a clumsy challenge and did precious little with the ball. The clock is ticking for Flanagan.

Martin Skrtel (5) – A very mixed first-half for Skrtel as he recovered twice to rectify his own mistakes. Stayed too deep in the face of onrushing opponents (not for the first time). Made a couple of crucial blocks, one of which was heading for the bottom corner. Late in the first-half he could not track Ighalo’s run, which should be regulation for any centre-back. The second-half was a similar story as he was caught out of position which allowed Watford to exploit the spaces behind him.

Lucas Leiva (5) – The skipper for the day started alongside Skrtel at the centre of defence, which now seems to be his position under Jurgen Klopp. Made a massive error when he stepped up and was beaten easily leaving a gaping hole at the back but thankfully it was covered by Moreno. Operated near the halfway-line as Liverpool dominated possession. Lucas continued to struggle positionally as he was caught too high, which coupled with his lack of recovery pace was often an accident waiting to happen.

Alberto Moreno (6.5) – Made a very crucial interception in the opening five minutes. Enjoyed acres of space on the left as Cathcart, being a natural centre-back, preferred to stay narrow. Considering the amount of possession and space he had, he could have done better with his deliveries into the box. Moreno was less of an influence in the second-half offensively as Watford tightened up and Moreno had to do his fair share of defending.

Joe Allen (7.5) – Joe Allen was back in the starting line up as Emre Can was rested. Made a poor pass early on where he turned the ball over in his own half, but eventually his passing rhythm returned. He often looked to release Ojo early, with mixed success. He was rewarded with a long overdue goal for his good performances this season. Allen had an excellent second-half too as he continued ticking the ball over, and his quick release almost created a scoring chance for Benteke late on.

Kevin Stewart (6) – Kevin Stewart continues to enjoy a long run in the Premier League as Klopp continued to rotate his squad. His game-play was more of safety first as usual, preferring to find the man nearest to him as much as possible. His passing tempo could improve so that he can affect the game better. Maintained his composure in the second-half to get out of couple of tricky situations.

Jordon Ibe (6) – Jordon Ibe started on the left-hand side of the attacking trident, but struggled to get involved, which was perplexing considering the space available. He saw more of the ball as he moved centrally in the latter part of the first-half and was hence more involved in the game. Ibe had a far brighter second-half as he was far more influential, often swapping places with Coutinho. He exhibited the skills, pace and power which he is known for although his end product could be better. Hit the post late on from an acute angle.

Philippe Coutinho (6.5) – Coutinho started centrally behind Benteke, but he came into his own once he moved into his more favoured left-hand side of the attack. He could have passed to players in better positions at times, but chose to shoot. The Brazilian took an early set-piece to find Benteke who found Allen for the goal. Coutinho was presented with a golden chance by Benteke which he missed with the only explanation being that it was too easy of a goal to score.

Sheyi Ojo (6.5) – Ojo had a very impressive first-half as he was always prepared to make the run into the box from the right. He caused so much trouble with his directness and pace that Watford had two players on him whenever he had the ball. He was not as influential in the second-half and was substituted for Brannagan.

Christian Benteke (6.5) – Benteke exhibited both his strengths and weaknesses in the first-half as he was often rooted in the centre of the box showing a clear lack of inclination to make runs to the near post. He used his aerial advantage to lay the ball to Allen for his goal. Linked up well with Coutinho early in the second-half and created a glorious opportunity. He could have had two goals if he was  sharper and alert when chances were created by Firmino.

Roberto Firmino (7) – Came on for Coutinho for the last thirty minutes and immediately had a shot on target. He was not to be denied later as a weak save from Gomes was not enough to deny him. Linked up pretty well with Benteke in his short cameo. An excellent debut season continues.

Cameron Brannagan (6) – A very bright ten minute cameo from Brannagan as he created a scoring opportunity for Benteke in added time. He took a solid set-piece and was very much involved in the short appearance.