Liverpool welcome Watford to Anfield on Sunday afternoon following their success in overturning a 1-0 deficit against Villarreal to progress to the Europa League final.

Liverpool are on a ten match unbeaten run at Anfield heading into the game, including four Europa League wins (W7 D3) which has seen them book their place in Basel for the final of the competition. The Reds have improved drastically on the dismal home record they had under Brendan Rodgers’ last few months and will be hoping to continue their winning ways against Watford on Sunday. 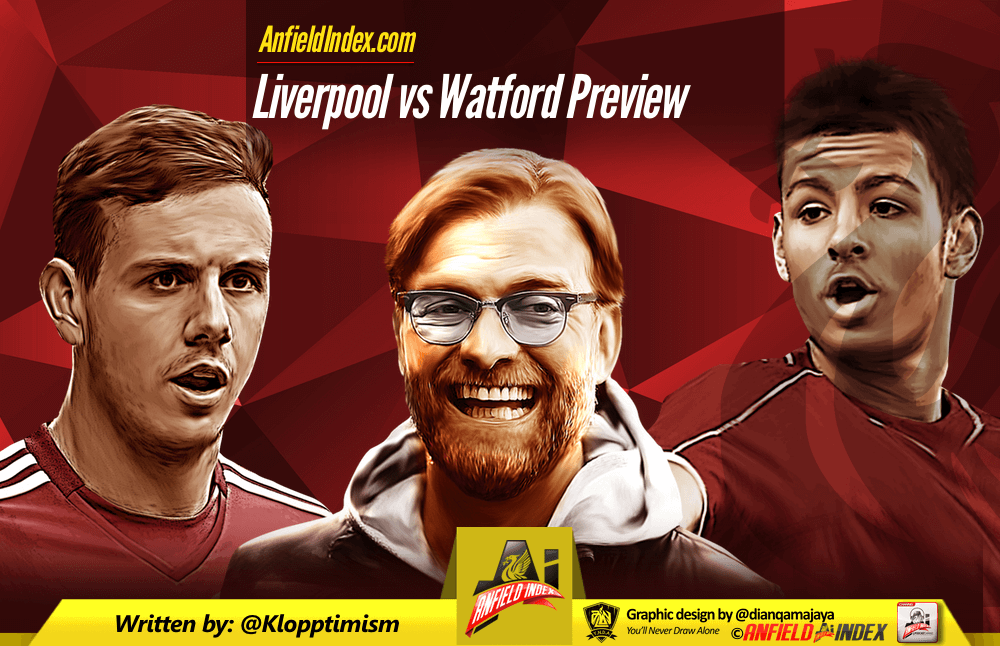 Thursday night was arguably the biggest game in Liverpool’s season, with the Europa League offering the only possible avenue for Champions League football next season. After falling a goal behind in the dying embers of the first leg, the Reds faced a harder task at Anfield, but following their performance against Borussia Dortmund many still fancied them to progress. Jurgen Klopp’s side didn’t let anyone down, producing a truly brilliant performance to wipe the floor with the Spaniards, who, from the outset, couldn’t handle the pressure they were put under from both players and fans.

Liverpool grabbed an early goal when the ball ricocheted off Bruno Soriano’s to level the tie. Daniel Sturridge who was left out of the team in Spain, re-paid Klopp for the belief shown in him at Anfield by putting the hosts in the driving seat with a low finish following some good work from Roberto Firmino. The Brazilian produced one of his best performances since joining the club, making timely runs and balls to rip open the Villarreal defence, including a sumptuous turn to leave Roberto Soldado for dead.

Things went from bad to worse for Villarreal when Victor Ruiz was sent off in the 71st minute. He received a second booking after stepping on Lallana’s foot and the Englishman certainly had the last laugh when his third goal put the tie to bed.  Despite a mere seven months in charge of Liverpool, Jurgen Klopp has taken the club to two finals and his energetic style of football has worked wonders within the team.

However, Liverpool have won only three of their seven most recent Premier League games (W3 D2 L2). They have dropped 19 points from winning positions in the league this season, with the most potent example the game against Southampton, which involved a half-time capitulation following the substitution of Dejan Lovren that allowed the home side back into the game. Nonetheless, Liverpool go into the game high on confidence and they will certainly want to maintain their current momentum ahead of the Europa League final.

Watford currently lie in 12th place with 44 points from 35 games, having already secured Premier League football for next season. They have won two of their last three games, taking as many points as they had from their previous nine league matches. The Hornets have scored just 12 Premier League goals in 2016, a joint league low with Aston Villa. Therefore, they’ll be hoping to keep Liverpool out for as long as possible on Sunday, but they’ll surely need more attacking guile if they are to come away with anything from Anfield. They have only scored four times in their last eight away league games.

However, despite their lack of goals, Watford have shown just what they are capable of this season, winning the reverse fixture by three goals to nil. Idion Ighalo and Troy Deeney proved too much for Liverpool that day, and the attacking duo will be looking to cause similar problems to disrupt the mood at Anfield following Thursday’s win. Ighalo, however, has gone 11 Premier League games without a goal.

Liverpool boss Jurgen Klopp stated: “We will need the help of the crowd because I don’t know how many more games we’ve had than Watford. We will have a few changes for sure and we will try do everything to win this game. We respect this league, we want to have the best position we can get at the end of the season.”

Watford coach Quique Sanchez Flores reflected “When you reach a target it’s easy to lose focus. We need to try and be competitive because the competition’s not finished. How is our ambition, how is our idea to try to add points in every single match we have to play? It is necessary to show everyone that we are still fighting in this competition.”

Watford’s 3-0 win in the away fixture is their biggest margin of victory over Liverpool. However, they have only won once in 11 attempts against Liverpool at Anfield, with the win coming in August 1999 when Tommy Mooney scored the only goal.

Liverpool will likely make several changes to the side that featured on Thursday night in order to rest players for the all-important final. Jordan Henderson, Divock Origi and Danny Ings will not feature but could return to action before the end of the season to give the Reds a boost.

Watford could stick with the same side that beat Aston Villa last weekend. However, Allan Nyom and Nathan Ake are pushing for recalls to the starting eleven while Etienne Capoue remains sidelined through a knee injury.

I’d like to see Danny Ward feature in goal for Liverpool on Sunday, with the Welshman impressing in the chances he has been given this season. Martin Skrtel could get a recall to the side to give Kolo Toure a rest after the Europa League games. Lucas Leiva may feature in defence for the Reds. In midfield, I suspect Kevin Stewart will be placed in front of the defence to offer some cover while Joe Allen is likely to start after featuring from the bench on Thursday.

Sheyi Ojo has excited the crowd when given a chance by Jurgen Klopp and it wouldn’t be at all surprising to see him listed in the starting eleven on Sunday, alongside Jordon Ibe. Christian Benteke may have given a rare start to allow Daniel Sturridge to rest.