Liverpool welcome Chelsea to Anfield on Wednesday night as they look to do the double over their rivals, who have had a hugely disappointing campaign.

Liverpool are unbeaten in their last seven home matches in the Premier League (W4 D3). The Reds have scored in each of their last 12 league games, their best scoring run in the top flight since April 2014, when they scored in 25 consecutive games. The likes of Roberto Firmino and Daniel Sturridge have impressed in recent weeks and Chelsea will have their work cut out for them to keep Jurgen Klopp’s side quiet and keep in the game. Liverpool will need to be conscious of maintaining their focus even if they go ahead, after throwing away a total of 14 points from leading positions at home this season – a tally matched only by Chelsea. 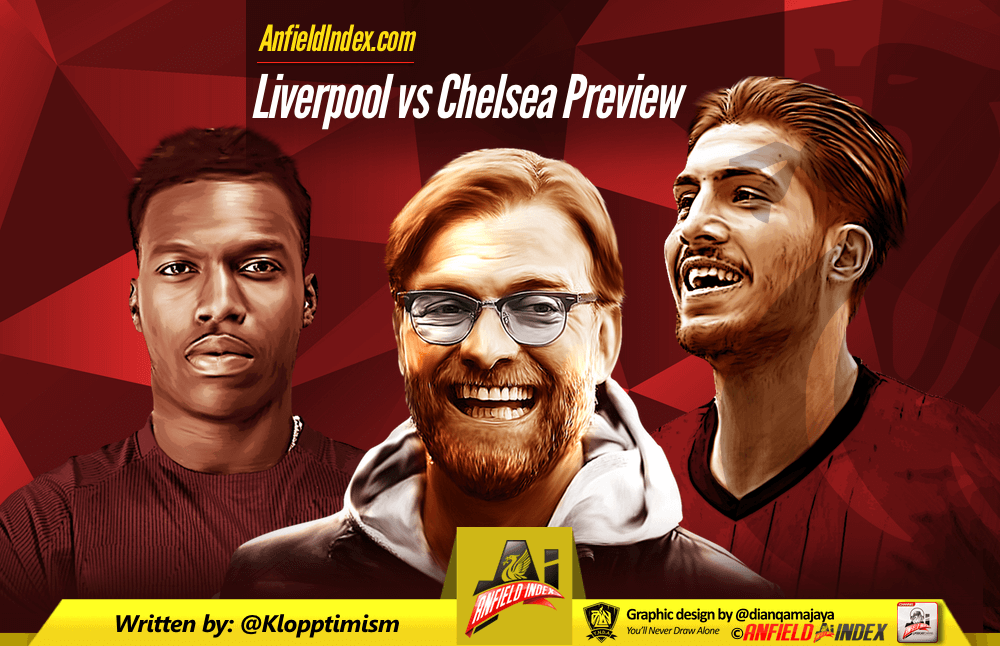 In their last game, Liverpool ran out 2-0 winners over Watford, with goals coming from Joe Allen and Roberto Firmino, helping them retain eighth place. The Welshman put the Reds in front as he guided in Christian Benteke’s knock down following a quick free kick by Philippe Coutinho. Roberto Firmino then doubled the lead when he drove a shot past Heurelho Gomes, rather fortuitously.

In his pre-match press conference, Jurgen Klopp said “I would prefer if Thursday next week, we have won two games against Chelsea and West Brom, and we are heading back to Liverpool with the cup – that would be all we want but it doesn’t work like this. If we lose the next two games, I will go to Basel still confident we can win this game. There is no fixed rule which says if you win your last two games you will win your final.”

Chelsea currently lie ninth in the Premier League, having collected a total of 48 points from 36 games. The Blues have lost two of their last three away games in the league, but won the other 4-1 at Bournemouth. In truth, it has been that kind of season for Chelsea, with inconsistency resulting in their middle table position with just a few games left to play.

However, following a miserable start to the season that saw Jose Mourinho lose his job, Hiddink has done well to steady the sinking ship and they will head to Anfield with an attacking threat that could cause Klopp’s side some problems. They have conceded 51 goals in this season’s Premier League, the first time they have conceded more than 50 goals in a league season since 1996-1997 and if they are to gain anything out of Wednesday’s game, they’ll need to be much tighter in defence.

In his pre-match press conference, Guus Hiddink reflected on John Terry, stating that, “he has been training in recent days. Of course, when you come on the pitch for training after being sent off it’s not the most beautiful face. He started to lift up his morale and trained okay. Of course, not being there in the last two games is a blow for him and for us.”

Liverpool’s only win in their last seven games against Chelsea came at Stamford Bridge earlier this season (D3 L3). The Reds have failed to keep a clean sheet in the last nine Premier League meetings, and have conceded two goals in each of the last three meetings at Anfield.

Liverpool are once again set to rotate their squad after resting a number of key players at the weekend. The Reds are expected to field a strong side despite their Europa League final coming up thick and fast. The likes of Nathaniel Clyne, Dejan Lovren, Emre Can and James Milner are set to start on Wednesday night while Sturridge will undoubtedly lead the line after showcasing some good form of late.

Chelsea will be without captain John Terry, who will miss the rest of the season through suspension. The centre back is set to leave the club in the summer and certainly wouldn’t have envisaged going out in this fashion. Loic Remy and Kurt Zouma are still side-lined with groin and knee injuries respectively.

Simon Mignolet will retain his spot in goal with Danny Ward, who was realistically the only challenger to his starting spot, currently ruled out through injury. Nathaniel Clyne and Alberto Moreno will offer width to the side, bombing forward to provide supply routes to the attacking players while Dejan Lovren and Kolo Toure, who impressed in the games against Villarreal, will partner each other once more.

In midfield, Emre Can is set to be recalled while James Milner, who has provided a number of assists this season, could have a key role to play in the outcome of the match. Going forward, the Brazilian partnership of Roberto Firmino and Philippe Coutinho will look to cause Chelsea problems on the attack and the movement and finishing ability of Daniel Sturridge will give the fans hope of securing another three points to keep up their current momentum.