Liverpool travel to The Hawthorns on Sunday afternoon to face Tony Pulis’ West Brom ahead of their Europa League final next week.

The Reds currently lie in eighth place, with 59 points after 37 games in the Premier League. Liverpool are in good form of late, having lost just one of their last eight league matches (W4 D3). In terms of their season, having started poorly in the first few games under Brendan Rodgers, Liverpool were somewhat always playing catch up on the top four places but would have fancied themselves given how unpredictable this season has been. 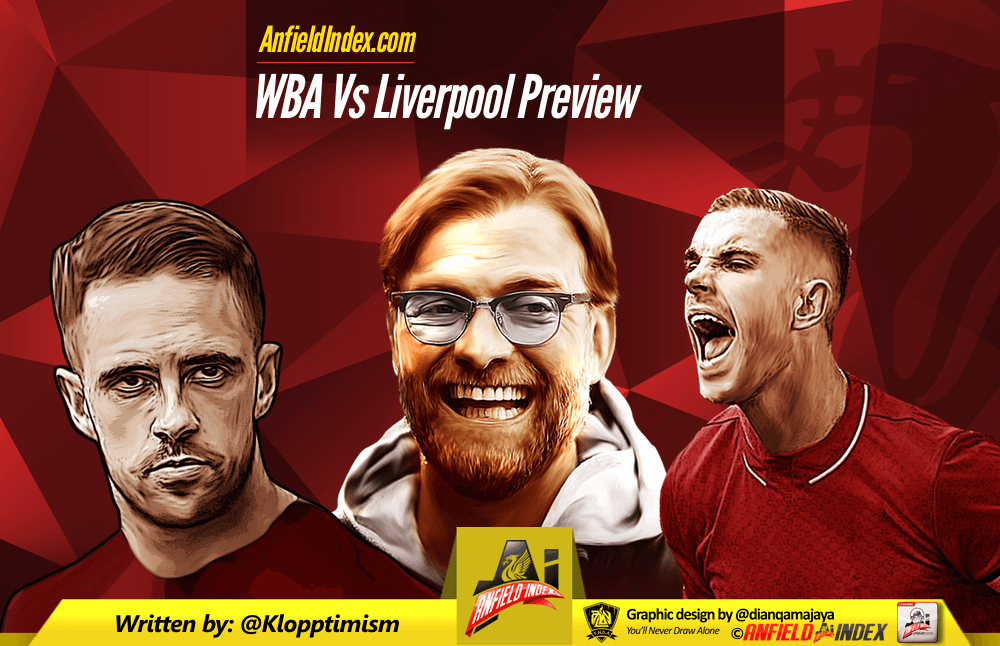 However, Jurgen Klopp’s side will miss out on the top four, with the Europa League the only avenue for Champions League football next season, something that could be crucial if Liverpool are to attract top players to the club in the summer. Jurgen Klopp has made a huge impact since joining the club and while the Reds will finish sixth at best, the signs for next season are extremely promising.

In his pre-match press conference, Jurgen Klopp stated “We’ll try to find a line-up to win at West Brom. At this moment it’s the most important thing in the world.” Thus, despite an impending Europa League final, Liverpool remain focused on the league and finishing their campaign on a high note.

West Brom head into the game on poor form, having lost their last three home games without scoring. They are winless in eight league games, having drawn three and lost five, and thus Liverpool will be confident of maintaining their current momentum into the crucial Europa League final next Wednesday night. Furthermore, West Brom have won just one of their nine previous Premier League matches on the final day of the season (D5 L3).

However, Tony Pulis will be hoping his side can finish the season on a high on Sunday afternoon, with Liverpool set to field a youthful side that could give them increased chances of getting something out the game. They have shown this season that they have the ability to cause teams problems and their poor form at present shouldn’t deter from the fact that with the likes of Berahino and Rondon in their ranks, the Reds will need to steer clear of complacency.

In his pre-match press conference, Tony Pulis stated that “I’m absolutely delighted with the way we’ve done it this season because we’re still in the Premier League. Anybody who dispels that as not being an achievement at clubs like West Bromwich Albion, they’re in cloud cuckoo land and I really mean that. You look at Newcastle, you look at Aston Villa and Norwich, and you look at the traditions of those clubs.”

Three of the last four league games between the two sides have been drawn. The teams drew 2-2 at Anfield in December, with Divock Origi’s equaliser five minutes into stoppage time rescuing a point for Liverpool. However, both sides will be looking for the three points on Sunday afternoon in the final day of the Premier League campaign 2015/16.

Liverpool could see a return to action for Danny Ings who has been out with a cruciate knee ligament injury since mid-October. Jordan Henderson may also feature after five weeks out with a knee injury while Divock Origi has recovered from an ankle injury but is set to be rested due to the upcoming final.

West Brom have no new injuries to contend with ahead of the match. James Morrison could return after training following a long term hamstring injury.

With the final coming up next Wednesday, wholesale changes are widely expected in the Liverpool side. Adam Bogdan may well gain a start due to the injury of Danny Ward while the back four will also be shaken up with the likely inclusion of a number of youngsters. Martin Skrtel may also feature to give a more experienced figure at the heart of defence.

Cameron Brannagan and Sergi Canos, who recently returned to the club following a loan spell, could be in line for their first full debuts at the club while Danny Ings may make a welcome return to the side following his ligament injury. Sheyi Ojo has been impressive lately and could start with Jordon Ibe on the other flank, while Coutinho Firmino and Lallana are all set for a rest ahead of Wednesday. Christian Benteke will surely play a part in the proceedings. The Belgian has scored six Premier League goals this season as a substitute, the most in the division.