A few months ago, Liverpool had lost the League Cup final to Manchester City, on penalties, then a few days later they exacted a bittersweet 3-0 revenge upon Manchester City at Anfield. Arguably this illustrated Klopp’s impressive ability to motivate his players, but when you consider that Liverpool played a weaker side in the latter of the Manchester City fixtures, and were utterly dominant, against a City team that still harboured beliefs of winning the title, only then do you realise how large a factor to the Liverpool team is playing at Anfield. 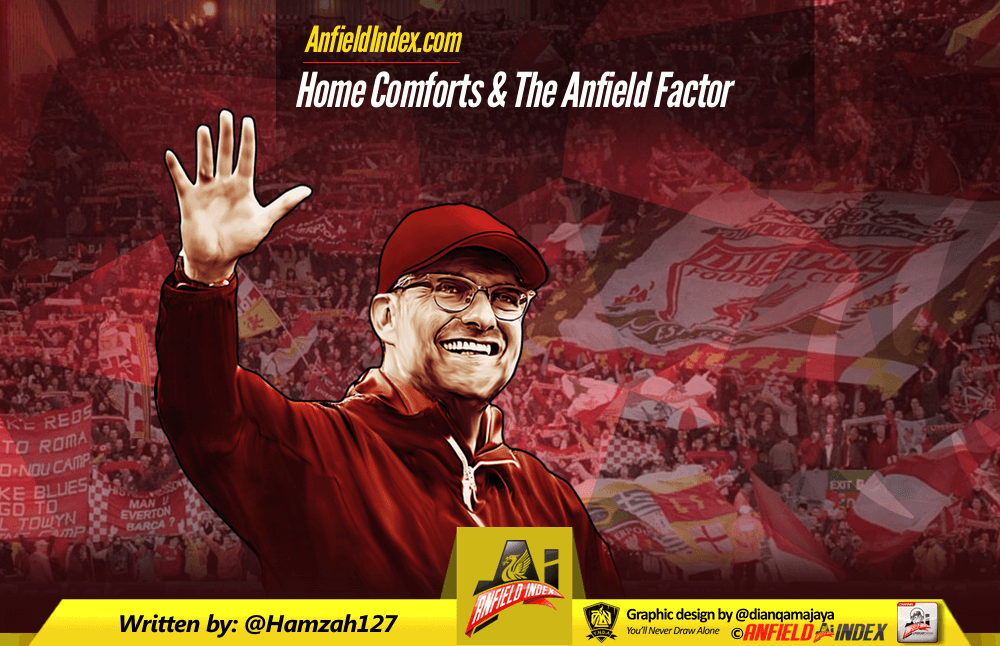 Many of Liverpool’s best performances have been when playing at home and buoyed by the Anfield crowd, but how will the team fare without the support of the native faithful in Basle – although this is a similar problem for Sevilla, who in La Liga, have enjoyed home comforts.

Liverpool are unbeaten in 14 games at home, and the crowd and atmosphere at Anfield in those games has played a huge role in this record. However, at the start of the season, Anfield was by no means the cauldron of noise it has become in recent weeks, nor did it retain the infamous atmosphere of European nights gone by (see Olympiakos, Juventus, Chelsea 2004/05). Indeed in many games in the first half of the season, the Liverpool fans would be taunted by rival fans about the ‘library’-like atmosphere. With the arrival of Jürgen Klopp though, this would soon change.

Oddly enough, it wasn’t a European fixture or match against one of Liverpool’s old rivals that saw the spirit of Anfield awaken from its slumber, it was a typical fixture against West Bromwich Albion. Having gone 2-1 down from two set pieces, Klopp avidly stirred up the crowd, and urged the team to attack relentlessly in a gung-ho fashion. The eventual goal by Origi sparked celebrations that far exceeded the occasion of a mere equaliser against West Brom, but signified something much more important, a return to a closer and more intimate relationship between the fans and the team; and regardless of any successes Klopp may bring to Liverpool, this could well be the best possible legacy he could leave for the club; something that transcends the notion of just winning, and adding a further level of camaraderie and uniqueness that Liverpool, as a both a family and a club, is extremely proud of to have, and to build upon.

Klopp’s very style of football is contagious by nature; as the players press, the crowd acknowledges and applauds, whilst his energetic and frenetic motions on the touchline match the desire of the fans for the team to win, all of which culminates in a deafening and raucous barrage of support for the home side – something that Klopp has taken advantage of not just in the West Brom game, but the Arsenal, Manchester United, Manchester City, Dortmund, Everton and Villareal fixtures.

Undoubtedly, without the support of the fans in the Dortmund game, Liverpool would have been comfortably seen off by the then favourites, and the 3-0 victory against Villareal again illustrated the power of an excited Anfield. Two seasons ago, the atmosphere and palpable electricity around Anfield almost had decided the outcome of games before they had even started, the 5-1 demolition of Arsenal, the 4-0 battering of Tottenham, and the almost inevitable 3-2 victory over Manchester City showed that victory is not just a team effort, but one from all aspects and faucets of the club, most importantly though is the contribution of the fans.

With Liverpool facing off against Sevilla in Basle, in a notably smaller stadium, with extremely limited capacity for Liverpool supporters, the team will miss its most impressive weapon – the ’12th man’. Recent games against Chelsea and Newcastle, as well as the Sunderland fixture show the effect on the team when the home crowd is uninterested; and Liverpool’s performance in the League Cup final looked short of inspiration for the most part, which may be responsible for Liverpool’s poor showing in most of the game.

Now, when pitted against Europa League specialists Sevilla, and being dubbed as favourites by pundits in England, the pressure is firmly on Liverpool, and they unfortunately will not be able to count on something special from the fans to push them the extra mile. However, it will be a stern test of character and steel which may well determine the future of many Liverpool players for next season, but under the guidance of Klopp, and perhaps with a few key players taking the onus, Liverpool may not need their 12th man to secure one of the most important pieces of silverware in over a decade.