There’s a train of thought currently steaming along that suggests not competing in Europe next season is actually a blessing for Liverpool and Klopp. That it was a Champions League or bust situation, and bust was worth more than a spot in the Europa League.

It’s a train of thought that I won’t be boarding, and have never truly understood. 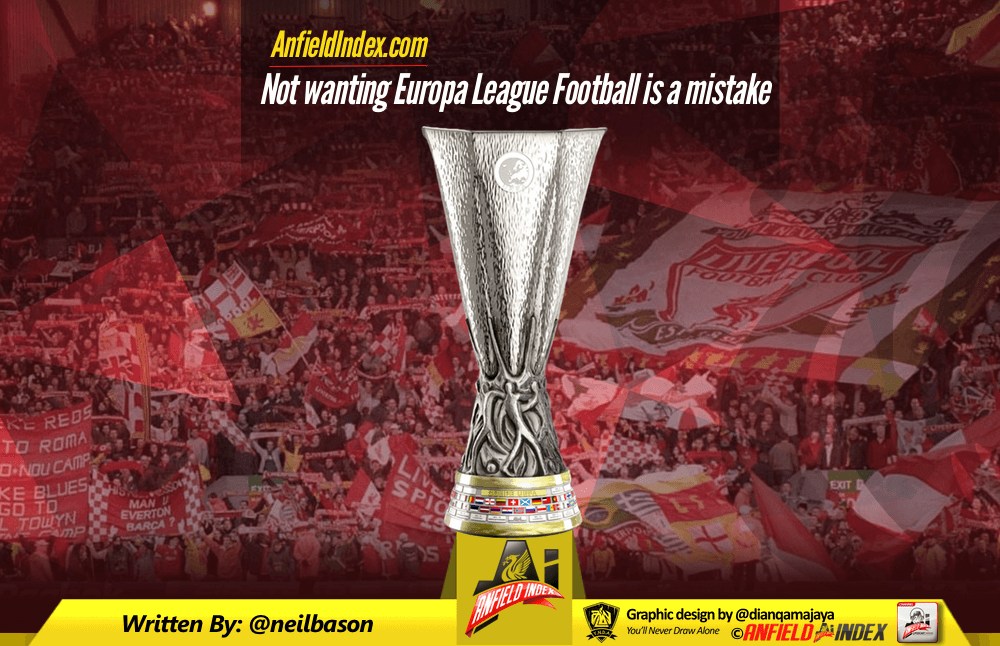 In both the run up to, and the wake of our two cup final appearances, and ultimately failures, this season, the usual phrases were being tossed out there by rival fans; tin pot trophy, Mickey Mouse Cup, plastic cups, and so on. The typical words adopted by most fans once their own club is eliminated from the competition, used to downplay its importance and relevance in the grand scheme of footballing things.

But, let’s be honest, those phrases are utter rubbish.

My own train of thought, a pretty sparsely populated train I’ll admit, is that we should have gone all guns blazing for Europa League football next season and that missing out should be accepted as the bitter disappointment it is rather than glossed over with same downplaying of the competition as something we’re better off out of anyway.

I’ve always believed it’s not the status or size of the competition, it’s the club that’s in it. It makes absolutely no difference to me as a fan whether I’m watching our club in a League Cup match or an FA Cup match, a European Cup match or Europa League match, it feels the same. Watching us win the UEFA Cup under Houllier felt no different emotionally than watching us win the European Cup under Paisley. The same nerves and buzz were present during the build-up, the same in-game tensions were gnawing away throughout, and the same euphoria erupted when we clinched victory. The name of the cup mattered little, it was all about the journey and the occasion, and let’s face it, when Liverpool are in town the roof is always raised. Great and wonderful moments that live forever are born regardless of the status of the competition.

And it’s this that leaves me deeply disappointed that we won’t be competing in Europe next season. By missing out, we as fans miss the possibilities it brings. The win against Dortmund via the forehead of the towering Lovren was the stuff of legend, some compared it to that night in Istanbul, it didn’t reach those levels overall for myself simply due to sheer scale of the task in Turkey that night, but as that ball hit the back of the Dortmund net in stoppage time, Xabi Alonso may as well have just knocked in the penalty rebound back in ’05. The euphoria felt the same. The greeting of the coaches outside Anfield against Villareal, legendary stuff again. Dumping the Mancs out of the ‘tin pot’ trophy they seemed so desperate to win just moments earlier, and the return of raucous European nights at Anfield under the floodlights and a booming Kop are things that transcend the name of the cup being competed for.

I hear arguments that without Thursday night football we stand a better shot at the league, but I’m not convinced. We’ve had European free seasons and still seen no league titles. Sure we’ve had a good go, come in runners-up, but as a great man once said, “If you are first you are first, if you are second you are nothing.” Missing out on a Europa League spot guarantees nothing in terms of the league, but being in the competition brings with it promises of more magical nights home and away, a chance to battle it out with sides like Dortmund and Sevilla, and the possibility of more moments of utter euphoria. For myself that alone outweighs the notion that without the Europa challenge we are stronger in our league.

I may be in the minority here, but the competition has never mattered. I’ve always wanted to watch the lads win and those special games always bring the same feelings. Those matches where we claw our way back, or snatch victory from the jaws of defeat, or demolish a fierce rival, or as is sometimes the case, we end up shattered from defeat all stand on a level playing field for myself as a fan. League Cup, FA Cup, European Cup, it’s all the same to me, just so long as Liverpool are playing in it.