You could argue that Alberto Moreno is the most unpopular Liverpool player this year, and has become the scapegoat of the season. Twitter explodes like a volcanic eruption after every match lost, drawn, or even won. The Spaniard, who arrived in the summer of the 15/16 season from Sevilla has been consistently criticised for his “inability” to defend.

He’s been criticised for leaving acres of space behind him when he bursts forward and joins the attack, but he has never received an ounce of praise the other parts of the work he’s done. 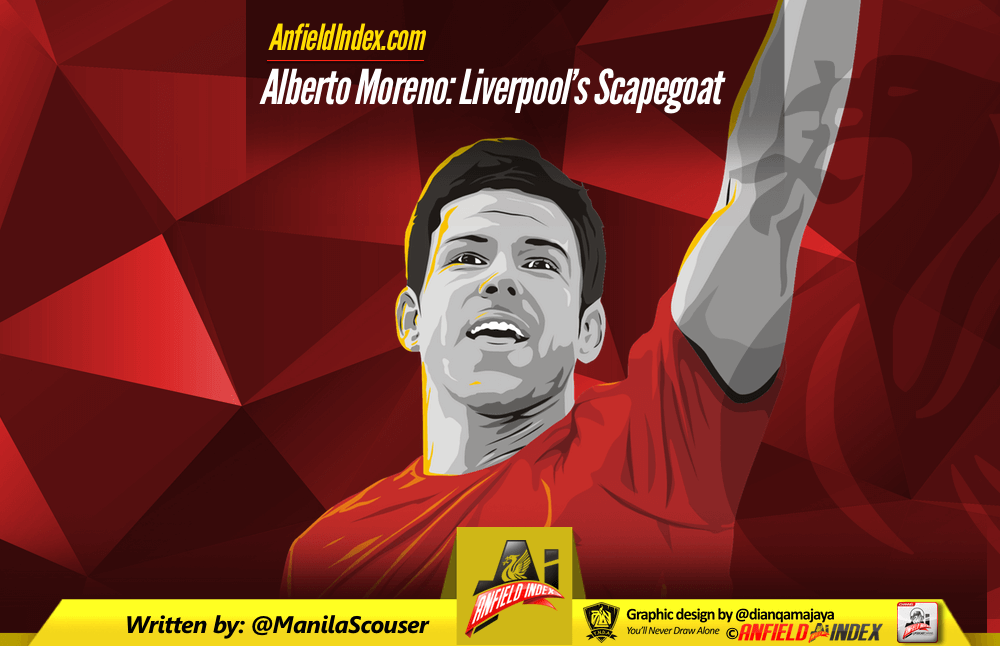 Let’s look at a few league stats on both the defensive and offensive end of the pitch.

(I added Nathaniel Clyne to compare his counterpart, so please don’t think I’m an idiot for adding a RB)

At the offensive end, Alberto Moreno is one of the best full-backs in the league. Defensively, he’s not the worst in the world. And by the way, he has zero goals conceded from defensive errors, but so has the other four players above. Sure, you could argue that his tackles are highest among the five because he’s often had to track back and tackle, and I completely agree.

But Klopp’s system has always required his full-backs to join the attack, and I’m 100% sure of this after my expert research on YouTube. But seriously, even while he was at Borussia Dortmund, Schmelzer, Piszczek, and Durm had always played a role high up the pitch. Even now under Thomas Tuchel.

Brendan Rodgers’ system called for the same thing, especially in the 2015/16 season where his focal point of defense were three centre-backs, and Moreno played the role as a wing-back.

The Dortmund full-backs have probably never been on the receiving end of the criticism Moreno does. Why?

Mats Hummels, Nuri Sahin, and Sven Bender. That’s why. These players are at the top of their game, and they cover their full-backs when they go forward.

We have Emre Can, Joe Allen, James Milner, and Jordan Henderson. These are not defensive midfielders, if you don’t already know. They’re makeshift DMs. All of them run like cheetahs and join Sturridge & Co., and when someone else loses possession, it’s Moreno’s fault because he’s high up the pitch.

When Sakho is beside Moreno, we often have a good game. There’s an understanding between them and in result, he’s covered most of the time, and during this period, Alberto’s critics have gone hiding and changed their costume into Moreno fanatics.

Sure, we can go buy a full-back who defends primarily, say Jonas Hector, which is what we’re all craving for and sell Moreno. But why do we have to sacrifice the attacking part of our system when we can instead buy a player who just sits back, and allows Emre Can and Moreno do the offensive work? Defence covered, and the offence for full-backs is existent. That will not only remove the space Moreno leaves, but also encourages Clyne to join the attack more often. His offensive stats look appalling.