Countless Twitter debates with fans of opposing teams centre around the idea that Liverpool are no longer a big club. Historically the giant of English football, the Reds took their domestic form into Europe, conquered it five times, and have the actual trophy to prove it. The clubs C.V would stand up to examination against anybodies. 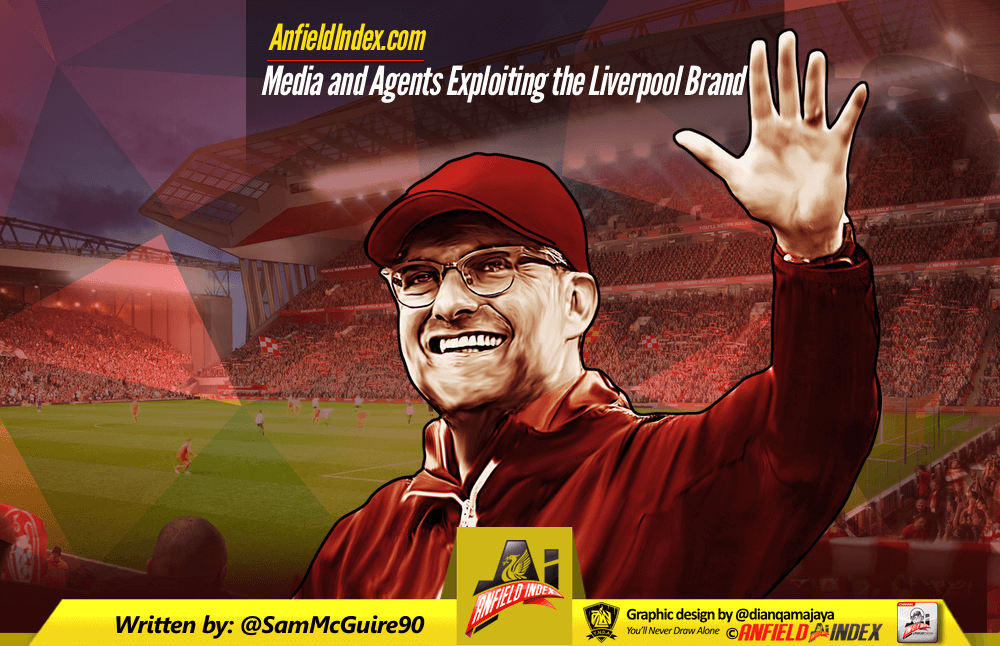 However, recent times have seen an abrupt end to the dominance Liverpool had enjoyed over England, and Europe, in the 1980’s. One European Cup victory and zero Premier League titles in a quarter of a decade. No longer regularly in the Champions League, the club has slid into mediocrity. Despite such a lack of silverware and recent success Liverpool are still one of the most popular clubs in world football and their reputation in the game is up there with the best. They really are the definition of a sleeping giant.

It’s this, the potential that one day the club awakens from its slumber, that both the media and agents of players take advantage of. The Liverpool brand is used as a pawn. The club currently have a reputation for paying eye watering prices for, let’s put it politely, questionable players. This is the fuel l that is used to stoke the bonfires of the journalists and the agents.

Sadly, the way media online has evolved means clicks reign supreme. It’s no longer about the quality of the content, instead it’s about the amount of traffic the pieces bring to the site. Any link with the #LFC tag immediately generates interest. Liverpool fans are extremely proactive in their quest for news. Starved of success they now celebrate signings like they used to celebrate trophies.

Media outlets have cottoned onto this, along with the fact Liverpool love overspending on mediocre players, to embellish links and rumours. Papers not known to be reliable when it comes to Liverpool have started including links to the club in the headline and the body of the piece of news when reporting on apparent transfer rumours in the hope of garnering more interest online.

Take the links to Jamie Vardy for example. The link to the Leicester City forward makes absolutely no sense (age, style, quality and cost), the Liverpool Echo came out and point blank denied the rumour yet it didn’t stop websites running with the whole “Arsenal pip Liverpool to Premier League hot shot”. Sensationalising an already unbelievable story and trying to milk it for all the clicks it’s worth.

It’s happened numerous times throughout this summer already. Links to Theo Walcott, Kieran Gibbs and Shane Long are all nothing more than rumours and the only credible aspect is the fact the Reds have a history of spending large amounts on Premier League proven players. Nothing more, nothing less. More often than not the report will link lower end Premier League clubs then add Liverpool purely for the traffic aspect. I know people who run news sites and the majority of them say news relating to Liverpool is always popular.

These sites bait Liverpool fans into clicking onto their website.

Liverpool throughout their history rarely sign big money world class footballers yet the media constantly link the club to these big players? Why? Simple really, common sense goes out of the window in the hunt for news. “Liverpool linked with a £94 million move for Gonzalo Higuain”. Intrigue will always get the better of fans even though they know deep down there’s a 0% chance of it happening.

It has to be said, though, that it’s not always their fault. Sometimes they’re given the tainted information by their sources. Information that comes from agents of players.

There have been times in the past that agents of certain footballers have invented interest in their client from bigger clubs as they try to drum up interest in the player or get them a new deal.

Liverpool tend to be their go-to club. It’s not uncommon to see a player being linked with a move to Anfield before amazingly being offered a new deal a few weeks later. Cast your minds back to Summer 2014 when Liverpool apparently showed an interest in Diego Costa only for the striker to sign a new deal at Atletico a week or so later.

Samuel Bastien, a Belgian youngster looking for a move was recently linked to Liverpool and the deal was practically done by all accounts. It was his agent in the media talking up the interest, the deal and even the fee. A few days later reports suggest the complete opposite. However, Bastien’s name was in the media for a good few days purely because of the link to Liverpool. A successful tactic by the players agent.

So are Liverpool a big club?

If the club wasn’t big or popular then the Liverpool brand wouldn’t be used by the media for clicks and the agents to get their clients into the public eye. It’s a product of success mixed with the questionable transfer strategy of yesteryear. The club is an easy target. It doesn’t have to be viewed solely as a negative, though. In a weird and twisted way it implies we’re still a big club, even without the success. Other clubs couldn’t stay relevant without success like Liverpool have.