Legacy. Heritage. History. For an enterprise that had reached the zenith of excellence, conquering all more than once, yesteryear glories can be very heavy on its shoulders. It is almost suffocating for the same enterprise to rise above cold dark times.

The sense of entitlement endeared through our legacy, our heritage, our history, can only make us myopic in our quest for achieving the same heights of past glories. “It’s bound to happen. We can win it again. We did it so well in the past, we should know how to do it in the future”. Like blocks of cemented concrete chained to a dead body in a lake, the self-entitlement we so proudly suffer from, drags us further down from the reality up above. 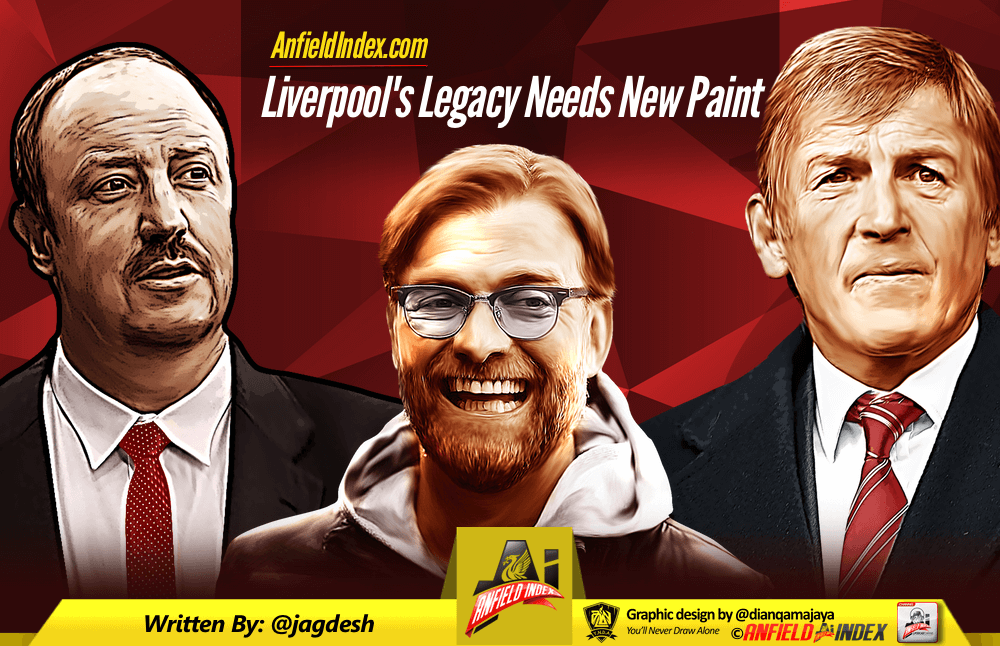 On the other hand, our legacy, our heritage and our history can also redeem us from settling for second best or mediocrity. We demand excellence because we were drawn to the excellence in the first place. We are defined by how we project ourselves based on the memories we have of ourselves.

For Liverpool fans, we are now at the crossroads, we are now no surer on how we choose to treat our legacy. Some of us hold on dear to our past, always hoping, always expecting that the next season will be our season again. Some of us are too jaded from the long wait since we last thoroughly conquered our competitors. Too many false dawns, our very own age sucking the enthusiasm out from our bone marrows as the sands of time flows downwards.

I came from the generation of pre-Premier League. Of Rush. Of Barnes. Of Beardsley. Of Dalglish. I endured the false dawn that was French, the triple conquests reminding me of how great a giant we were only less than a decade back. I saw another generation sprout from here, happily listening to me and my generation’s voice harking loudly that the good days were back. But they never did, although it sparked hopes up. Memories from the late 80s were still fresh, and we were sure of our legacy. We remained steadfast in belief that our times were back. Then the heart-attack and we lost ground again.

Istanbul happened and this time it was no false dawn. It brought us back ol’ Big Ears for good. This time, the newer generation sprung forth bigger, almost bridging the gap with the old guard of the 80s, in terms of size and numbers. Memories from the late 80s now afresh again, but eclipsed by the Istanbul campaign. The generation of Gerrard, of Alonso, of Torres. Europe was our playground and we challenged Ferguson for a bit. Then the civil war, and we lost ground again. This time mirroring an utter collapse.

Istanbul was never too late but it was more an anomaly than the norm. A decade and half after the late 80s, and we were finally back on everybody’s radar, we were back in the big leagues but it was a spike in a graph full of valleys. If further mystified our legacy, much to our detriment because now being in Europe is akin to auto driving on the highway way above the speed limit. Five years down the road from Istanbul, and qualifying for the tournament was in itself something to achieve let alone competing to win the damn thing. No new generation of Reds after Istanbul. The legacy had a new coat of paint and was somewhat intact.

Kenny came, and the old guard of the 80s saw some light at the end of the tunnel. Sadly, the memories didn’t really refresh themselves. It doesn’t work that way. Our legacy, our history again made us hope that someone time travelling from the 80s can repeat his legacy for us all over again. We lost ground again. But slowly and surely, as the rebuilding process reset itself a couple of times, the legacy began to lose its shine. Like printed photographs fading over years, the colours no more as bright as they were, our memories, and our legacy slowly ebbs away.

Another spike came in the form of a toothy swashbuckling campaign that challenged for the title, but the false dawn that followed was even harsher, as the meekly manner of our appearance back into the Champions League showed how much ground we’ve lost. Now the legacy has lost its shine, the false dawn that it was, typified ourselves as the giant that just can’t fully wake up afresh from slumber. The self-entitlement and the Liverpool Way (whatever it means today) can be found in small pockets amongst ourselves, but the biting reality has somewhat cured our myopia of how we would project ourselves and what we would expect of the next season.

Even the German resurgence is now discussed in a very optimistically cautious way. Hushed, calculated, weighted with constraints, tinged with hopes as always but no more tarnished with high expectations that our legacy demands. The legacy is still intact, the shine still not back, but it’s now kept somewhere safe and secure.

Having said all of that, I do want to see a new generation born from a fresh coat of paint, painted on our legacy by that same German resurgence. I have a feeling, very cautious now, that we might have a reason to start the painting soon.