I understand, you’re scarred. A fanbase living in perpetual fear, of the failings from previous managers and previous owners. Unable to let go of all the nearly moments, of all the false dawns. You’re sick of word transition, of buying potential. Tired of watching rivals attract some of the finest players in Europe; while your club conducts the longest transfer saga’s in human history. All the while knowing your club will still raid Southampton for what feels like a 17th time (and breathe). I understand it all, I really do, but this doesn’t quell my support, nor does it dampen my overriding hope that a significant change happened last season, one which given time will reap infinite rewards. 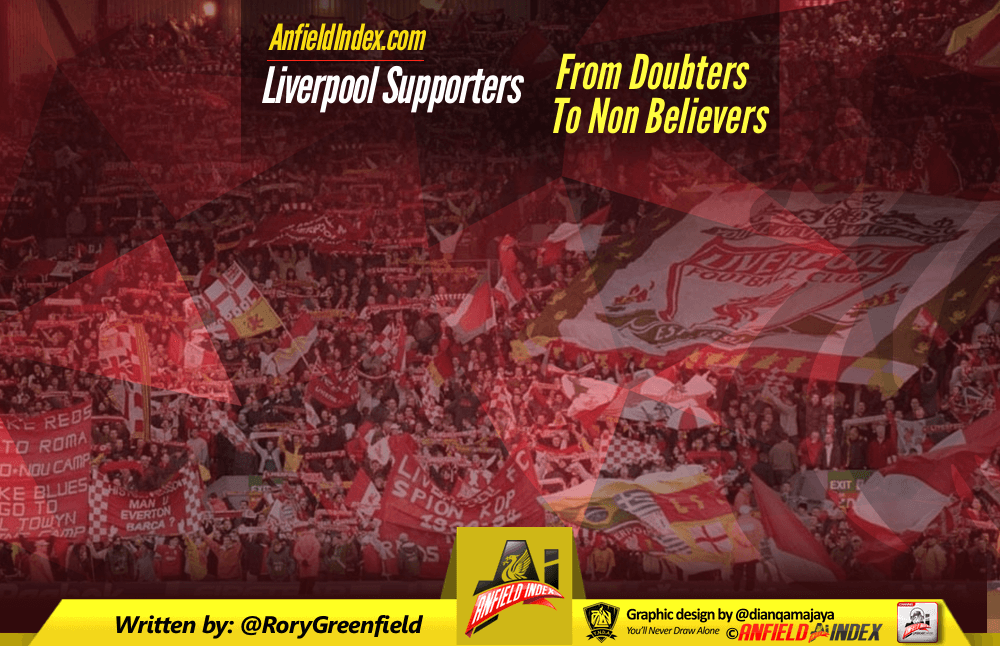 I’m not writing this with a hope that everyone agrees with me. I love the diversity in the fanbase, with the differing opinions that educate and inform. My wish, is just that Klopp is given time to implement his identity and blueprint onto this team. That new and existing players are given a chance to prove their worth and some current perspective is considered. We have a squad that needs serious renovation and development, which isn’t a quick fix, but none of this is in relation to Klopp. I have faith, but feel many have lost theirs.

On the of 8th October 2015, FSG made the most significant change in the clubs fortunes, since they sanctioned a deal for Luis Suarez. They appointed Jürgen Klopp. This signalled a change in my hope and expectations, that had all but reached rock bottom. Before his arrival if was a difficult, almost bitter time to be a Liverpool supporter. After the shot of adrenaline of 2014/15, the 18 months which followed, was a sobering and sombre period. When Rodgers finally left, I was numb.

Jürgen didn’t quite ride in on the white stallion, but his arrival was certainly timely. I was instantly excited, I’d written about him being the perfect candidate before his arrival and honestly couldn’t believe he was joining. I personally still think it’s underplayed quite how significant Klopp’s appointment is for the future of this club. He’s a world class manager of which there are few and yes you need the talent in the squad to win trophies and titles, but without strong leadership, players potential will never be fully realised.

For me Jürgen’s the key to this clubs revival and luckily for our supporters, he’s here for the long term, not just looking at a snatch and grab of that elusive EPL title. Having spent 7 years at both Mainz and Dortmund, Klopp didn’t take this job with a short term mindset. He knew fully well coming in, where this club had finished in the previous seasons, he knew there was no short term solution, no magic wand. Supporters have been patient, I respect that, but now more than ever before we need to give all our unified support to this team.

Despite many writing off last season as early as January, when injuries struck and no movement in the transfer window, left everything cold. Jürgen’s attitude and positive infectious nature, gave me hope, it gave the players hope. He didn’t look for excuses in this expensively assembled squad. He fought to harness every ounce of the ability at his disposal and whilst we fell at the last hurdle (twice), it was one hell of an exciting journey. It’s only just the start of what’s to come. In fact I don’t just hope, but expect to see many more finals under Klopp’s tenure, with a different outcome to this season’s fortunes.

His honest approach is refreshing, not just as a supporter of Liverpool Football Club, but as a lover of the game. For too long managers have denied seeing incidents, they’ve blamed mitigating factors for defeats, referees, injuries etc. Not Klopp, he accepts defeats honestly and gracefully, in the view that he can use that emotion to fuel players, to avoid the same mistakes happening in future. That honesty and self awareness is one of the reasons I’m still so optimistic, despite teams around LFC strengthening both on and off the field.

One significant change under Jürgen’s management is that he notably protected players, where possible from media spotlight and supporter criticism. He had no negative words, or thoughts openly about players ability, or performance levels. Any criticism of performance, he took square on his own shoulders. He accepted victories with happiness, adulation and with respect to the supporters, who he feels have a direct correlation with the clubs fortunes. Many times Klopp’s spoken of support, of fans leaving the ground early. He understands what supporters want and that’s hope.

I distinctly remember the negative reaction from rival fans, when he took the players out onto the pitch against West Brom. They directly applauded supporters who celebrated as if it was a victory, when only a draw was claimed from the jaws of defeat. In that moment he was looking for a reaction from these players, a sign. It worked, because his never say die attitude started to become ingrained into the players he coached. Fighting back from losing positions, most memorably against Dortmund, became a regular occurrence under Klopp, something never consistently achieved under Brendan Rodgers. 12 times in total this happened last season, which is indicative of a significant change.

In my view it’s a combination of self believe and far increased fitness levels that paid dividends. You can directly see the evolution of this team and particularly of certain individuals. When Jürgen took over, it wasn’t just supporters who didn’t believe, but the players too. This has clearly changed. The players look hungry and full of desire. The supporters have began to find their voice once more, which will only prove vital in the coming season ahead.

I can’t deny there are moments of jealously when other clubs open the cheque book and sign a player, that you’d known would be successful in your clubs side. But I see no need to dwell on this, or doubt the suitability of the players we bring in this summer. They’re all signed with thought of where they’d fit in this side. Of the attributes they bring individually, but more crucially of the balance and improvement they bring the team. They’re considered signings, not just chosen at will or by random.

Many supporters fear the arrival of new managers at City, Chelsea and United, with the financial muscles that will be flexed in the transfer window. I understand why, we need to gain ground not lose it. But our model isn’t the same as other clubs, but that’s not to say it’ll be less successful with Klopp. I can’t predict the outcome of games yet, if the season. But when do thing’s ever play out as predicted. Klopp will be fazed by antics, he’ll keep striving and working to improve his players and his results, which is ultimately what matters.

After almost 18 months of stale lifeless football, I’ve began to enjoy watching my beloved club once more. I’ll always support Liverpool football club, but surely it’s about taking pleasure from the club you support? I feel this is lost with sections of the fanbase, and I don’t understand why. Yes success on the pitch is crucial, we all want that, we all crave it. But to watch high tempo, high energy football played, with real intensity and passion, is a joy for me.

With only the Premier League to focus on most weeks, each game will be approached with the same respect and level of significance. Jürgen will never rest on his principles, he isn’t here to just make up the numbers and will know exactly where the failings of last season happened. Don’t underestimate his ambitions, he’s desperate to win and he hates losing. It’s never going to be smooth sailing, but when has it is ever been as a Liverpool supporter?

One thing I guarantee is football under Klopp will never be dull. It may not guarantee instant gratification, the title we all desire. But it’ll certainly put a smile on my face, it’s doing so now just thinking about it and I’m already having withdrawal symptoms. Jürgen eats, sleeps, breaths and lives football, just like all of us and we’re lucky to have him. I cannot wait for the 38 game journey to begin, all over again.