Philippe Coutinho is a player you would go to games just to watch him play, even if you were a neutral or supported another club. On his best day, there’s arguably only a few players in the world that can provide jaw-dropping moments like he can.

In our title-challenging season, Coutinho was arguably the biggest piece of the puzzle. He tallied a whopping 64 chances created and provided 57 key passes. In the process of our 100+ goal campaign that rocketed us to 2nd place. 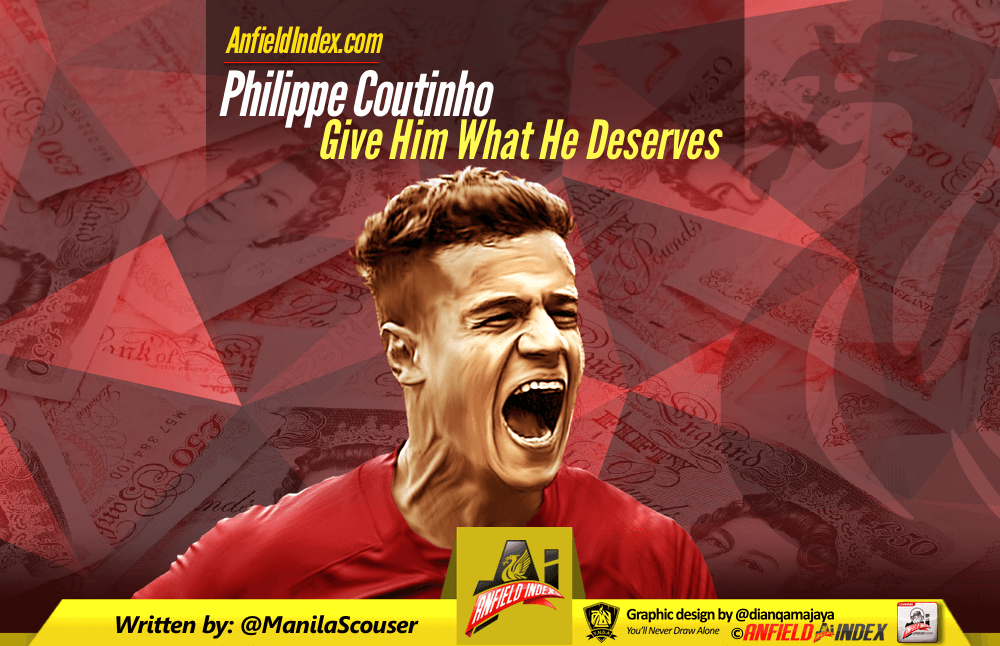 When the little magician signed for Liverpool in January 2013, he arrived under a period of transition with the departure of Dalglish and in the middle of Brendan Rodgers’ first season as manager of Liverpool Football Club. Fans were underwhelmed as we were looking forward to a Wesley Sneijder (thank you, transfer committee!) transfer.

Since then, the Brazilian has produced magic after magic performances. He quickly became a headache to every Premier League defender with his ability to dance around them.

Over a year later, witnessing the departure of Luis Suarez, he finds himself neck-deep into another period of transition. Liverpool had lost their star man and were unable to find a suitable replacement. In result, he had taken it upon himself to produce more. He had his own Goal Of The Season competition with outrageous goals in the Premier League and domestic competitions.

The end of another disappointing 14/15 season had Coutinho smack down the middle of another period of change twice in a year. The departure of Steven Gerrard and Raheem Sterling before the new campaign had begun, and the arrival of Jurgen Klopp in October the same year.

Philippe Coutinho is Liverpool’s best player. There’s not even a debate about that. He is Liverpool’s star player. Numero uno. Borrowing a few words from one of my colleagues, the only reason he lacks consistency is due to the inconsistency of the Liverpool squad and system.

Apart from all that, he’s still a young player with plenty more room for improvement, and there’s no other manager that could harness that talent than the one currently at the helm of the club

But he stuck with us. He has provided everything that has been expected of him since he signed up to date. But the club hasn’t reciprocated.

As it stands, there’s no player who receives more than £200,000 per week at the club. Coutinho deserves that, as rightly said by numerous people including Graeme Kelly in Episode 21 of the Red Room Podcast.

There are some players on Liverpool’s payroll that make more than they should, yet Philippe Coutinho is severely underpaid, given the circumstances he’s been through and his production despite transition after transition. Even if he signed a new contract last year, his performances since then has been more than enough of a reason to award him a new, hefty bump in salary.

A few weeks ago we were disgruntled to the core at the sight of his possible departure, with Barcelona and Paris Saint-Germain rumoured to have strong interests in snatching him away from Merseyside. Thankfully, those rumours were put to bed for the meantime.

Missing out on Wesley Sneijder could possibly be the best failure Liverpool has had in the past decade.

So, with this, I say to you, Liverpool Football Club. Your move. Don’t wait for me to start a petition. Because I honestly will. We love our little magician, so give him what he deserves.