It’s been a busy summer of ins and outs at Anfield so far this summer, with more to come it seems. But, has this been a good window for Liverpool with the business that has been done?

Joel Matip and Marko Grujic arrived this summer, but both deals were agreed back in January, with Matip a free transfer following his contract at Schalke 04 expiring and Grujic staying at Red Star Belgrade on loan. Grujic immediately captures your attention with his physical presence, the lad is one big unit, but from what he’s shown in pre-season, the lad can play. For around £5m, he looks to have the potential to become a bargain. Matip could prove to be a shrewd piece of business, tall and good in the air, but clam and assured on the ball, he looks to be Jürgen Klopp’s preferred option to play right centre-back, a position that has been a problem for Liverpool since Jamie Carragher’s career was coming to a close. 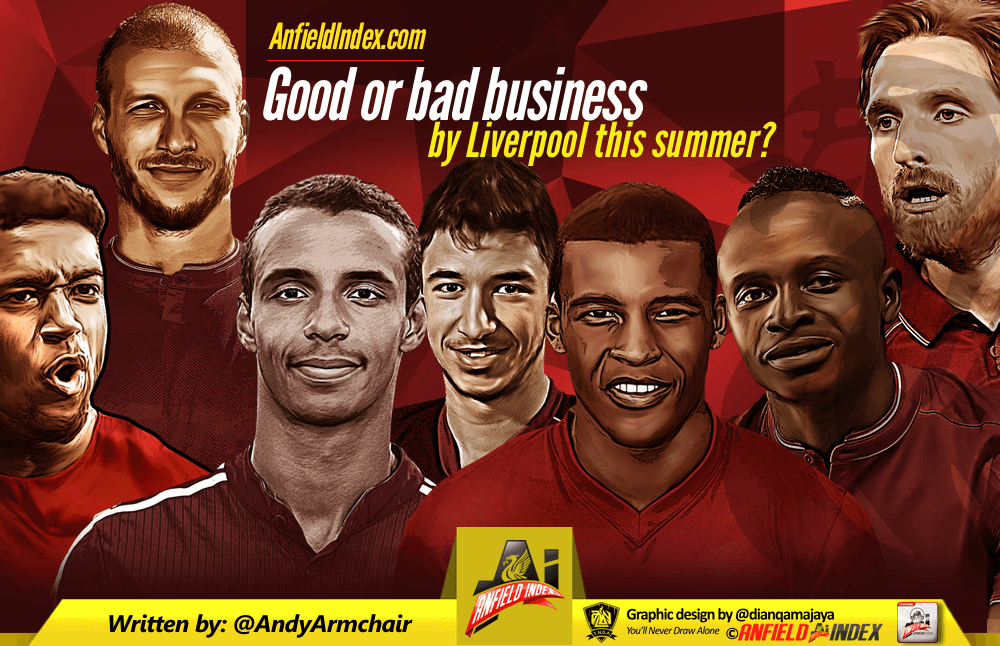 I think every Liverpool fan was in agreement that a goalkeeper was a priority and the signing of Loris Karius for just £4.7m from Mainz could be the solution for years to come. I quite openly had Timo Horn of 1.FC Köln as my preferred option, but had been impressed with Karius in the Bundesliga. He’s already shown he is very confident and will no doubt get to demonstrate his lightening reflexes and agility once fit again after his very unfortunate injury.

Sadio Mane was not a player I was admittedly keen on because although it was clear he has talent, he often looked to me as though his feet and brain were not always on the same wavelength, but perhaps Klopp and his staff will be able to maximise his abilities. Georginio Wijnaldum was a player that stood out for Newcastle last season and impressed me whenever I saw him play, my only reservation on him was where he fits in as he was often quite advanced for the Geordies. I’ve heard he played a more orthodox midfield role in Holland and Klopp has eluded to that, he will certainly add more goal threat to our midfield so I’m looking forward to seeing how he does.

The £4.2m signing of Ragnar Klavan from Augsburg was one that seemingly came from nowhere and surprised many. It appears the Estonian has been brought in to provide some experienced cover and I feel he can also provide Joe Gomez the room to breathe and naturally develop without pressure on his return from injury.  The free transfer of Alex Manninger similarly gives experienced back up to Karius and Mignolet, with Danny Ward out on loan.

Speaking of Ward, his loan move makes sense because he is not going to get much game time at this stage, so a loan could help him develop. Meanwhile, Adam Bogdan only being loaned out to Wigan, rather than any permanent move, is slightly disappointing but a signal that he has no future at the club; which will be a relief to many. Jon Flanagan is another heading out on loan to Burnley, with the once promising full-back struggling last season after a long period out through injury. If he can stay fit, then perhaps a loan spell can resurrect his career, even if that isn’t at Liverpool.

This summer has seen some high profile departures though, with Martin Skrtel near the top of that list. Whilst he has been a good servant to the club, his inadequacies had been an issue in recent years, so his £5.5m move to Fenerbahce is a positive one for all parties.

Jordan Ibe has always had huge potential and although there have been flashes of it, sadly his progress stalled and even began to reverse. Perhaps his move to Bournemouth will be exactly what he needs and the buy-back and sell on clauses, as well as the £15m fee represent excellent business by the club. Bournemouth also snapped up Brad Smith, a player who had a few good outings and showed good crossing ability and great pace, but sadly was never Liverpool standard. The £6m received for him is, in my mind, incredible business.

Getting £2.5m for youngster Sergi Canos from Norwich is also good, considering how far he was from the first team and extremely unlikely to have had a future. The same can be said for Jerome Sinclair and the £4m received for him going to Watford. Jordan Rossiter is another young player sadly not first team standard and Rangers could be a chance for him to carve out a decent career. Joao Carlos Teixeira is a nice player and clearly talented, but it was unlikely that he’d ever establish himself at Liverpool, so a move to Porto should be good for him.

Arguably the most controversial departure this summer is that of Joe Allen. He showed in glimpses throughout his Liverpool career and this summer for Wales what a good player he is, with nice technique and passing ability, but despite his cult status, nice is probably what best describes Allen and as popular as he is, Liverpool have and do need better than him. Harsh as that may sound, getting £13m from Stoke for him with one year remaining on his contract is good business.

So, all in all, I feel it’s been a decent window of ins and outs for Liverpool, but far from spectacular. I probably expected a little more myself, but not as much as some it would seem. However, with a month of the window remaining, we are probably not finished just yet and without any marquee signings to really get fans excited, Klopp will need to get his team clicking early if the mood is not to darken. My own opinion is that this summer is part one of a squad overhaul, with part two to come next year as Jürgen Klopp builds his own squad to challenge for trophies.