Liverpool travel to the Emirates Stadium to face Arsenal on Sunday, as their 2016/17 Premier League season finally gets underway, 88 days after last season ended with the Europa League final defeat to Sevilla. 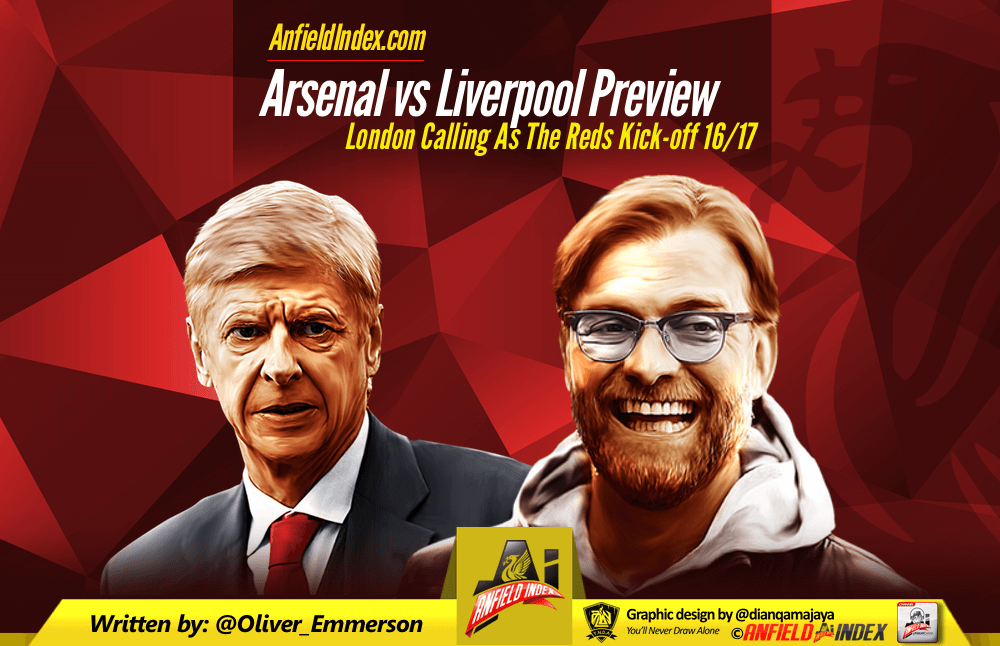 Much has changed since then, not least in terms of transfers, with Jürgen Klopp seeing a huge overhaul in terms of personnel, and even staff, at the club. The likes of Martin Skrtel, Jordon Ibe and Joe Allen are no longer Liverpool players, with names such as Sadio Mane, Georginio Wijnaldum and Ragnar Klavan ready to enter their first season as Liverpool players.

Of course, we’ve seen these signings already in a Liverpool shirt, during pre-season. Rounding things up quickly, the Reds began with four easy wins in the North West, before flying out to America for the second leg of their pre-season tour. There was one win and two defeats in America, before Liverpool returned to Europe for their most convincing pre-season display, a 4-0 win over giants FC Barcelona at Wembley. They lost to Mainz by the same score-line the next day, but it mattered little given the amount of youth players on display.

There has been business for Sunday’s rivals too, although not as much as the fans want, or even demand at this point. They got it done early, bringing Granit Xhaka in from the Bundesliga for a £30million fee.

Arsenal’s pre-season has been slightly less flashy than Liverpool’s, with no extravagant tour. The Gunners have won four games in a row after drawing their opening friendly 1-1 to Lens, the last of which being a 3-2 victory over fellow Premier League side Manchester City.

Liverpool’s well-documented injury list continues to trouble them going into the weekend’s game, with Daniel Sturridge and James Milner the latest to suffer knock’s, leaving both unlikely to start on Sunday, whether or not they’ll make the bench is unclear. Sturridge did return to training on Wednesday, as did Marko Grujic.

Joe Gomez is a long term absentee, whilst Sheyi Ojo has picked up an injury in the past week. Simon Mignolet will start in goal due to Loris Karius’ broken hand, whilst Mamadou Sakho remains sidelined with an Achilles injury. Joel Matip is likely to be in the squad, but the fitter pair of Dejan Lovren and Ragnar Klavan look more likely to line up at the heart of the defence. Lucas Leiva is out of contention through injury, but will still be at the club on Sunday after a move to Galatasaray broke down.

Further forward, and Emre Can looks set to be flanked by two of Georginio Wijnaldum, Jordan Henderson/Adam Lallana in the midfield three, with Mane, Coutinho and Firmino making for an exciting attack, Divock Origi set for a role off the bench in the second half.

Arsenal have injury concerns themselves, with Per Mertesacker and Gabriel both out in defence, whilst Arsene Wenger has said that Laurent Koscielny, Mesut Ozil and Olivier Giroud won’t feature as they aren’t match fit after returning late due to Euro 2016. Due to this, it’s going to be a makeshift defence, whilst Xhaka should make his competitive debut.

These two sides last met at Anfield back in January this year, contesting one of the most thrilling games between them in recent years. Whilst it was a game to remember for many reasons, many recall it as the night Roberto Firmino truly announced himself to the Premier League.

He swivelled and beat Petr Cech at his near post, with his weak foot, after just 10 minutes, restoring Liverpool’s lead with a curling effort from 20 yards after some slack goalkeeping from Mignolet had allowed Ramsey to level things up.

Arsenal would go on to level again, and then take the lead, thanks to a Giroud brace, only for Joe Allen to lash in a 90th minute equaliser, sending a snow-swept Anfield crowd into delirium.

Liverpool have won their last three opening weekend fixtures, having not won any of the previous four.

Arsenal have won their last two opening weekend fixtures, having also not won any of the four before that.

The last five Premier League games between these two teams have seen 21 goals, at an average of 4.1 per game. The PL average last season was 2.7.

Daniel Sturridge has scored the winner on the opening day in two of the last three years for Liverpool.