What a start! What a start! An absolutely rousing display from the Reds at the Emirates Stadium left Arsenal shell-shocked and saw Jürgen Klopp’s men complete a brilliant comeback after falling behind to a Theo Walcott goal and generally being shoddy in all aspects in the first half. 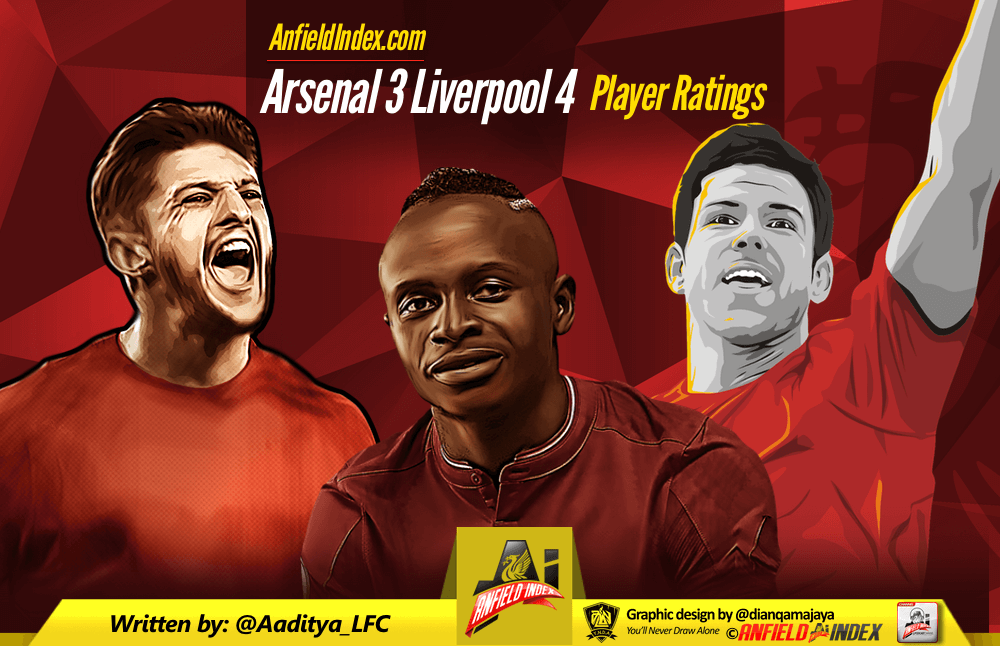 Here is how I thought each of the players fared.

Mignolet started another season for Liverpool with a penalty save and looking far more confident than he has in a very long time. He did have a few nervy moments, but they were few and far between in what was largely a very encouraging performance.

We have now gotten used to seeing this from Clyne. He put in a solid shift, galloping up and down the right flank incessantly. He provided excellent support to the outstanding Sadio Mané. Got himself an assist as well.

A very shaky start for the big Croatian. He looked nervous right from the start, where he skewed a couple of routine clearances. In the end, he was also responsible for Arsenal’s third goal as he let Calum Chambers off unmarked.

The big Estonian could well be on his way to fan-favourite status. It was an absolutely outstanding performance from Klavan, who was sound in terms of his positioning and aerial ability. He also looked very calm and assured in possession.

He got a zero for his first-half performance. He conceded a needless penalty, was caught out of position for Walcott’s opener and generally looked a bundle of nerves. Credit to him for showing a semblance of improvement in the second half.

A make-or-break season for the skipper started off pretty well as he put in a display like the Henderson we have come to know. Energetic, a bundle of aggression and also today, very neat passing. Encouraging signs for the captain ahead of a huge season.

He was anonymous in the first half as we got penned into our own half, and struggled to make an impact on the game. But after the break, he seemed to play with a lot more freedom, and the energy he showed in the second half bodes well.

He did what he usually does, but this time he got some end-product too with a well-taken goal. He was partly at fault for Arsenal’s first goal, however, as he gave the ball away cheaply.

What a debut for the man from Senegal! He ran Arsenal absolutely ragged and even when we were that disappointing in the first half, he looked like the only one who could make something happen.

This boy is a man for the big occasion! The number of goals he has in crunch games is proof of that. He didn’t have too bright a game overall, but sprung to life with a dream free-kick late in the first half that set the wheels in motion for us.

By the high standards he set for himself in the second half of last season, he had a quiet game. But he was effective, pressed really well and showed a lot of promising link-up play with Mané.

He made a shaky start after coming on, affording Cazorla far too much space, but in the last fifteen minutes, he stepped it up and ensured we didn’t concede that equaliser.

He continues to show a lot of promise. He will definitely be a hugely important part of Klopp’s plans this season.

Too little time to make an impression.