Jurgen Klopp’s pressing style of play and high-attacking philosophy can leave Liverpool’s full-back in a vulnerable position if the whole team does not execute the strategy perfectly.

Alberto Moreno has come under huge criticism recently due to a string of mistakes in Liverpool’s opening fixture against Arsenal, following on from a number of poor performances last season. It’s fair to say the left-back has been inconsistent in his displays and has made a number of errors which have put the Reds in bad positions but the blame on the young defender for goals conceded isn’t entirely fair. 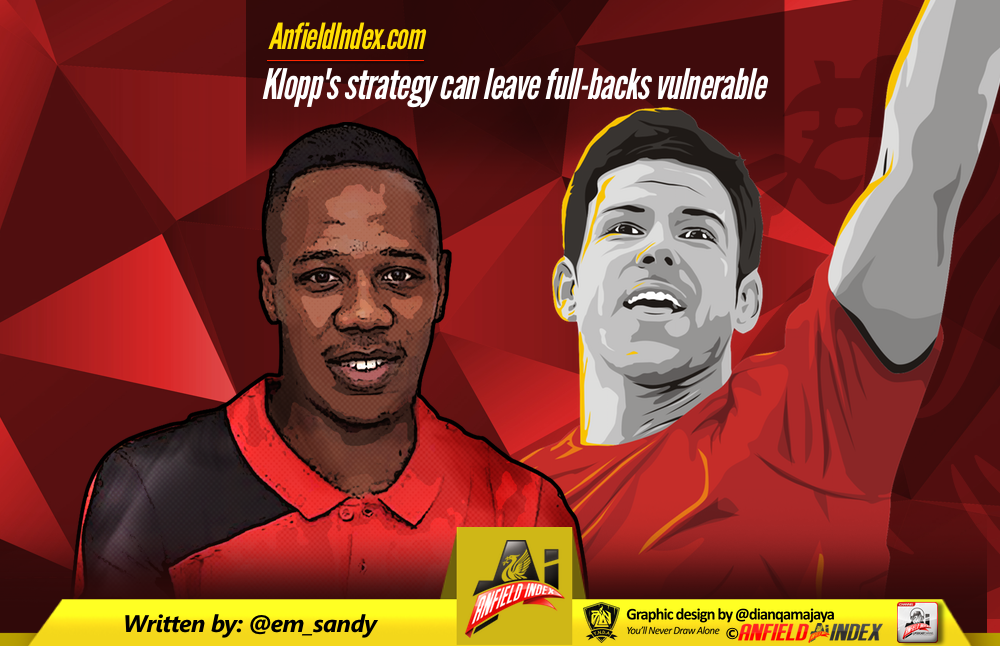 It’s important to first address the style of play and philosophy Jurgen Klopp has brought to Anfield. He demands high intensity and the ‘Gegen-pressing’ strategy where his players push high up the field, squeeze out the space for the opposition and try to break down their possession. When Liverpool are in possession of their own, he expects his players to automatically switch mentality to that of an attacker, no matter what position on the pitch you hold. Therefore, if Liverpool have possession in the defensive third, Klopp expects them to maintain possession and look for the next form of attack.

This system proved highly effective at Borussia Dortmund and played to the strengths of the players available. Marco Rues and Pierre-Emerick Aubameyang have bags of pace and they played a dynamic role within the system at Dortmund. When the German side regained possession, the fast-paced attackers were quick to move into space, make runs in behind the defenders and were extremely effective on the high-pressing counter attack. Similar players are available for Klopp at Liverpool. Daniel Sturridge, Divock Origi and Sadio Mane have the ability to make dynamic runs out wide, behind the defence and through the middle and each of them have great pace. Origi in particular plays in a similar style to Reus and the Belgian winger has already proved he works well under Klopp and in a system, which when firing on all fronts, benefits him greatly.

The system relies almost entirely on the collective movement of the team though. As a unit, each player on the pitch must move in the same direction and fill the gaps on the pitch to avoid mistakes. If one player, or a group of players are even slightly out of position, the system fails defensively and can leave gaps across the back which can be exploited. This has already been shown in Liverpool’s opening games.

As Liverpool’s attacking three, behind the main striker, push forward to press the ball, the midfield also moves up and so should the defence. If there’s too much of a gap left between the three lines, there’s space for the opposition to exploit should they regain possession and try to build a counter-attack. This in turn can lead to out-numbering and defenders appear to be out of position. A three on two situation is more likely to occur through the middle if the full-backs have pushed up too high.

Whilst Moreno was at fault for one, if not more of Arsenal’s goals in Liverpool’s opening game of the season, it was also down to the lack of protection from the units in front of the defence. When Liverpool regained possession, Moreno made an automatic move forward, naturally leaving space behind him on the flank. The midfield in turn should spread out to the wings, providing cover for the full-back if they have advanced and one of the central players should drop slightly deeper to provide a pivot piece in front of the two centre-backs. Emre Can’s absence was felt greatly against Arsenal, as it was clear Liverpool’s need for a defensive midfielder is growing. The German would be the anchorman in midfield to provide the pivot piece and drop slightly deeper in order to maintain organisation and shape for Liverpool when in possession of the ball.

Klopp’s strategy is a good one and that’s been proven in the Bundesliga on several occasions. It’s a style of football that has been successful at European level too and so far at Liverpool, there’s been flashes of sporadic brilliance. The Reds have the capability to carry out his instructions well and have demonstrated this, as they did in the opening 60 minutes against Arsenal. But in order for it to become effective in the long-term, Liverpool need to gain consistency and must perfect their positioning. Otherwise, the Reds’ full-backs will continue to be exposed and Liverpool’s weaknesses in defence will be left vulnerable and open.