We were asked a question on our twitter account; Which player is passed the ball the most?

It was a question we couldn’t answer as we didn’t hold these stats. After some analysis and searching we’ve found some of the answers thanks to the Guardian.co.uk’s excellent Chalkboard service which is run by Opta Data (just like Anfield Index’s Stats Centre).

We’ve covered the last three Liverpool matches, it took long enough to analyse these so doing a whole season for this article would have taken a while.

So, what have we learnt? The table below shows the results of our analysis from the Arsenal game. Note that we’ve only covered five players from midfield and attack in this analysis and not covered the defenders as there was a high number of passes between the back four. The midfielders and attackers should show better results. Also the request for this article was particular to these players. 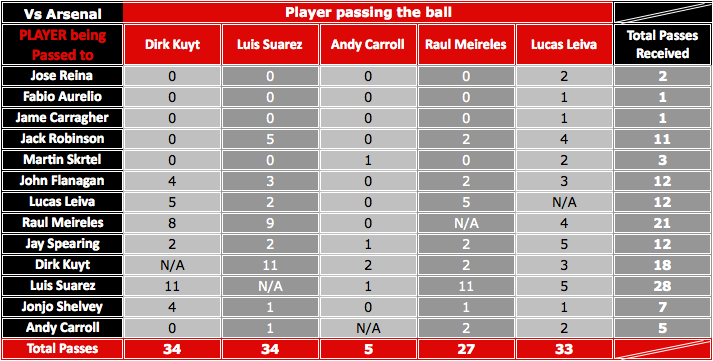 Looking at the table, above, you can see that Luis Suarez was the the player that was most passed to with him receiving 28 passes from Kuyt, Carroll, Meireles and Lucas. Even more astonishing is that Lucas and Carroll only made 6 of these passes so Meireles and Kuyt made the majority of passes to Luis. This shows how they seem to have formed a good understanding on the pitch. Meireles, Kuyt & Suarez have been key to our resurgence in the latter half of the season. Meireles provided that early push with a great goalscoring run, the Suarez was showing his magic with assists etc and now Kuyt is really proving a lot of people wrong with goals and assists.

Raul Meireles and Dirk Kuyt were the next two players in line that received the most passes. The central midfielders were passed the same amount of the ball from the forward players and the fullbacks also had similar numbers away to Arsenal. So as expected most if not all of the ball, up top, was going through Kuyt, Meireles and Suarez. They had a decent game 2nd half and the finish was the best moment of the game when Liverpool received a penalty so late into stoppage time.

Andy Carroll had a poor game against Arsenal and this is show in the fact that he only made 5 passes to midfield or attacking players. He also only received 5 too.There is plenty of improvement to be made by Andy but his start hasn’t been bad at all apart from the odd injury picked up. 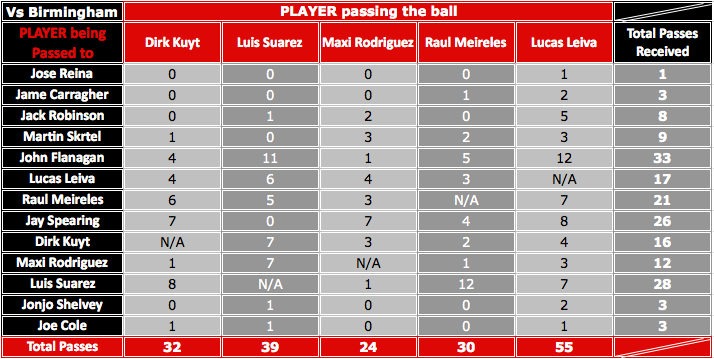 The next game shown, above, is the Birmingham City game at Anfield. In this game there was a surprise as young John Flanagan found himself most passed to in this game. A great achievement for the young lad who looked for the ball at every opportunity and his colleagues showed no hesitation in giving him the ball. That’s a great compliment in itself. Flanagan received the majority of his passes from Suarez and Lucas Leiva (23 out of 33). This shows how much Luis Suarez is movingto the flanks as Flanagan is very disciplined to the right hand side, therefore this is an indication of how much Suarez drifts wide.

Luis Suarez was next most passed (Raul Meireles delivering 12 out of 28 passes to him) to followed by Jay Spearing who received 26 passes from the midfielders /forwards in the game. The usual suspects of Raul Meireles, Lucas Leiva and Dirk Kuyt were all next on the list of players most passed to. Remember these passes are from the five players in the list only, this does not include passes from defenders as I’m sure Flanagan would have received quite a few from his fellow defenders.

Out of the players listed Lucas Leiva made the most successful passes for the game Vs Birmingham. Luis Suarez was next on the list with 39 passes. A high amount fora striker which shows that he’s, very much, involved in the game unlike Torres who, in his last 18 months at the club, spent most of his time moping and static. Suarez is more Tevez like, looking for space and asking for the ball at all times. 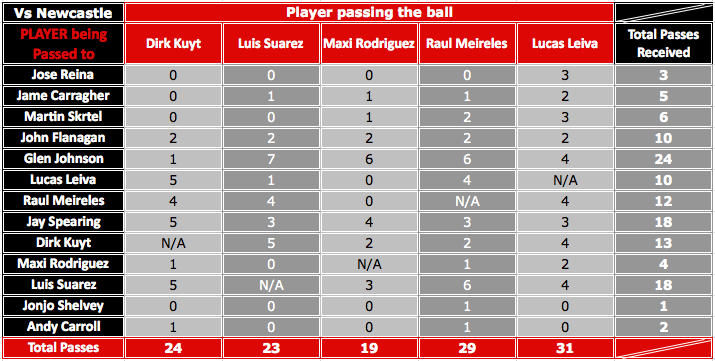 The final game that we looked at was the Newcastle game. We can immediately observe that there were less passes in this game than the previous one. Newcastle kept the ball well and edged the ball possession statistics which was only the second time, first was Aston Villa on the 6th December 2010, that a visiting team outside of the top four had majority possession in a game at Anfield this season.

Once again it was a full back at Anfield that received the most passes from the five midfielders / forwards chosen. This time it was the returning Glen Johnson that received the most passes. Looking at our AI Stats Centre, Glen also made the most passes in this game so he was involved a lot especially as he switched flanks at half time too as Flanagan was having a few problems on the right. Luis Suarez and Jay Spearing were next in number of received passes. Both receiving 18 passes and these passes were shared out between the five players.

So there were not many patterns developing in the Newcastle game which was quite frustrating to watch (apart from the goals) as Liverpool couldn’t get the ball off of Newcastle and had to with stand a lot of pressure from corners and free kicks around the area. At times I thought I was watching the old Wimbledon again because Newcastle really did depend on their set pieces against Liverpool on Sunday.

Looking at all three games there was one pattern that was interesting. The fact that Lucas passed to every other player that started each game is quite an achievement and he’s the only one to do it out of the players covered. If you look at all three tables Lucas made at least one pass to every single player that was in the starting XI for Liverpool. Another statistic to show that he’s becoming the fulcrum and that he’s starting to distribute the ball for Liverpool and making sure he’s getting everyone involved in the game.

So who did they pass the ball most to in the three games? Let’s have a quick look at that. 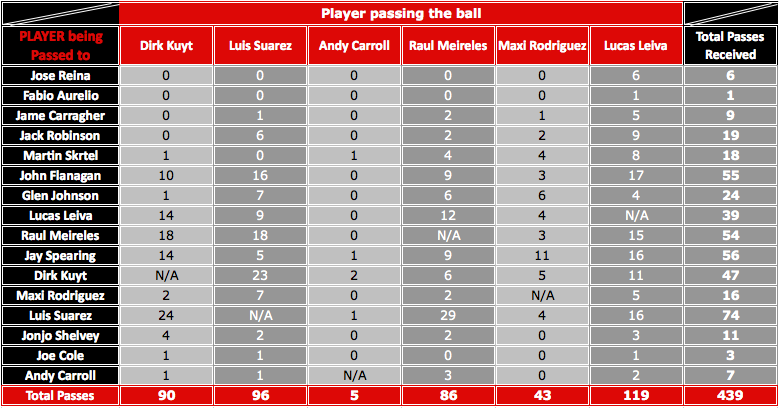 Summary of all three matches covered

Luis Suarez has been the player that the players covered in this article have passed to the most in the last three matches. Luis has received 74 passes from his team mates. Surprisingly, Jay Spearing was then next in the list with 56 passes received. A greater shock is received when you see that John Flanagan comes third with 55 passes. So our strikers and midfielders are passing to young Flano regularly and this is a compliment to the newcomer as he’s continuously making himself available for the ball. Meireles and Kuyt are next in the list and you’d expect these players to be high up the list.

Here’s a list of the players we’ve covered and who they’ve passed to most:

The majority of Dirk Kuyt’s passes are to Luis Suarez and Raul Meireles, as expected. Partnering Suarez upfront or playing on the right enables Kuyt to also link with Meireles, Lucas and Spearing as we can see from the statistics Kuyt has also passed to Flanagan on 10 occasions. This is most likely to be when he drifts to the right hand side as it has been his natural position since Rafa Benitez converted him to a wide player.

Luis Suarez linked up with Dirk Kuyt and Raul Meireles the most. He also passed the ball to John Flanagan with the majority of these passes coming in the Birmingham City game at Anfield. With Suarez running the channels it’s likely he’ll go down the right hand side and link with Flano and the stats clearly show this is the case as Flanagan is quite a disciplined player and holds his position unless covered.

The majority of Raul Meireles’s passes are to Luis Suarez. It takes a combination of the next three players’ total on the list combining to beat the total of passes made to Luis. Raul also seems to link well with the central midfielders as Raul has a tendency to cut inside when played on the left as he has been doing. Plenty of passes to full backs to as he is played wide the majority of the time.

Maxi’s passes are mainly to Spearing who is most likely to be square to him or behind him. When Maxi is in the side he’ll keep the ball by turning back and passing it to the nearest available player. Maxi’s pass stats are the lowest of the players covered. Throughout the season he’s the player who’s had the least passes in the matches he plays although the passes he does make are at a very high pass completion percentage.

Look at the statistics above; it’s nice to see Flanagan appear on the lists regularly and they also show that Kuyt, Meireles and Suarez are passing to each other regularly and maybe this has been they key to Liverpool’s success in the latter stages this season?

We’ll leave you with a summary of the passes received by each player in the three matches covered. 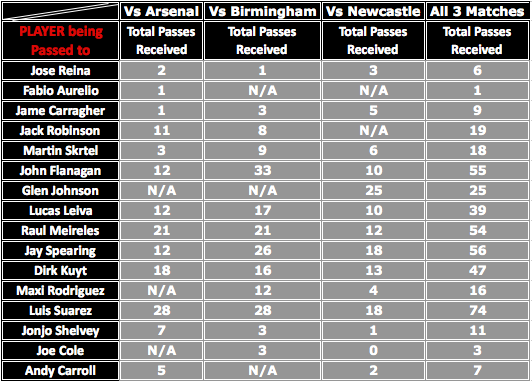 Summary of passes received by players by match