It’s the first game of the season. Away to Arsenal. Liverpool have a terrible record at the Emirates. Just one win in eight attempts in the league since Arsenal moved from Highbury. But this isn’t any old Liverpool. This is Jurgen Klopp’s Liverpool. And Liverpool completely wipe the floor with Arsenal. Over the space of 20 breath taking second half minutes, Liverpool go 4-1 up. Arsenal can’t deal with us. In the second half, Mane is Messi. Coutinho runs the show. Liverpool take their foot off the gas and hold on to win 4-3 but there is no doubt about it. Liverpool played arsenal off the park on their own ground for the first time in recent memory. We’re gonna win the league. 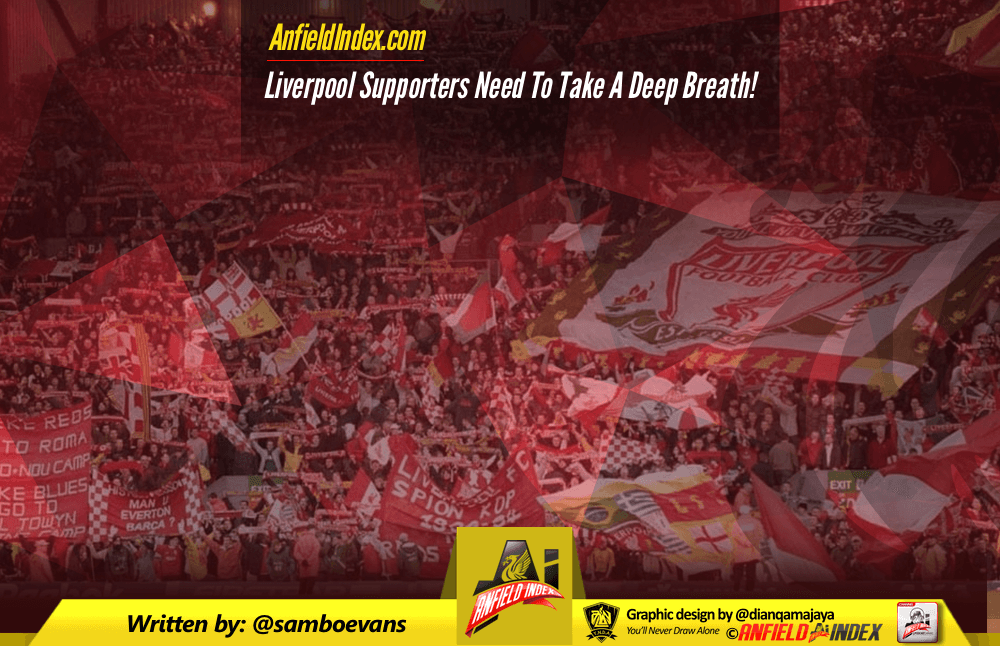 Fast forward 6 days and the champions elect travel to Burnley for what will be a straightforward victory over the newly promoted minnows. And then BANG. Liverpool come up against their old enemy. A parked bus. Yet again, Liverpool can’t find a way to shift that bus. The bus has its hand brake on and the doors are locked. Liverpool aren’t shifting that bus. To make matters worse, they get sucker punched not once but twice on the counter attack. Liverpool lose 2-0 to a newly promoted side and in the space of 90 minutes Liverpool have gone from title challengers to also rans. The sky has fallen. We. Are. Crap.

I must admit that I completely lost my shit in the immediate aftermath of the Burnley defeat. I am the fan equivalent of a manager being interviewed seconds after losing a match. Twitter is my microphone and I rant. As did many other Liverpool fans on twitter. An overwhelming feeling of deja-vu washed over me. The elation of the scintillating victory over Arsenal was followed up by the abysmal 2-0 reverse away to Burnley. Not again?

Losing to newly promoted sides is a very familiar story for Liverpool. I remember a very similar situation at the start of the 1999/00 season. Liverpool started the season with a 2-1 away win against Sheffield Wednesday only to follow it up with a 1-0 defeat to newly promoted Watford at Anfield. That defeat is so deeply engrained in my brain that I even remember the goalscorer for Watford was Tommy Mooney. Tommy bloody Mooney. Metaphorically pulling a mooney at the “mighty” LFC in their own back yard.

17 years down the line and we are still having the same problems.

Now that the dust has settled after my usual twitter meltdown, I’ve had time to evaluate and put a bit of perspective on the situation.

First of all I must point out that LFC had an incredible 80% possession in the match and had a ridiculous 26 shots with no goals scored. Burnley had 3 shots and scored 2 goals. 2 exceptional finishes from Sam Vokes and Andre Gray. Burnley won’t finish that well again all season.

Another mitigating factor was the untimely injury to Mane. Despite only having played one league game so far, Mane was a huge miss for the Burnley game. He showed against Arsenal how important he can be to Liverpool’s attacking play. He has the inventiveness and blistering pace required to unlock stubborn defences. He has the keys to move that parked bus.

90% of the time, if Burnley park the bus like that, the best result they can hope for is a 0-0 draw. This match was that 1 in 10 shot where they manage to nick a goal or two on the break. Liverpool didn’t get played off the park. They made simple defensive errors. The early goal is key and it leaves Liverpool chasing the game right from the start and unfortunately the reds lost their composure. That composure will come with time.

I find it absolutely batshit crazy that LFC fans (myself included in the heat of the moment) can go from “We are going to win the league” to “Sell the whole squad, we need to sign 46 new players” in the space of one measly result. This is what the pressure of no League title in 26 years can do to both the fans and the players. We panic. Lets not panic this year. Let’s see where the season takes us. The season is 38 games long. We are 2 games in.

The problem that LFC face that very few teams have to face is that their huge reputation precedes them. LFC need to accept that the majority of the bottom 10 in the league are going to park the bus against the mighty Liverpool FC. Despite not winning the league in 26 years, Liverpool are still considered one of the giants of the English game. The world game. That’s why opposition teams are always going to up their game against us and are always more likely to park the bus because they are playing against a “big” club. The advantage Leicester enjoyed last year is that very few teams were going to park the bus against them because they aren’t considered one of the giants of the league. And Leicester capitalised on that magnificently.

If we look at the first two matches of the season as a whole, you could argue that Liverpool have only played well for about 30 minutes of the first 180 minutes of the season. That’s a worry. But it’s a very small sample size. I would urge you to remember that many great teams over the years have been prone to starting the season poorly and gone on to great things. Man United under Ferguson had many seasons where they started the season poorly, only to go on to romp to the title. Arsenal seem to be making a habit of early season defeats yet haven’t failed to qualify for the Champions League since Wenger took over. And despite my desperation for Liverpool to win the League, I think that coming in the top four would be a good achievement this season. That is still a very achievable goal.

But I haven’t given up Liverpool on winning the league just yet. And neither should you. In his very first season, Jurgen Klopp managed to take an injury-ravaged Liverpool to a European Cup final for the first time since 2007 with someone else’s squad. Just imagine what Klopp will be able to do this season now that he has signed a few of his own players. And with no European football this year, Klopp can make the league his primary focus.

The Burnley defeat left a bad taste in the mouth. So Tuesday night’s 5-0 demolition of Burton has acted as a timely palate cleanser prior to the away trip to White Hart Lane on Saturday. Mane again showed how influential he can be with a man of the match performance. Liverpool tore Championship side Burton apart with an excellent attacking display to blow away the Burnley cobwebs. More signs that Liverpool might be an irresistible attacking force this season. People will point out that it was only Burton, but winning 5-0 has acted as a timely reminder of how to put the ball in the back of the net prior to the Spurs game.

With tough away trips to White Hart Lane and Stamford bridge around the corner, things might get worse before they get better. If they do, don’t panic. Remember that this is a marathon and not a sprint. We must remember that the league is different to a cup competition. You can come back from a defeat. It’s what you do in the next match that really counts. It’s the wins against the teams parking the bus that will get us up the league. So calm your tits. Klopp is trying to build something here and I’m strapped in and ready to watch his masterpiece come together. I have full faith that under his guidance and given enough time, Liverpool now have the ammunition required to not only move that parked bus, but blow it to pieces.