The demons of the Burnley defeat are still around, but Liverpool did well in avoiding a potential banana skin in the EFL Cup against Burton with a resounding win. It gets a lot tougher for the Reds over the weekend, with a visit to White Hart Lane, a ground on which we’ve seen some crazy highs and crushing lows.

Spurs have made a sluggish start to the season, opening with a draw against Everton and an unconvincing win against Palace, where they had most of the play but failed to take the tons of chances that they created.

For Liverpool, it is about getting back on track in the league after the disappointing performance at Turf Moor, which  followed the exhilarating win against Arsenal. 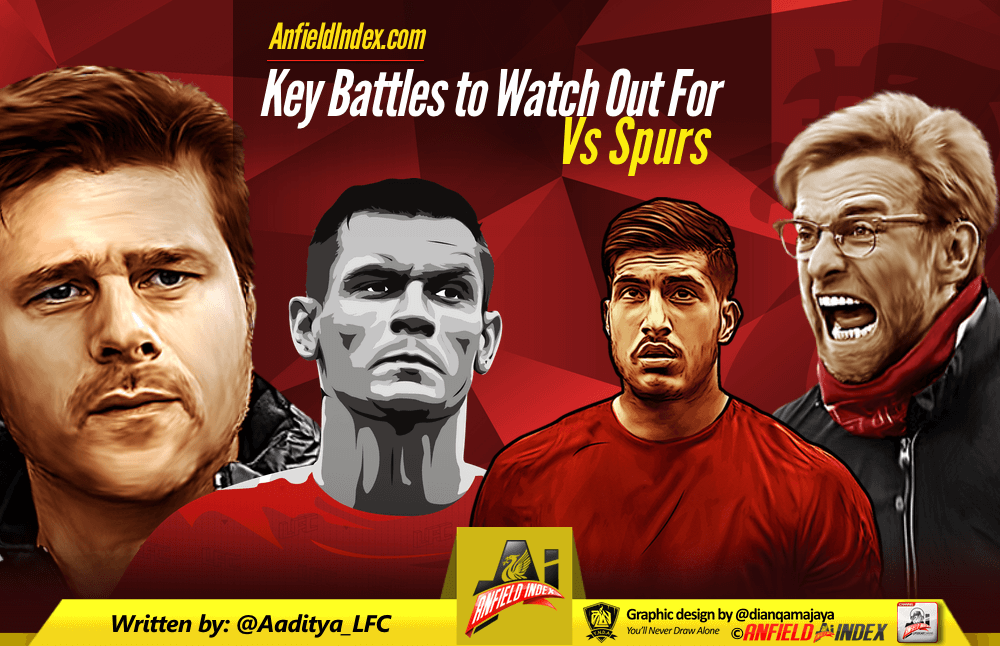 Here are some individual battles that could be key in deciding the ultimate outcome.

Kane hasn’t scored yet in the league. And whoever partners him, Joel Matip or Ragnar Klavan, Lovren is expected to be the leader of our back line (How I struggled to type that!). Lovren has been a victim of Kane’s clinical finishing already, in April, when he was having a quiet game only to end up scoring Spurs’ equalizer after turning Lovren inside out. With Vincent Janssen still adjusting to the Premier League, Kane has to bear the bulk of the goal-scoring responsibility. For Lovren and the Liverpool defense, it has been a woeful start as we have conceded five goals in our two Premier League games so far. It is important with the way that we play our attacking football the centre-backs can stand tall, and Lovren will have a huge role to play against Spurs.

Nathaniel Clyne, defensively, has had an awkward start to the season. He was skinned by Oxlade-Chamberlain for Arsenal’s second goal and played a woeful pass which led to Burnley’s opener on Saturday. There has been enough talk about our left-back and whether it is James Milner or Alberto Moreno who plays there, that person is going to be under huge scrutiny. And in that kind of situation, Eriksen and Lamela aren’t the kind of wide players one would want to face. Eriksen’s vision and close control along with Lamela’s pace and trickery could pose all kinds of problems. Lamela has already been among the goals, scoring Spurs’ equalizer against Everton in their opening game.

After a superb performance in the opening game against Arsenal, Coutinho had a frustrating game against Burnley. With the Clarets sitting on the edge of the area, the little magician was limited to taking shots from distance, which were ultimately of no good. As for Mane, he has been the standout player in both the competitive games that he has played this season. It wouldn’t be stretching it to say that Coutinho and Mane will have to come good consistently if Liverpool are to have any sort of success this season. As for Walker and Rose, they have to remain consistent and keep showing the form that made them England’s first choice full-backs at the recently concluded Euros.

If Emre Can does not recover, the responsibility in midfield will once again fall to Jordan Henderson and Gini Wijnaldum, who both had stinkers against Burnley. For Spurs, they have a solid core in Eric Dier and Victor Wanyama, who is on a high after scoring the winner against Palace on his White Hart Lane debut. It is a huge game for Liverpool’s captain and the new big-money signing, as Liverpool look to end a run of four consecutive away games with success against a team we’re likely to be competing for spots against.