As with most things, I’d like to begin with referencing Marcel Proust. I suppose we all do it. His epic ‘Remembrance of Things Past’ begins with the narrator nibbling away at a piece of madeleine cake he’d dunked in his tea. The taste fires a maelstrom of nostalgia and before too long  he’s reeling off incident which occurred in his youth. He goes on to tell the story for seven volumes and thousands of pages. Strong stuff that madeleine cake.

I mention this b ecause yesterday’s game at Burton Albion had my synapses firing all over the place too. As I stood in the 7,000 capacity stadium, thoughts, memories and emotions came flooding back. Mine didn’t involve cake nor the local brew – Reservoir – but of watching Liverpool on a terrace rather than sitting down with people enjoying themselves rather than wracked with tension.

This could not have happened had the game been a home game. 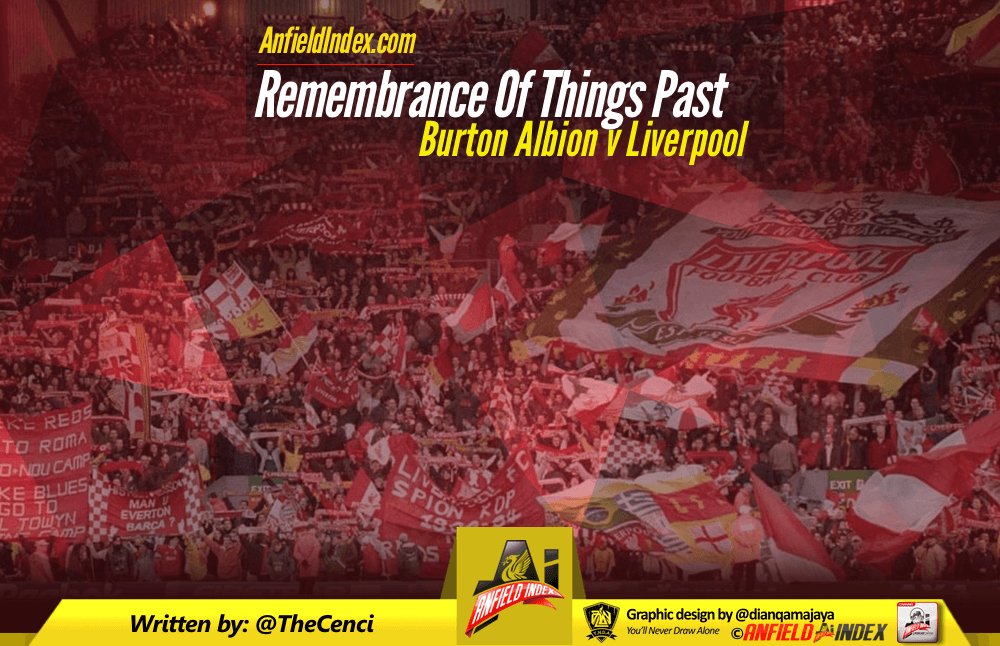 For many people away games will always be better. Anfield is nothing like it’s supposed and purported to be and it’s only on the rare European occasions that it can live up to its billing. Oh, we make a bold stab at an atmosphere for ten minutes but half an hour in you can hear the sound of the seagulls in the distance. Last season I heard James Milner berate a linesman from my seat in Row 18 of the Kop.

Of course, Anfield in full voice is something to behold. On good nights even the Main Stand (and it will always be called the Main Stand even if its title is auctioned off. I still call the Centenary ‘the Kemlyn’ 24 years after it was built) sings. This is such a rare occurrence that on one night the Kop went quiet to listen to them – such was the measure of disbelief that the old curmudgeons had joined in.

Away games are much different. The atmosphere is much more jubilant or moody depending on the strength of the opposition and there’s less of a feeling that you’re just going to stare at an oblong strip of turf for a couple of hours. Away games are statements. You’re walking into another city and singing the name of ours. You’re making your presence known. Ours will be the first song heard on the terrace just as ours will usually be the loudest. Anfield may occasionally resemble a library but away games are much more raucous.

There are reasons for this. Firstly, there are more younger people prepared to travel to see the Reds. A recent study claimed that the average age for a Kopite is somewhere in the mid-forties, which reflects my own demographic. The away fan tends to be younger and travelling with mates. They also leave their own seats and stand with their mates. The Premier League would obviously frown upon this but that coalescing of young Scouse voices does help with singing and building an atmosphere. That can even make an away game at Stoke – where it’s always cold – palatable.

Last night was an example of this, but it had something else too

What a difference that makes.

Of course, we stand for big games too but this time there was no seat in front to bark your shins on when something exciting happened. This time we could stand like the old days.  They let us.

The majority of the Pirelli Stadium is terraced with only a handful of seated areas on the sides of the ground. It’s also made up of single tier stands which means that, if you’re at the back of the stand as we were last night, you can be on the street outside mere seconds after the final whistle. No queuing to  get to the aisles or edging down the criss-cross of stairs. Straight out.

I love small grounds. In 2008 I was lucky enough to be involved in a 92 club tour of the UK with two mates. It took us nine days and I advise you never, ever, to try it. You lose your reason by Day 3. Anyway, we came across lots of new builds such as St Mary’s, Pride Park, the Riverside etc., and they all looked the same after a while. Only the colour of the paint on the obligatory spiders legs above the roofing was different. Identikit stadia. No, it was the old wooden grounds that we liked. Brunton Park, Carlisle  – which floods routinely, Spotland, Rochdale with an enormous  puddle in the centre circle and Gigg Lane, Bury which had taken down the goal posts to  be painted. Give me those grounds any day – not the giant cinema that is the Emirates.

The Pirelli Stadium is evocative of that age. It may be a new ground but it’s growing rather than complete. The terracing adds to its charm and there wasn’t one frown from anyone I knew when we were told that there was no seating. The advantages are obvious. For one night only we could stand with whom we liked and where we liked. You could shout to your mate five feet away rather than having to text him. You could even talk to a steward without having him/her shout at you for standing. It makes for a happier stand as it’s more social than isolating people by having them dotted around the stand.

This triggered something in the crowd too as, for once; there was an airing of the old songs. A Liverbird on my Chest made it to three of its eleven verse (unheard of in a ground) and Poor Scouser Tommy was sang at its correct slow, almost glacial, pace rather than the race-to-the-finish version we hear at Anfield. Full marks to  the man on his own near me who sang a solo song about former 1970s Everton manager to the tune of ‘I’ve Got A Lovely Bunch of Coconuts’ but changing the last two lines to  ‘dozy cunts’. That got a big laugh.

The football helped obviously and two early goals always make games like that irrelevant after a while. The celebrations were not wild but greeted with a cheer.  There was even a bit of player engagement when Sturridge larruped the ball out of the ground while going for his hatrick. The ‘what the fucking hell was that?’ from behind the goal was a joke though Sturridge didn’t acknowledge it or, indeed, the crowd all night.  Hmm…

Most of all though the night was a laugh. I wouldn’t have been heartbroken had we gone out as I’d like a full assault on the Premier League this season rather than the distraction of the Cups so, for me, it was just another away ground ticked off, a relatively cheap game, a local brew and a chat with mates old and new. That’s what games should be about anyway. They’re social occasions and meant to be pleasant. It reminded me of watching Liverpool when 5-0 wins were monthly events and you could stand with your mates without the need of constant stewarding and policing. There was the odd moment when I realised why we wanted to do this in the first place.  Match going can become a habit then a chore but last night was something we should search for – enjoyable and entertaining times. Not the white knuckle tension of most campaigns.

Anyway, we won and I liked Joel Matip even though he had nothing to do.

I’m off for some madeleine cake to see what else I can remember about my twenties.