First things first, I know it was only Burton Albion, I know they’re currently sat 18th in the Championship and I know they’ve conceded nine goals in just the four league games this season. I’m by no means implying, announcing or suggesting that Liverpool going to win the league because of how easy it was for the Reds to defeat the Championship new-boys.  The scoreline wasn’t, isn’t and never will be the most important part when analysing a game like this. Much like the pre-season matches it’s more to do with the performance. It’s about the players finding a rhythm and executing the style the manager wants and against Burton they did just that.

Emre Can has been credited with the turnaround in midfield. His proactive approach seemed to drive Liverpool forward and he was able to break the Burton lines with his passing from deeper areas. It’s certainly something Liverpool have lacked in their opening two Premier League matches as they’ve toiled in midfield and really struggled to create from deep. 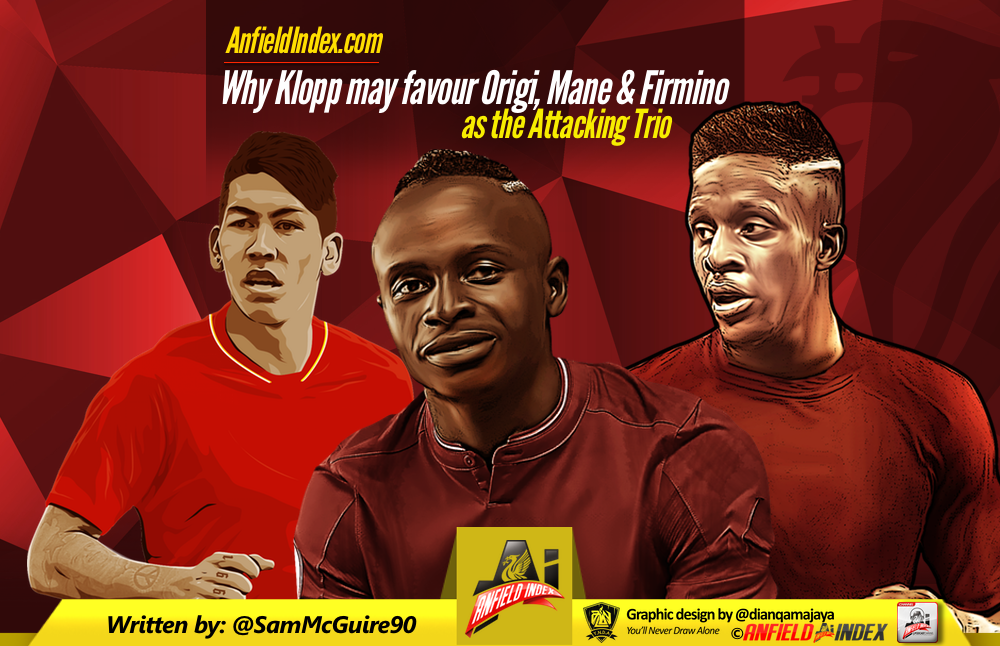 Sadio Mane is the man getting all the plaudits from an attacking viewpoint as the Senegalese attacker put in a third consecutive man of the match performance. His movement, directness and decisiveness was missed in the defeat to Burnley. as Liverpool looked a little pedestrian in attack. However, it was his partnership with Divock Origi and Roberto Firmino that really caught the eye.

It seemed to be a perfect blend of pace, power, a goal threat and creativity.

The dynamic in attack hasn’t been that fluid since the days of Sturridge, Suarez and Sterling. It was just a blur of red and Burton didn’t know whether to come or go. Origi was popping up in both channels, Firmino was dropping deep to start the play before getting ahead of Origi centrally and Mane was just everywhere.

Once again, I know It was only Burton but this looked like a well balanced attacking unit.

Liverpool fans have become accustomed to seeing Philippe Coutinho play on the left side of the attack since Jurgen Klopp was appointed as manager. Many fans clamoured for the talented Brazilian to be used in a withdrawn position due to his ability to dictate games and open up teams with his perfectly executed passes. Klopp knows best though and Liverpool’s no.10 had his most prolific season in terms of goals under the German.

Despite this productive season It’s widely acknowledged that Coutinho isn’t a killer in terms of being a natural goal scorer. He’s not developed that part of his game yet and although when he does get into the area he has no problem putting the ball away it’s getting into the area that’s a problem. It’s not his natural game and it’s telling.

He does score goals but Firmino highlighted just how much of a goal threat the left sided attacker could be in a Klopp system as at times he was almost partnering Divock Origi.

The gif above shows the Liverpool opener. Superb work from Mane and a calm finish from Origi but just watch Firmino’s movement. He’s got that goal scorers instinct as he goes hunting for the simple finish inside of the six yard box. Had Origi missed the ball Firmino had a tap in. When was the last time Coutinho did that? It’s not often fans witness him so centrally.

Of course Klopp may have instructed Firmino to be a lot more direct but it seemed so natural having him play that role.

The next gif shows Firmino’s goal. You could almost say he’s getting in the way of Origi but that desire and hunger to get on the end of a cross despite not being the striker is encouraging to see. He doesn’t move to the back post like some wide attackers would do in that situation. 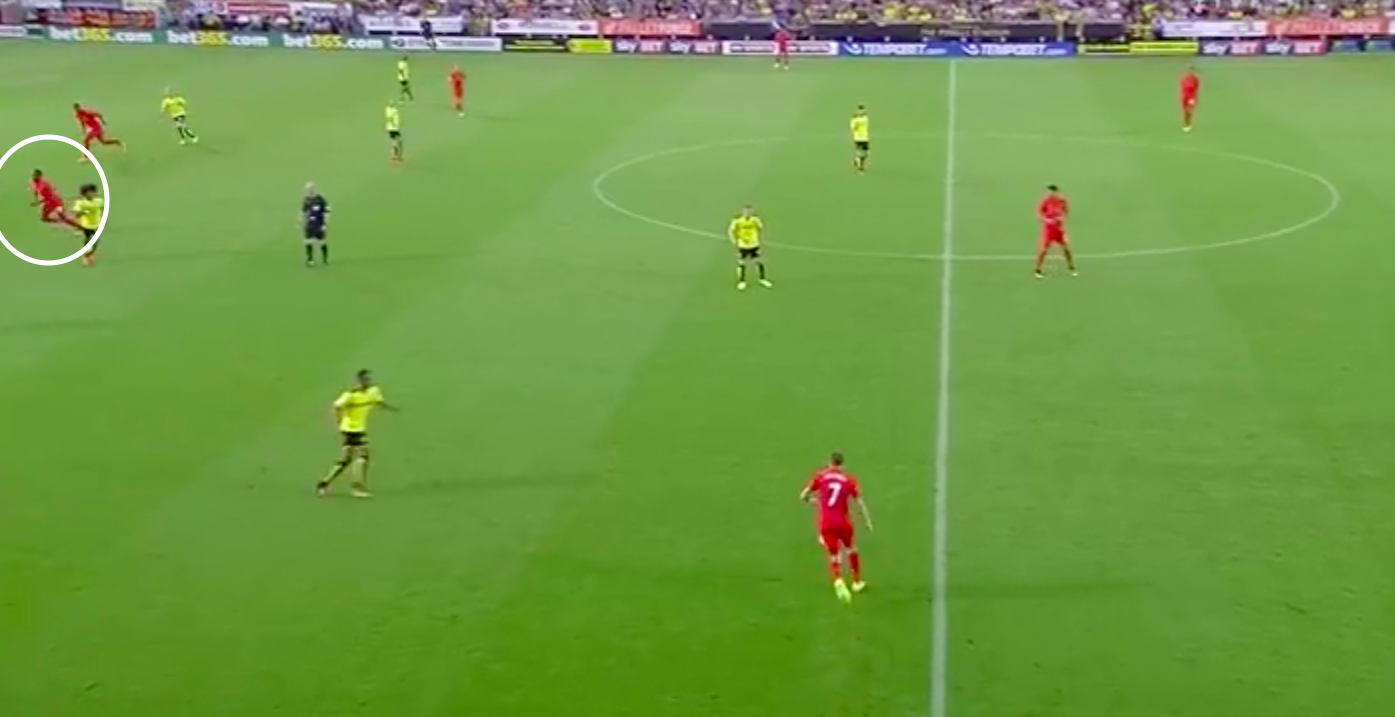 The above two screenshots are taken from the build up before the Origi chance early on. Liverpool recycle possession for a bit and look to tease Burton Albion out. They weren’t playing a deep line but Liverpool wanted to create space between defence and midfield. All XI Burton players are in their own half in this build yet there looks to be acres of space for Liverpool. That’s because of the movement from both attack and midfield. As soon as Milner cuts onto his favoured right foot both Mane and Origi are on the move threatening to get in behind. The defence goes with the pair and this increases the gap in front of them for the Liverpool midfielders.

Also, look at the space Origi is in because of Mane’s movement across him.

This screenshot is taken a few seconds after the two above. Liverpool have retained possession and Firmino is just about to play the ball to Mane who then threads it through to Origi. Look at the space between the Burton midfield and their defence. Liverpool have worked the ball to purposely create this opening. They know the Burton defence won’t push up because of the threat in behind. The Burton Albion midfielder closest to Lallana can’t shuffle over and fill the space because then there would be a chance of an overload on the right with Lallana, Mane and Clyne.

Mane is circled in two of the three screenshots simply to show his movement. In the first picture he’s cut across play to create space for Origi and in the second one he’s back in his right sided role ready to make the same move across Origi again if necessary. Like an elastic band being stretched he does what’s necessary to create space/a chance before falling back into his original position.

The attacking trio all linked up to create the chance. It was all down to the movement of the three. Firmino benefitted from the original Mane and Origi run but at the same time the latter two benefitted in the second phase from Firmino dropping deep.

Side note – Mane really seems to like that cross field incisive run without the ball. In the above gif you’ll see Mane making that move again but this time from the left hand side after the introduction of Sturridge. He makes the run across field and takes the left centre-back with him which just opens up the near post for a Liverpool player to attack if he decides to cross the ball in.

Could Klopp be tempted into fielding that attacking trio in the future? There’s no reason Coutinho couldn’t play the Lallana role if Klopp wanted to get him into the side.