After a midweek pick-me-up against Burton Albion on Tuesday evening, Liverpool get stuck back into Premier League action on Saturday with their third league game of the season, away at Tottenham Hotspur.

It’s Liverpool’s third straight away game before the international break, and it’s after Saturday’s game that fans can look forward to Anfield’s expanded Main Stand being put into use on Match day 4, against Leicester City. 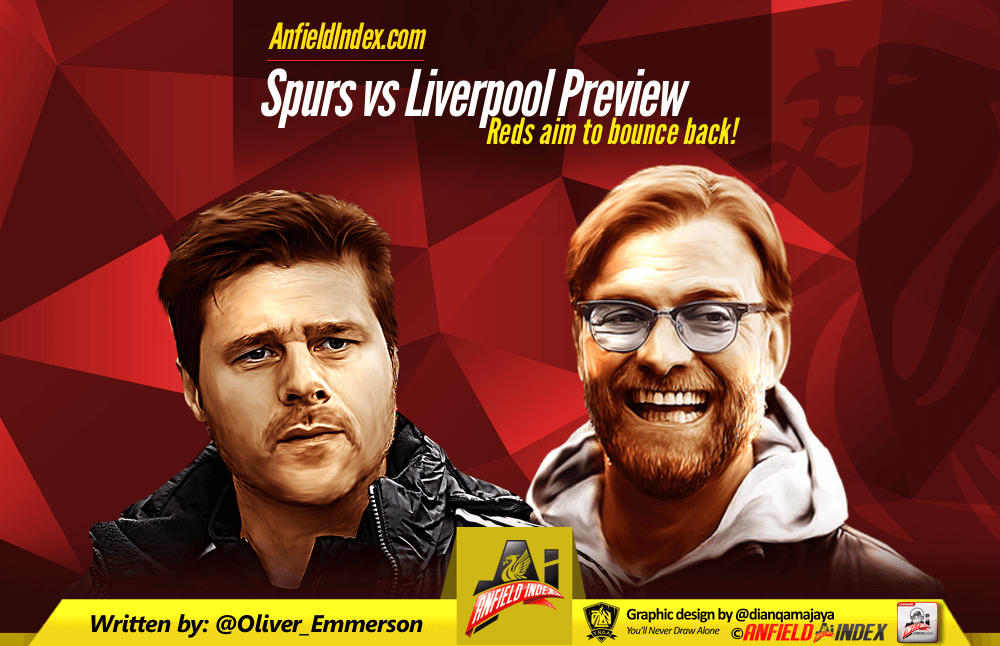 It’s been a mixed start to the season for each side, starting with Liverpool. The Reds started away at Spurs’ rivals, Arsenal, with a game that will live long in the memory after they stole a 4-3 victory thanks to 20 minutes of attacking brilliance in the second half.

However, last weekend was when it went wrong. The Liverpool way, as it were. So much optimism built up from that opening weekend victory, so much hope torn down by a shocking performance at Turf Moor. Going away to a newly promoted side can always be difficult, but going down 2-0 to Burnley despite having 80% of the possession was a disgrace for Jürgen Klopp’s men. You’d say Spurs are the slight favourites for this one judging by the odds at www.matchbook.com.

Things did improve on Tuesday, as previously mentioned. Albeit an away tie to Burton Albion in the second round of the League, sorry… EFL Cup, the 5-0 win that came about was a huge morale boost for Klopp and co.

Tottenham went on an unbeaten 15 game run after losing their first match last season, and are hoping to go one step further this time around after going through their first two games without defeat. They were fairly disappointing on the opening day at Goodison Park, but nicked a 1-1 draw thanks to Erik Lamela’s header. The first win came on Saturday, Victor Wanyama’s late header the only goal of the game against Crystal Palace.

Those results leave the Lilywhites seventh in the table on four points, Liverpool 11th with three.

With Liverpool’s injury list slowly reducing in size, there were concerns against Burton as Divock Origi, Emre Can and Roberto Firmino all picked up knocks. However, Klopp seemed fairly calm about all of those, meaning you’d expect the three to be available on Saturday. Sadio Mane should be too, having returned against Burton following missing the Burnley game with a shoulder injury.

Mamadou Sakho is still out injured despite returning to training, although rumours suggest that he could be out of the door anyway via a loan move to a fellow Premier League side. Lucas Leiva and Joe Gomez remain out, as does Sheyi Ojo. Loris Karius too, remains sidelined with that broken hand. It will be interesting to see whether or not Klopp uses Firmino in the false nine role, or if Sturridge will keep his place as the main striker after a brace on Tuesday.

Tottenham are in the glorious position of having next to no injury troubles, with their only man injured being captain and goalkeeper Hugo Lloris, admittedly a big miss. Still, they’ve got a more than capable replacement in Michel Vorm. Moussa Dembele continues to serve a suspension, meaning Eric Dier will line up alongside Victor Wanyama in centre-midfield.

Liverpool firmly derailed Spurs’ title charge the last time these two teams met, earning a point at Anfield with a 1-1 draw last season. In truth, the Reds could have won the game, opening the scoring through Philippe Coutinho before Harry Kane span Lovren to rattle the ball past Mignolet for an equaliser.

Hugo Lloris made a number of fine saves in the game to deny the likes of Sturridge and Lallana, with the result leaving Liverpool way off the top four, whilst Tottenham allowed the eventual champions Leicester even more room to breathe in the title race.

Klopp had his first game as a Liverpool manager against Tottenham in the last time these two met at White Hart Lane. That game, a cagey match, ended 0-0 with Origi – a shadow of his now self – hitting the crossbar with the best chance of the game.