There’s been a lot of talk recently surrounding Liverpool’s continuous struggles when facing teams who park the bus following on from the 2-0 defeat to Burnley which saw the Reds dominate possession but fail to carve out any clear cut chances.

The Clarets are one of a handful of teams within the Premier League who look to batten down the hatches. Liverpool have failed to work out an effective formula to beat teams with a deep defensive line/low block and the opposition look to exploit this inability. They look to frustrate and test the patience of the players, who start shooting from distance, in their quest to grind out a result. And for a few years now it’s paid off. 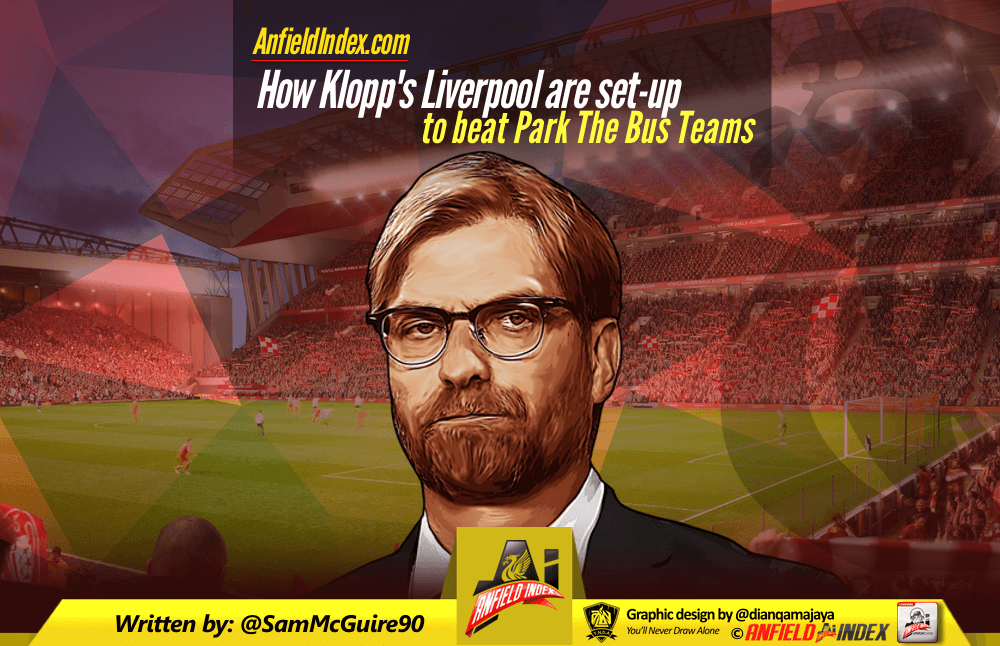 I spoke with former Liverpool, Wigan and Watford academy coach Tim Lees to find out he would approach a match were he expects to have 80% of the possession because the opposition has no interest in attacking.

“Playing against a low block is one of the most difficult yet prevalent problems in the game. If a team is going to dominate the ball and look to control the game then they need to have knowledge of how to break down a deep lying defence. The two situations go hand in hand and you rarely get one without the other.”

“Many teams defend extremely compactly and focus on starving the opposition of space thus it is vital that elite players have years of coaching in, and experience of, breaking down the wall. The best players in the world can play and operate inside the blocks dominating opponents in 1v1 situations and finding ways to play forward and break the lines. If you look at the elite players in the Premier League they all are game changers inside that block and they don’t particularly need the spaces to dominate; practitioners include Hazard, Özil, Sánchez and Coutinho. If a team is setting up to defend deep then generally they are happy to block the middle of the pitch, starve you of space in terms of vertical lines and prioritise showing you wide.”

There are several important principles that I would encourage against a low block:

If the opposition have managed to shift part of their block over in time then a quick overload to break the defensive line is imperative. Here, the full back must overlap if the winger has come inside and underlap if he is tight to the line. As soon as a midfielder receives on the back foot or the pass from the opposite winger goes backwards, the weak side full back begins his forward movement. Teams who circulate slowly have a high percentage possession with little penetration, shots or goals and are vulnerable to counters. Having 1v1 (defender in front) specialists on the sides are of huge importance.

Liverpool and removing the parked bus.

While it looked like Liverpool struggled against Burnley there were signs that the team were just the one pass away from breaking through.

As Tim points out having runners from deep is key to unlocking deep sitting teams. It appears Klopp has a similar thought with the acquisition of Gini Wijnaldum and using Adam Lallana in a more withdrawn role. These players have added that threat to the Liverpool midfield. Against both Arsenal and Spurs the pair linked well in the final third to create chances. The Arsenal one resulted in the Adam Lallana goal and the Spurs situation saw Sadio Mane’s goal ruled out for offside after Lallana broke from deep to get ahead of Wijnaldum who was in possession at the time.

Fast circulation against Arsenal and Spurs created chances for Liverpool but against Burnley the build up seemed much slower. What’s encouraging is the quick movement and quick passing cut through the better teams so had it clicked against Burnley it could’ve been a cricket score. What might have been had Sadio Mane been fit for that game.

Liverpool do look to play on transition. It’s possibly why Klopp positions the wide players, Coutinho and Sadio Mane, fairly narrowly so that when Liverpool regain possession and look to counter they have important players in dangerous areas. It’s set up just for that.

Klopp seems to want the likes of Roberto Firmino, Sadio Mane, Daniel Sturridge and Divock Origi to be playing in and around the penalty area to keep the oppositions centre-backs constantly on the move. If you watch the Burnley match again you’ll note Sturridge and Firmino get into really good positions having isolated certain Burnley defenders but the passes never arrived for various reasons.

When Sadio Mane signed many fans thought it would be his pace that would be a welcomed addition to the team but the more I watch it the more I realise it’s his movement the team had desperately lacked since Luis Suarez had left. Mane is forever on the move and it’s why when he’s played Liverpool have created more chances. He’s integral to changing tempo. He’s needed to break the lines. He’s the perfect player for these types of matches.

Had Emre Can and Sadio Mane appeared for Liverpool against Burnley the Reds would’ve been a different prospect altogether. Both take Liverpool to another level. Can’s ability on the ball and being able to break the lines with his passes coupled with the movement ahead of him means Liverpool are in their best position in years to be able to defeat these types of teams.

If you want to read more from Tim Lees his book is available to purchase here.