The start of the 2016/17 season has been largely underwhelming for Liverpool manager Jurgen Klopp and indeed for the clubs fans. A high octane start in the win at Arsenal was followed by a largely ineffectual performance against newly promoted Burnley.

The last game before the international break saw Liverpool somewhat unfortunate to come away from a trip to Tottenham with only a 1-1 draw.

Finally after the league has paused to catch its breath after the international break we saw Liverpool return to Anfield for their first home match of the season and the first game in front of the new main stand. To add to the occasion this match was against the reigning champions Leicester City.

The match saw the Brazilian midfielder Lucas moved back to play at centre back partnering Joel Matip. The move was designed to give Liverpool a better base with which to build out from the back with both Lucas and Matip comfortable with the ball at their feet.

The midfield three remained the same configuration that we have seen for most of the season with Henderson, Wijnaldum and Lallana all playing in the roles to which they have become accustomed over the matches against Burnley and Tottenham. Adam Lallana in particular has started to look extremely strong as the most mobile of the three midfielders.

In attack we again saw a largely fluid system from Klopp with Sadio Mane, Daniel Sturridge and and Roberto Firmino interchanging positions as the match progressed.

The front three were the key factor in the match for Liverpool as they constantly pressed and pressurised the Leicester defence in transition limiting the danger that last seasons champions could pose. Leicester rely on direct passes in to the channels for Jamie Vardy to chase and this attacking strategy was rendered relatively ineffectual.

There are a few coaches in football today who set their sides out with strategies for pressing in defensive transition that can evolve or adapt on the fly as the game progresses. The likes of Pep Guardiola and Thomas Tuchel for example often have multiple strategies for transition that their teams can organically use as the match situation dictates.

For the most part coaches will instruct their team to play with one of three defensive blocks, low, medium or high and their teams will press according to how high or low they are set out.

In this match however Leicester struggled for the whole game to find a defensive structure that could neutralise the attacking play from Liverpool. As the game went on and Liverpool became even more dominant this became even more obvious as every clearance from Leicester appeared to fall straight at the feet of a Liverpool player.

Leicester were set up in their now traditional 4-4-2 shape with Vardy and Okazaki in the first half and Vardy and Ahmed Musa in the second half. The initial plan appeared to be for the front two to press the Liverpool back line and goalkeeper when in possession of the ball to force Liverpool to make mistakes.

Unfortunately for Leicester they routinely attempted to press high with no secondary support coming from midfield.

This meant that time and time again Liverpool were able to play a simple ball through the initial press and in to space in the centre of the pitch. By isolating and playing through the pressing structure in this manner Liverpool were then able to move in to the middle third of the pitch relatively unopposed and look to play from this more advanced position.

As the game progressed and Liverpool became more dominant in possession we saw Leicester drop in to a more passive block allowing Liverpool comfortable possession in their own half and even in to the Leicester half.

Unfortunately the spacing and positioning of the Leicester block played completely in to the hands of Liverpool with the movement of the front three. The midfield line was far too straight with no central depth meaning that Liverpool were able to comfortably play around or through the Leicester midfield with the front three taking it in turns to drop in to the space between the defence and midfield to take possession of the ball.

Last season Leicester won the title based on the strength of their defensive structure and the goals of Jamie Vardy. This season it appears sides – and in particular Liverpool – are better able to prevent Leicester from creating chances.

Liverpool play between the lines

With the space being created within the opposition’s defensive structure it is also important that you have strategies in place to ensure that your team can take advantage of this.

This is a perfect example of the disruption that comes from players playing between the lines.

Wijnaldum and Milner have isolated the defensive player and have a 2-1 overload. This immediately means that the right back and nearest central midfielder are concerned about closing down whichever Liverpool player moves forward with the ball.

The problem that both covering players have is that Roberto Firmino has moved in to a pocket of empty space just behind them. If either Leicester player is forced to move up to engage the ball this just increases the space that Firmino has in which to move and receive the ball.

At some point in the attacking movement Leicester will be forced to make a choice which will weaken their defensive structure.

In this instance we see the clear benefits of having defensive players who are comfortable when playing the ball out from the back.

Joel Matip has the ball on the left hand side of the defence and he is under a reasonable amount of pressure.

The pass that Matip plays cuts our six Leicester players and finds a team mate who has moved in to space between the midfield and defence. By cutting through the defensive lines in this manner you are giving yourself a great chance to create an overload in the final third against the opponents defence.

This is the initial build up to the Sadio Mane goal.

The first pass is again a straight ground pass from the Liverpool defensive third that splits the first two lines of pressure from Leicester and finds the feet of Roberto Firmino in space between the Leicester defence and attack.

The key point now is that as Firmino receives the ball the central defender steps out to apply immediate pressure to the Brazilian and in doing so leaves a huge gap in the defensive line.

Firmino then lays the ball back immediately to Henderson who has moved in to a supporting position. Again the ball from Henderson is first time and dissects the Leicester defensive line which is weakened by the absent centre back.

Daniel Sturridge is alert enough to spin in to the space and run on to the ball before setting up Sadio Mane for an easy finish.

This movement is known in most places as up, back and through. A simple yet effective mechanism for creating space for your attackers.

The movement and interchanging of positions from the Liverpool front three supported by Lallana and Wijnaldum from the midfield and Clyne and Milner from the full backs area was superb throughout.

The fact that the Leicester defensive line is so narrow creates space to be exploited in the wide areas.

Here Sadio Mane realises that the space is behind him and moves towards the ball. This simple movement pulls the Leicester defender across with him and further opens the space for Clyne to move in to.

As these movements take place Liverpool are forcing Leicester to choose between covering Clyne wide and leaving space inside for Liverpool to attack or staying narrow and ceding the wide area of the pitch. 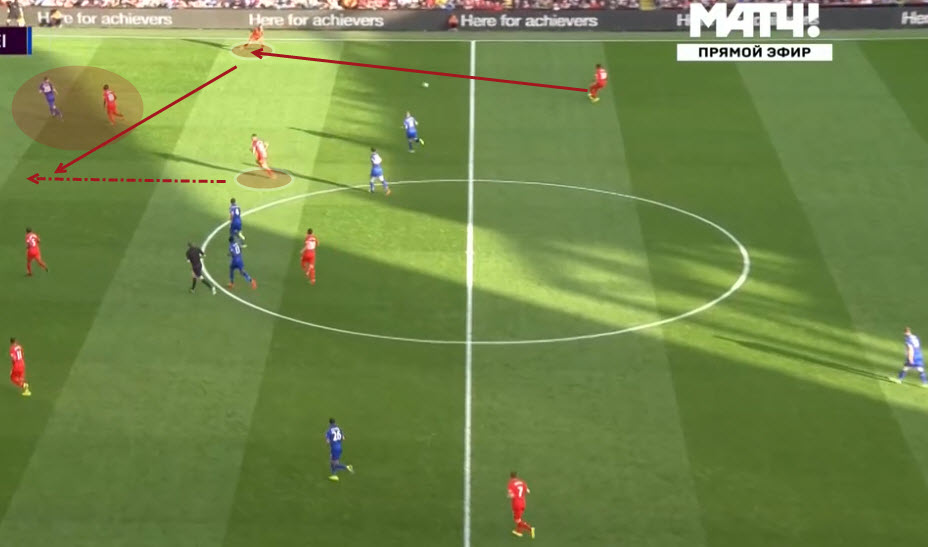 Again here we see Liverpool playing in to a situation in which they have an overload against a wide Leicester defender.

Sadio Mane is being covered by the defender and the defender finds himself isolated against the man taking possession in the wide area.

The defender is already in two minds whether to stay with Mane or step out to engage the man in possession of the ball. This is further compounded when the midfielder makes a vertical run on the blind side of the defensive player.

The ball is played in to the midfield runner in the end.

By overloading a single defensive player in this manner Liverpool make it extremely difficult for Leicester to prevent them from playing through towards goal.

These forms of movement were one of the key aspects for Klopp whilst he was at Dortmund.

In this kind of form and with this relentless attacking strategy Liverpool look capable of beating anyone in the league.

With this performance Sadio Mane and Roberto Firmino have both solidified their importance to the team as a whole both with their individual quality and their ability to link with others.

We still have to see Emre Can make his return to the midfield setup to offer an entirely different dynamic.

There are definite signs that Liverpool are starting to find form and consistency and that can be only good news for all concerned.