Hull at home is the kind of match that all too often caused Liverpool to stumble in recent years. On this occasion a combination of irrepressible attacking movement and midfield creativity swept Liverpool to victory.

There have been definite signs over recent weeks that Liverpool are finally settled in to the tactical system and playing style that Jurgen Klopp envisioned when he took charge of the club. Leicester City and Chelsea were overcome without any real difficulty and a potentially difficult cup tie against Derby proved no obstacle.

The players are now approaching the level of fitness that Klopp requires for his high intensity style of play with Emre Can in particular now fit enough for a place on the bench.

There are still some doubts in the fan base as well as in the media and these doubts have their roots in the 2-0 loss away to Burnley in the second match of the season. In that match the opposition were content to sit in a low block after scoring early in the match and Liverpool struggled to break them down.

We should make no mistake that Hull City will have studied the blueprint presented by Burnley in that match and despite their lack of squad depth they have still performed above expectations to this point in the season.

In this match we saw summer signing Loris Karius finally fit after suffering a broken hand in the pre season and he replaced the Belgian international Simon Mignolet. There was also a change in the defensive line with Ragnar Klavan coming in to replace the Croatian Dejan Lovren.

The midfield strata remained unchanged with Lallana, Henderson and Wijnaldum continuing to impress.

The biggest surprise came in the final third where Klopp has an array of options. In this match we saw Roberto Firmino preferred in the lone striker role with Daniel Sturridge dropped to the bench and Coutinho coming in on the left hand side.

In earlier matches this season Liverpool have struggled to play out of the defensive third when under pressure from the opposition. Jurgen Klopp has a clear preference for playing through the thirds in the build up phase and this means that the defensive players and Jordan Henderson as the number six or controlling midfielder have to be capable when bringing the ball out.

Here we have Ragnar Klavan under extreme pressure in his own penalty area as Hull looked to force a mistake deep in the Liverpool half.

Instead of becoming flustered though Klavan had the composure to dribble the ball forward and break the initial press with his movement. Interestingly though he also had players dropping in to space to offer options to play through the press with a pass. Both James Milner and Jordan Henderson are offering for a pass.

This is a huge departure from the early stages of the season when there were no players that seemed to want to take responsibility on the ball.

This is another example of the type of movement that facilitates Liverpool playing out from the back. As pressure is placed on the man in possession there are two players in an advanced line playing ahead of the ball that are both offering options for the ball to be played in to.

In the modern game and for a team like Liverpool it is incredibly important that they have a clear plan and structure in place to allow then to build an attack from deep.

Sustained and measured possession in these areas can lead to a much more effective attacking movement when they move the ball up and through the thirds.

There are a number of different rotations that teams can employ in the middle of the pitch to allow for passing options and access in to attacking areas. In this match we saw Liverpool employ two distinctive rotations, one on the right flank and one on the left flank to best suit the ID’s of the players that were selected.

On the right hand side Sadio Mane is most comfortable moving in to the half space as the attack develops. As he moves infield we see Nathaniel Clyne advance down the right flank and Adam Lallana slot in to a central position.

The rotation on the left hand side was slightly different. By playing Coutinho on the left flank it was clear that there would need to be a plan to access his potential and allow him to drift in to central areas. As with the right side Coutinho would move inside but he would cut across two lanes in to the central zone.

James Milner would constantly access the emptied space in the wide area offering width and stretching the opposition defence. Wijnaldum in the central zone would then shift across in to the half space but he would maintain a deeper role allowing Liverpool an option to recycle possession of the ball back across the central area. 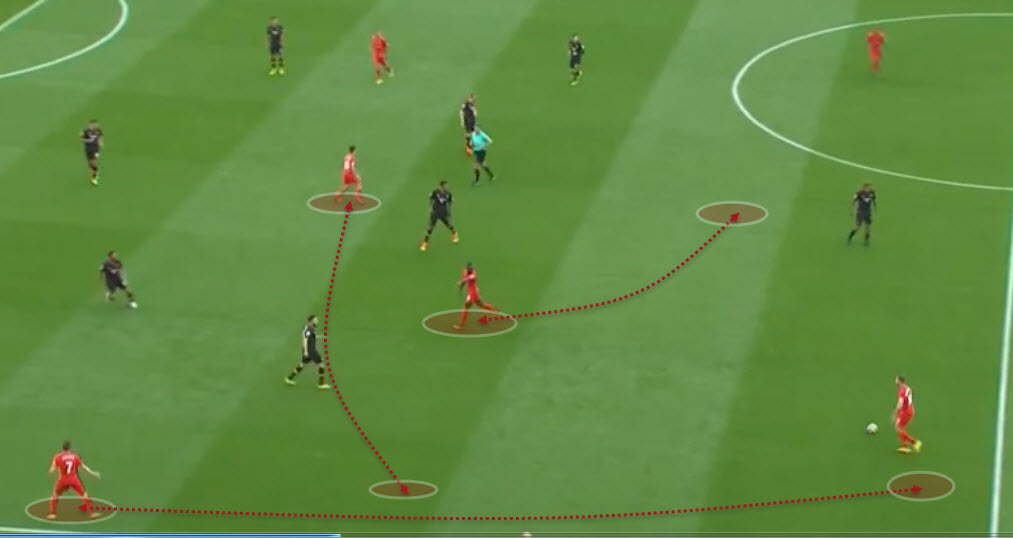 Here you can see the rotation on the right hand side in action. As Klavan advances from the defensive area Coutinho takes the non verbal cue to cut across in to the central area.

In the wide lane James Milner advances immediately in to an advanced area and Wijnaldum advances in to the half space to provide a third option. 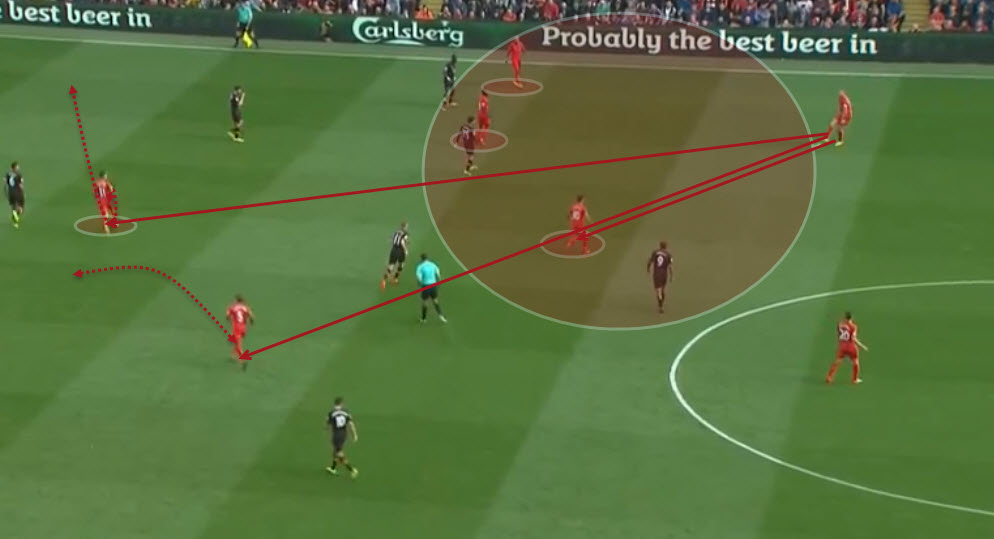 Another example of the rotations from the Liverpool midfield but this time a more extreme example.

Mane and Clyne are in position to advance the attack through in to the final third but there are two further additions that create a sense of chaos in the Hull defensive structure.

Coutinho has cut across from the left side further evidencing that he was given the freedom to roam across the pitch by Klopp. In the more advanced area Firmino is looking to run in to and access the space in the wide area. This movement pulls the defensive structure across and provides further gaps for runners from deep to run in to.

Fluid movement in the final third

The combination in the final third of Sadio Mane, Roberto Firmino and Coutinho is at times unplayable. Mane in particular has adapted to the Liverpool system and the requirements of Jurgen Klopp extremely quickly.

They have developed an understanding of their individual games really quickly and the speed of thought and interchanging of positions can make it impossible for the opposition to defend against. 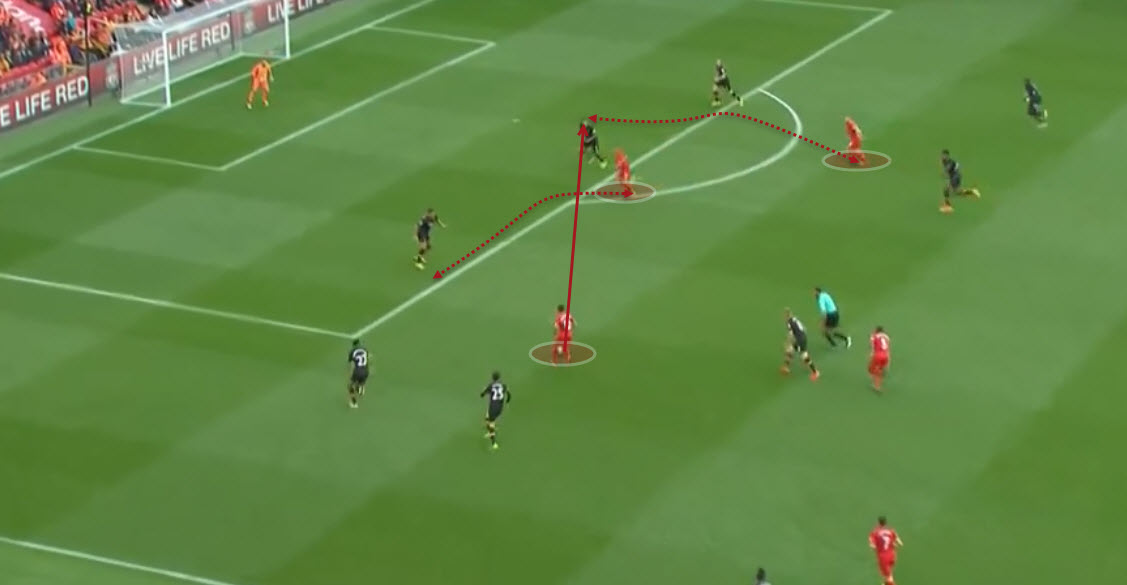 This is an image taken of the movement for the Lallana goal that opened the scoring. As the ball is being carried in from the left hand side the movement of Roberto Firmino across the penalty area is both extremely unselfish and tactically intelligent.

As he cuts across he pulls the attention of the Hull defenders with him and Adam Lallana is able to access the space that he has left behind. 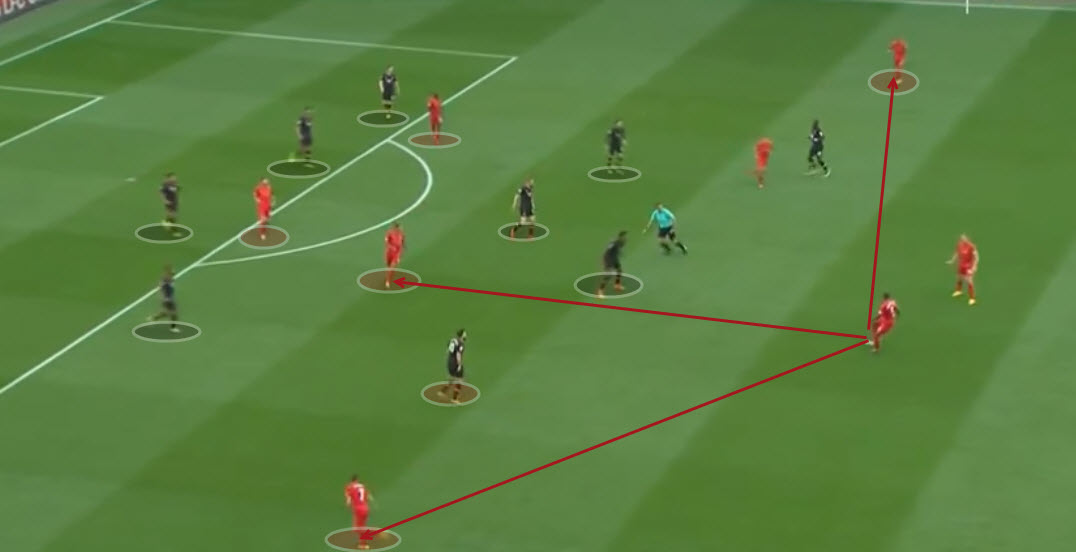 The Hull defensive structure has been narrowed as the Liverpool attackers move infield and as Liverpool look for their next access point there are three clear options. They can play centrally in to the heart of the defensive structure or bounce the ball wide where both Milner and Clyne are in acres of clear attacking space that can be exploited.

There is no doubt that the sending off changed the game and made it more difficult for Hull to withstand the attacking threat of Liverpool.

That said all Liverpool fans can be extremely happy with the way that the attack and the midfield worked together to create space for one another and overcome what could have been a stubborn deep block.

This performance will have gone some way to erasing the memory of the performance against Burnley earlier in the season and now teams will have to think twice before setting out in a defensive system against this side.