There was a lot of talk over the summer surrounding the value, the importance and the need of ball-playing centre-backs in the modern game. It was the fear of the unknown and like anything, the British media appeared to quash the idea labelling it too risky, unnecessary and just asking for trouble while asking the question – why don’t they just clear their lines like Stuart Pearce and Tony Adams did back in the day, it did those guys no harm?

After all, a defender is there to prevent goals and not assist the attack. It’s the reason John Stones is treated like a criminal instead of being praised, like he rightly deserves, for going against the grain and evolving to fit 2016 football as opposed to 1996.

The press seemed to take a lot of pleasure in analysing the mistakes the player made in situations where he could’ve just put the ball out of play. Milking the fact it puts the team under pressure instead of properly weighing up the pros against the cons and realising Stones will learn from these mistakes and in a few years he’ll be considered one of the best in his role.

Thankfully though, Jurgen Klopp and Pep Guardiola didn’t give the opinion of the British press much importance and proceeded to build a defence with the centre-back pairing being ball-playing defenders. Both teams are currently playing the best football in the Premier League and a lot of it is down to the fact they have footballers in their defence as opposed to defenders.

Klopp’s Liverpool builds from the back. Their attack has been lauded this season; the likes of Adam Lallana, Roberto Firmino, Daniel Sturridge and Philippe Coutinho have been superb, but without the likes of Ragnar Klavan, Joel Matip, Lucas and Dejan Lovren the attack wouldn’t be able to flourish because the ball wouldn’t be in the required areas to fully maximise the attacking players.

In years gone by the team has had Martin Skrtel in their team as a starting centre-back. When in possession of the ball he would tend to look to punt the ball forward. No measured passing and no thought that passing forward 10 yards was actually better than kicking it 40. It was almost impossible to build from the back with the Slovakian.

However, now that Liverpool have Klavan, Matip, Lovren and Lucas playing in that centre-back role they’re able to play through the press, bring the ball out from the back and take opposition players out of the game, which in theory creates space for the midfielders and the attackers. It has a domino effect. If teams attempt to shut Henderson down, much like Hull tried to do, Liverpool are still able to build from the back. 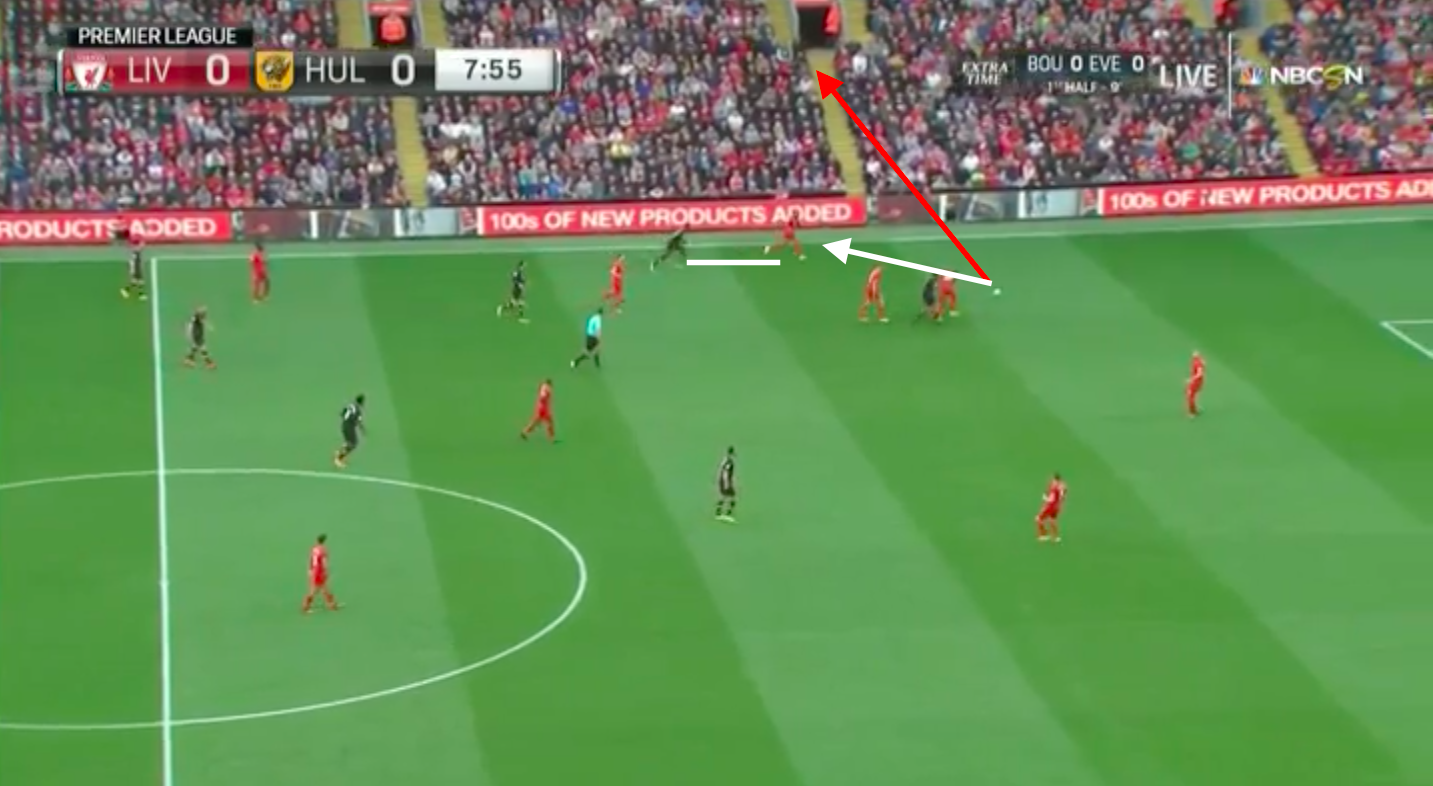 The screenshot above shows Hull pressing Joel Matip early on in the match. The centre-back could get rid of the ball (the red arrow) or make a pass to Clyne (the white arrow) in the hope he’s not pressed by the Hull man behind him (white line). The red arrow option is one most centre-backs would opt for. It’s safe. 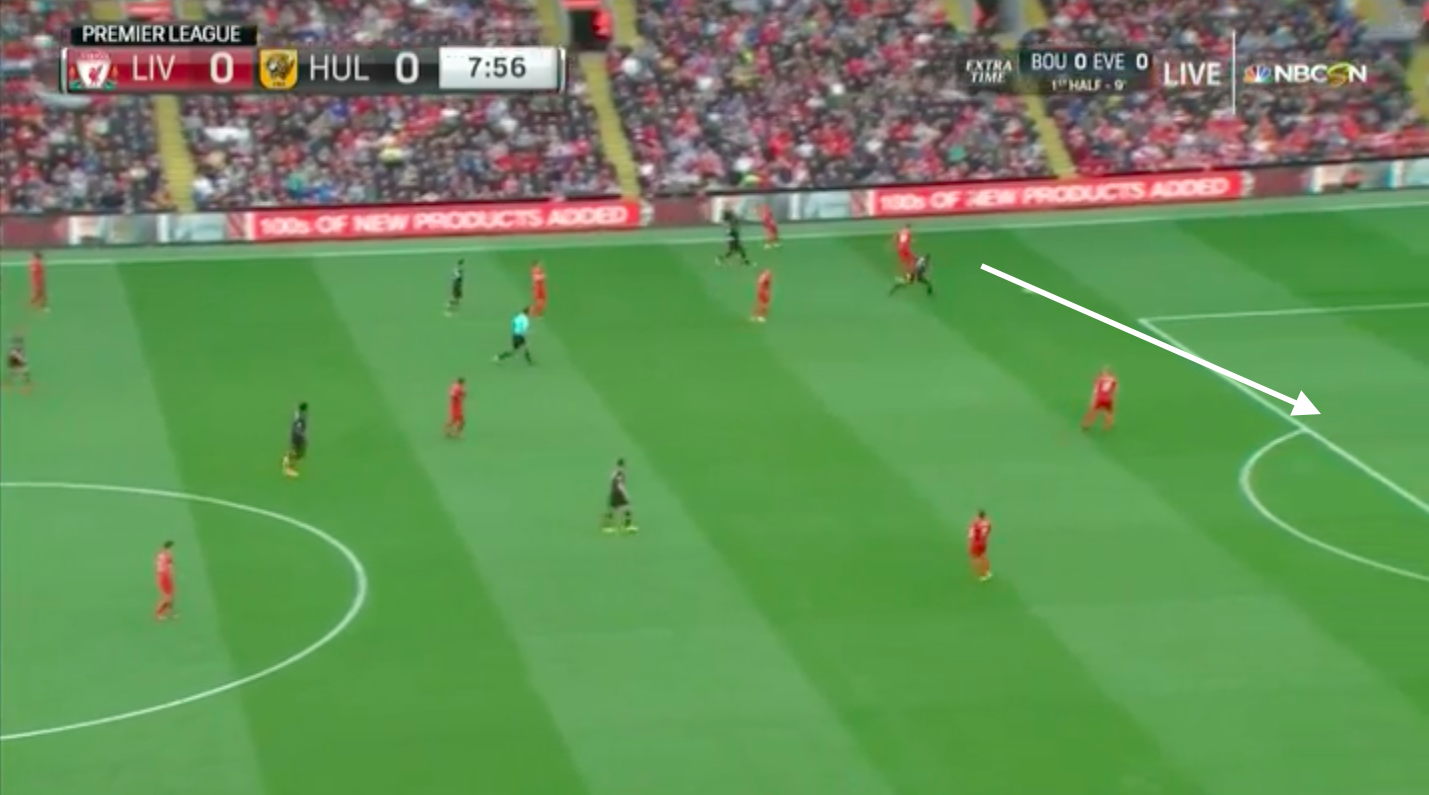 Not wanting to waste possession Matip takes control of the ball and uses his weaker foot to play the ball back to Loris Karius (the white arrow). 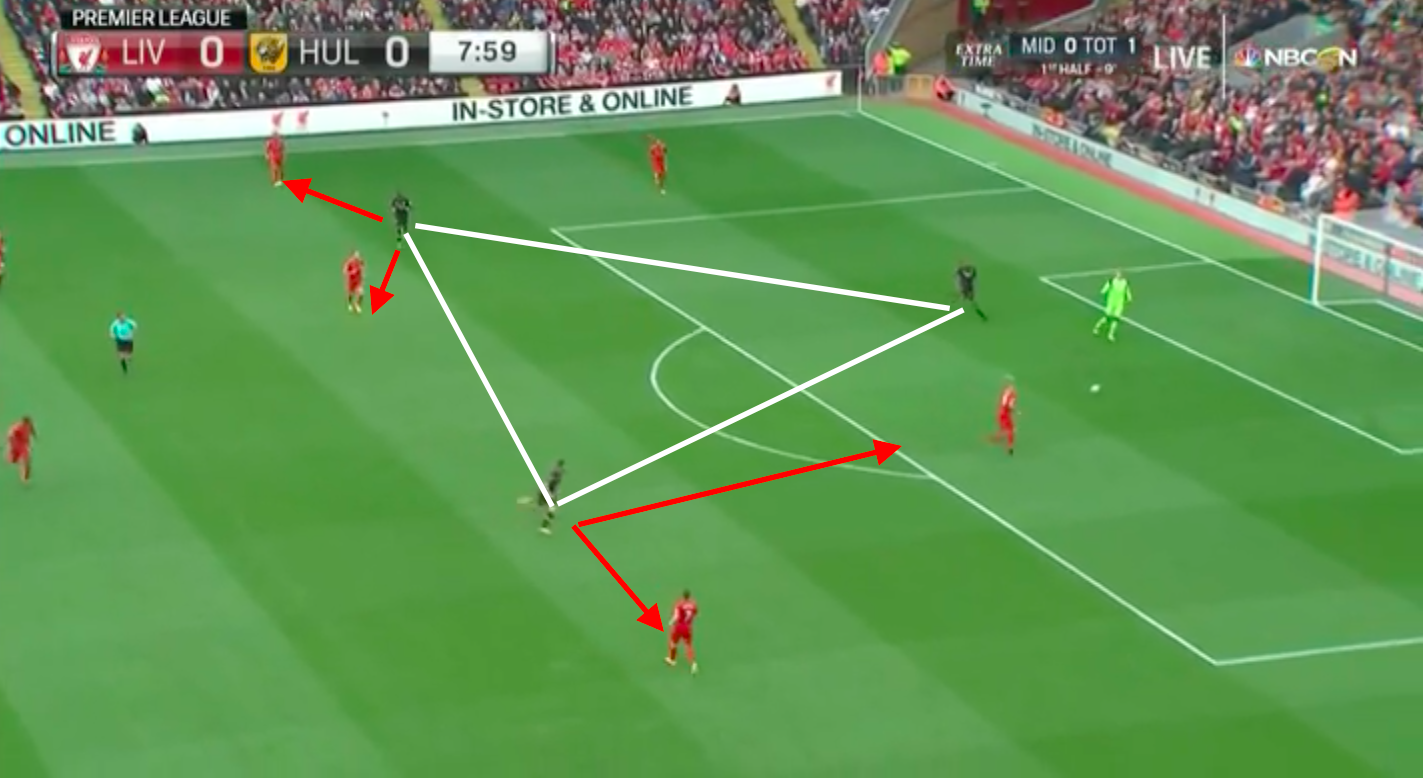 Karius then plays the ball to Ragnar Klavan who has decisions to make. A pass to Henderson is risky given the Hull man in close proximity. Although Wijnaldum is free the rushing Hull player makes what would usually be a straightforward pass a little more tricky. There’s also a pass on to Milner but again that Hull player can shut him down (the red arrows). Although Liverpool have seven players in the picture compared to Hull’s three they’re situated in decent enough positions to make it a difficult. The final option is to back his ability on the ball and play through the press. 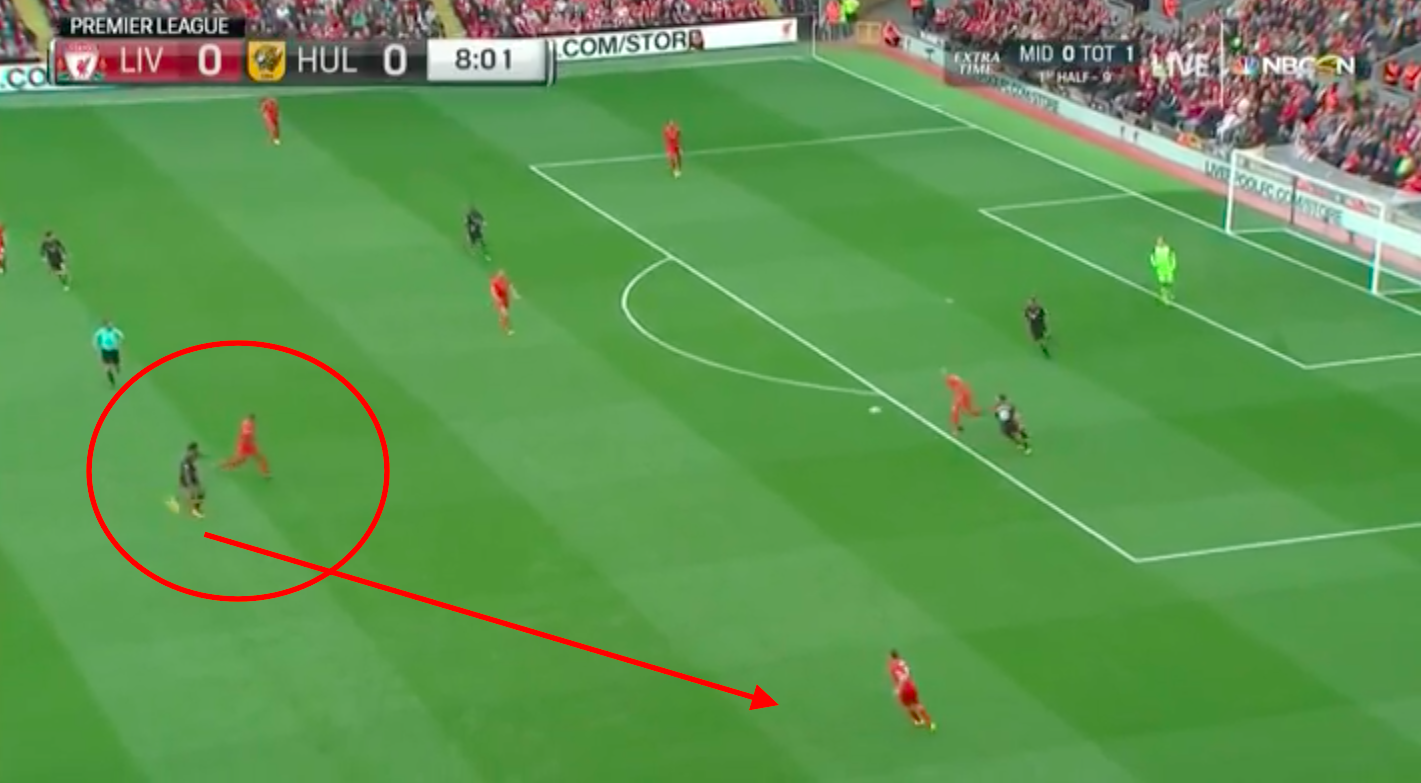 Klavan opts to do the latter and plays through the press. It immediately takes two of the five Hull players in the picture out of the game. It also means the man marking Wijnaldum has decisions to make. If he attempts to shut down Milner he leaves the Liverpool number 5 free. If he doesn’t attempt to get over then Milner has 30 yards of space to run into because the Hull right-midfielder was the one pressing Klavan.

In this instance Klavan passes to Milner who then cuts back inside and plays it to Henderson as Liverpool look to build an attack. This all stems from Matip playing football as opposed to just sticking it in the stands. 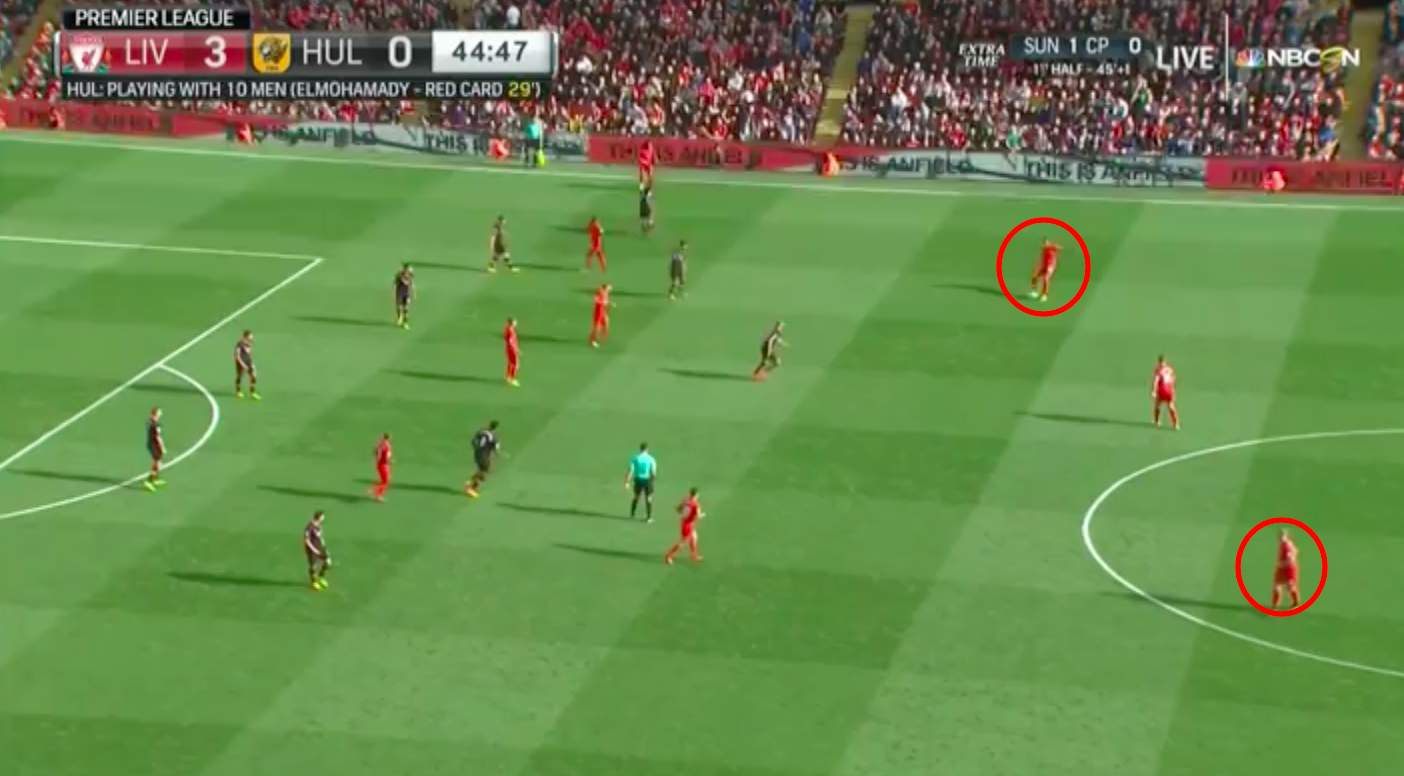 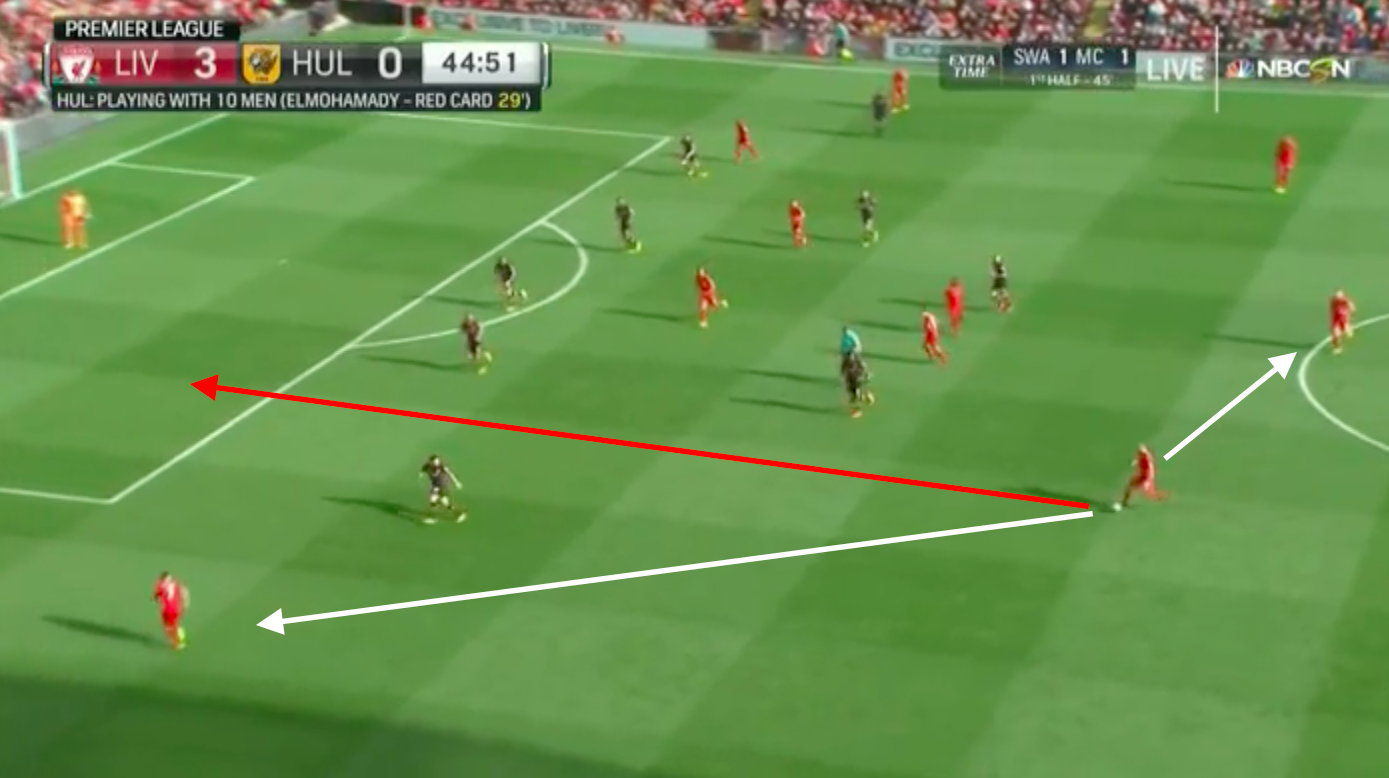 The two stills above show just how much pressure Liverpool put on Hull even at 3-0. In the first image you’ll see both Matip and Klavan with a red circle around them. That’s both Liverpool centre-backs well in the Hull half meaning Liverpool have all 10 outfield players in the attacking half.

Despite this amount of players being in one half the pitch looks massive and there is plenty of space for Liverpool to play into.

In the second picture you see Klavan in possession. The two white arrows are the simpler passes that are on. There’s a simple 10 yard pass to Henderson or there’s a switch to Milner. Instead Klavan plays an incisive threaded pass between the Hull right-midfielder and the Hull right-back. Milner, who attacked the byline a lot in this match, wants to get in behind the Hull players instead of playing in front of them and because of this Liverpool are able to stretch play even though Hull have every player back behind the ball.

The opportunity comes from the fact Klavan is both comfortable and confident on the ball. He not only has the vision to spot the pass but the skill to execute it.

Man City have used Kolarov in that position already this season and although these players aren’t the greatest defenders they are in fact better suited to the team than the great modern day defenders would be. Without ball-playing centre-backs Klopp’s system wouldn’t be as effective.