Trent Alexander-Arnold made his competitive first-team debut for Liverpool in the win against Spurs. It’s been long overdue for a player who impressed during pre-season with his fearless performances. He was expressive in his play, the way that many youngsters are when they get their chance in the first-team. It’s a combination of confidence and youthful innocence, almost as though they’re playing with a freedom many seasoned veterans aren’t afforded.

Daniel Sturridge is the man on the back pages and Divock Origi got plenty of plaudits but it was Trent Alexander-Arnold who really caught the eye in the League Cup match. It was like pre-season all over again with his powerful runs to support the play from deep, aggressive nature when in possession and his direct play, it seems as though he’s ideal for Jurgen Klopp’s Liverpool. The word perfect is thrown around loosely these days but Alexander-Arnold may well be the perfect understudy to Nathaniel Clyne. 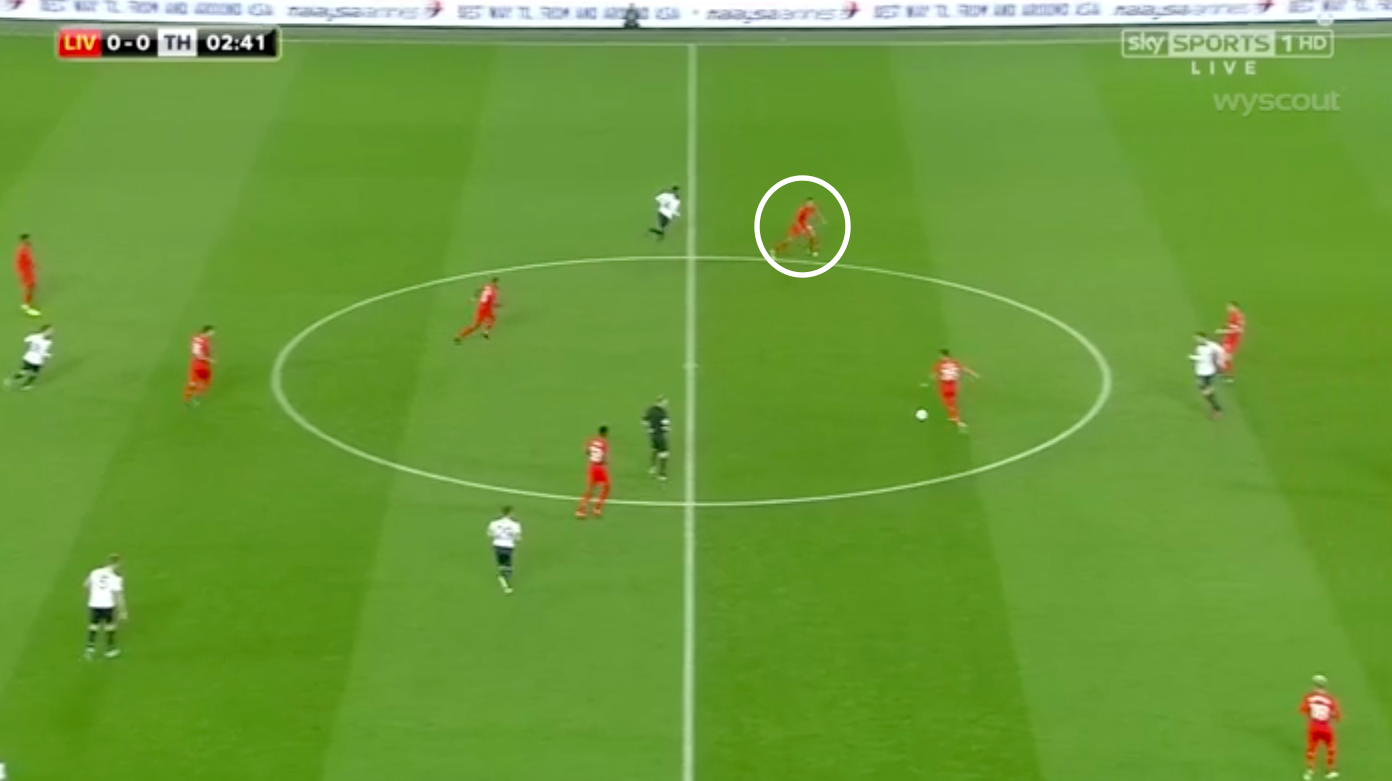 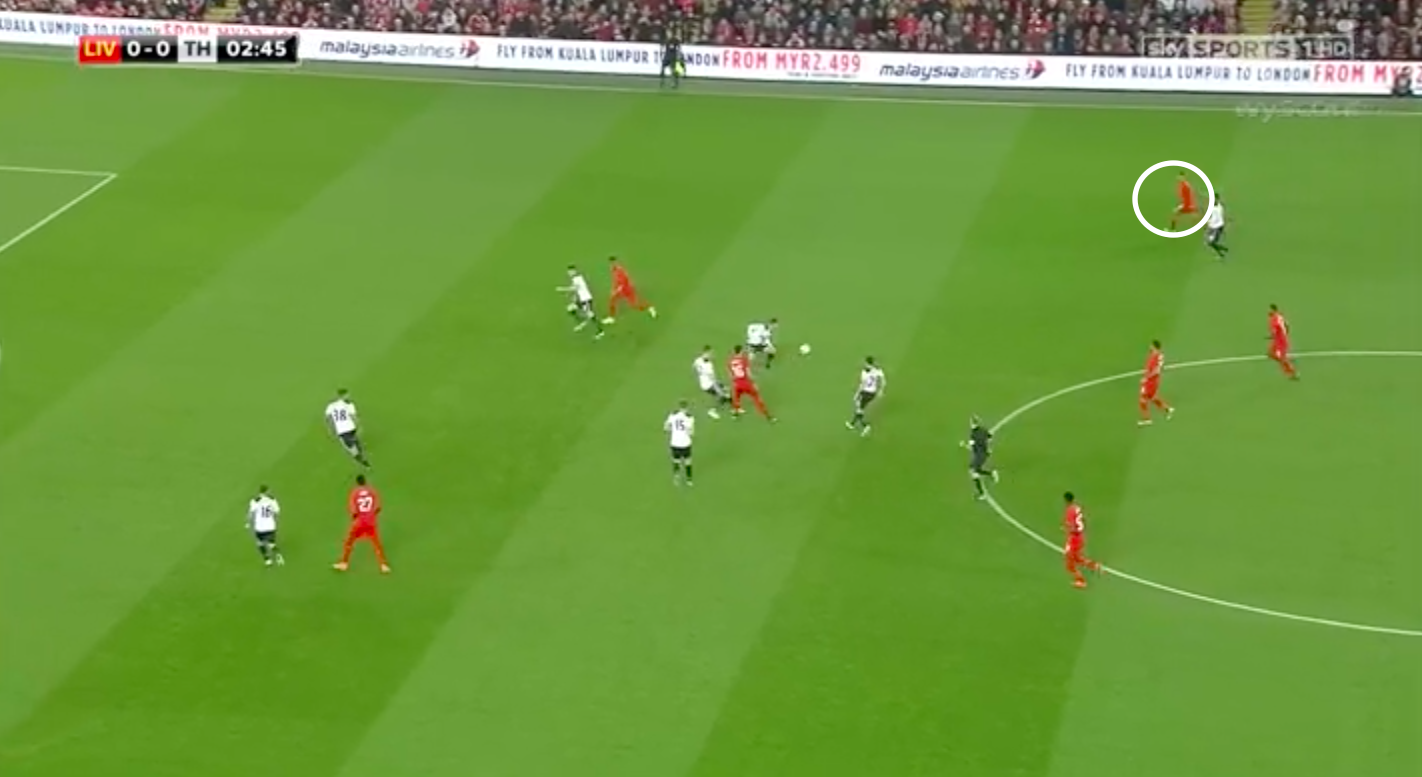 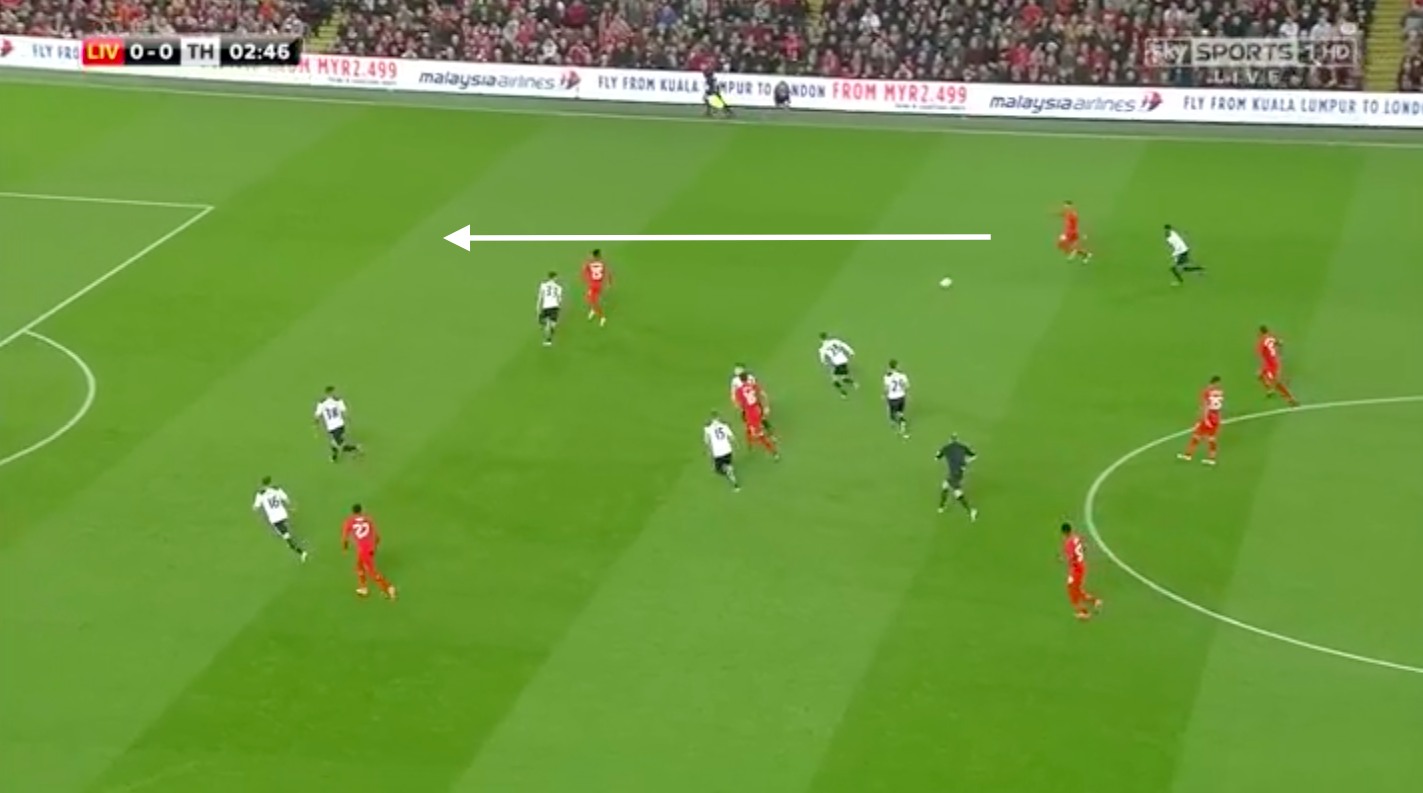 The three pictures above show just how direct and aggressive Alexander-Arnold is. Kevin Stewart makes the interception centrally and as soon as he starts to move forward Alexander-Arnold is looking to make the most of all that space ahead of him on the right hand side. He accelerates past the Spurs left-winger, receives the pass from Marko Grujic and drives into the space. There’s nothing tepid about his play. He makes his way into the penalty area and it takes 3 Spurs players to disposes him. But the key thing here is he knows that he’s expected to support the attack and that he’s the outlet on the right. He didn’t just hold his position incase Spurs won the ball back in the middle, no, instead he make a positive move forward and had the Spurs winger chasing back to face his own goal. 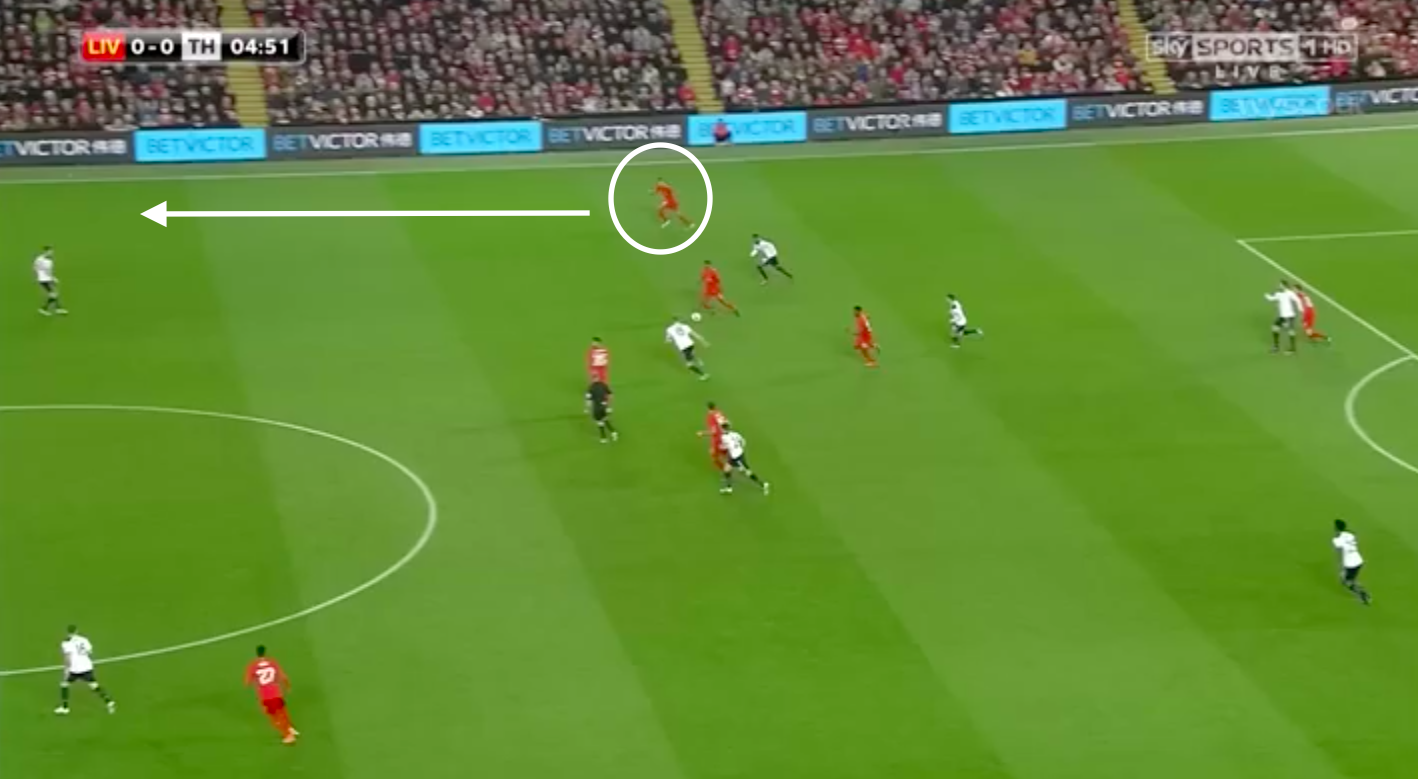 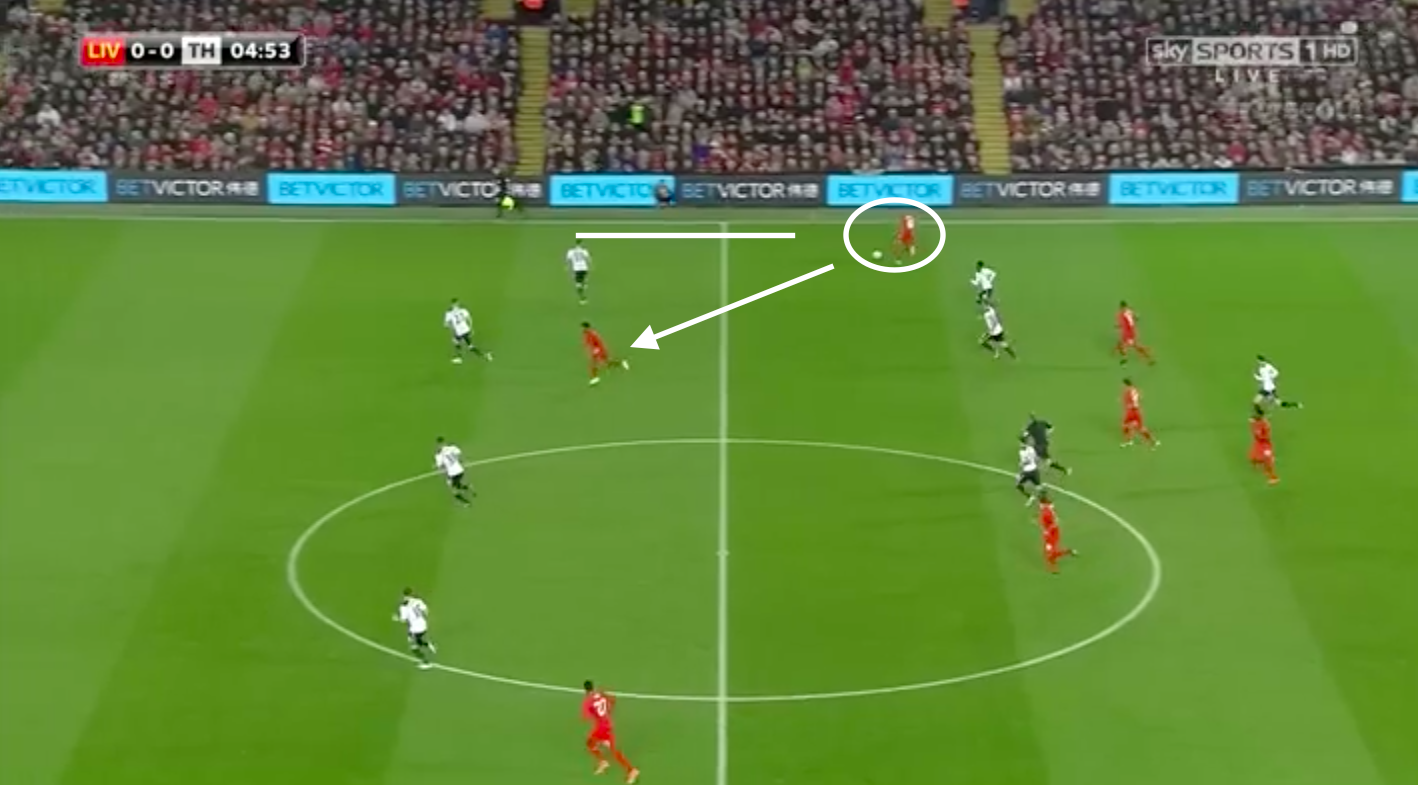 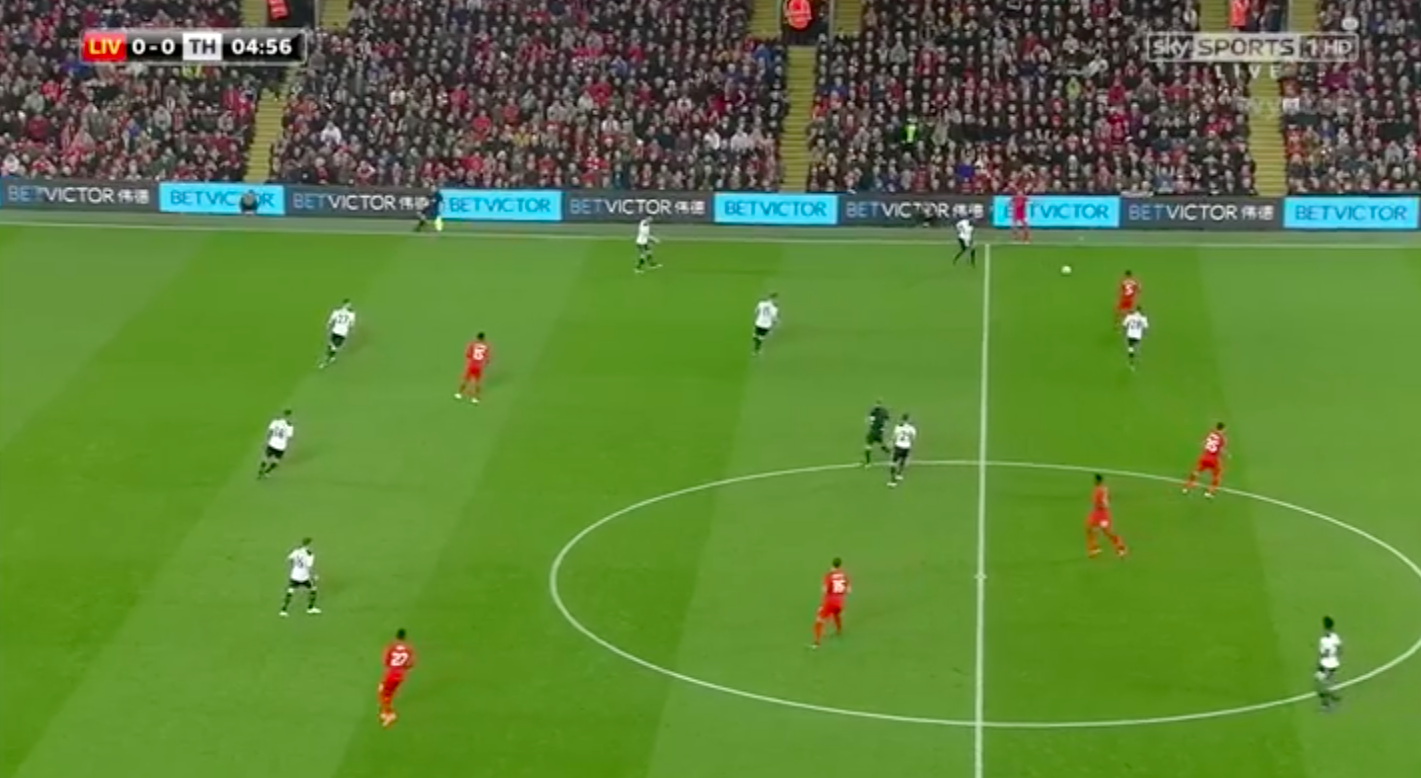 The next three pictures highlight just how mature he is in his play despite his young age. Once again in the first picture you can see Alexander-Arnold breaking into the space ahead of him as soon as Liverpool win the ball back. The the second picture he has a choice; He can either attempt to take Davies on the outside and go down the line or he could play a pass into Daniel Sturridge. The pass to Sturridge may look obvious but he’s got very little support and no matter how good Liverpool’s no.15 is he’s going to have trouble making something happen with plenty of Spurs players back and even more retreating. If he plays that pass to Sturridge and he id dispossessed, Spurs have players in attacking positions for the counter. The youngster acknowledges this and slows the play right down before playing the ball to Wijnaldum and allowing Liverpool to build an attack once again. 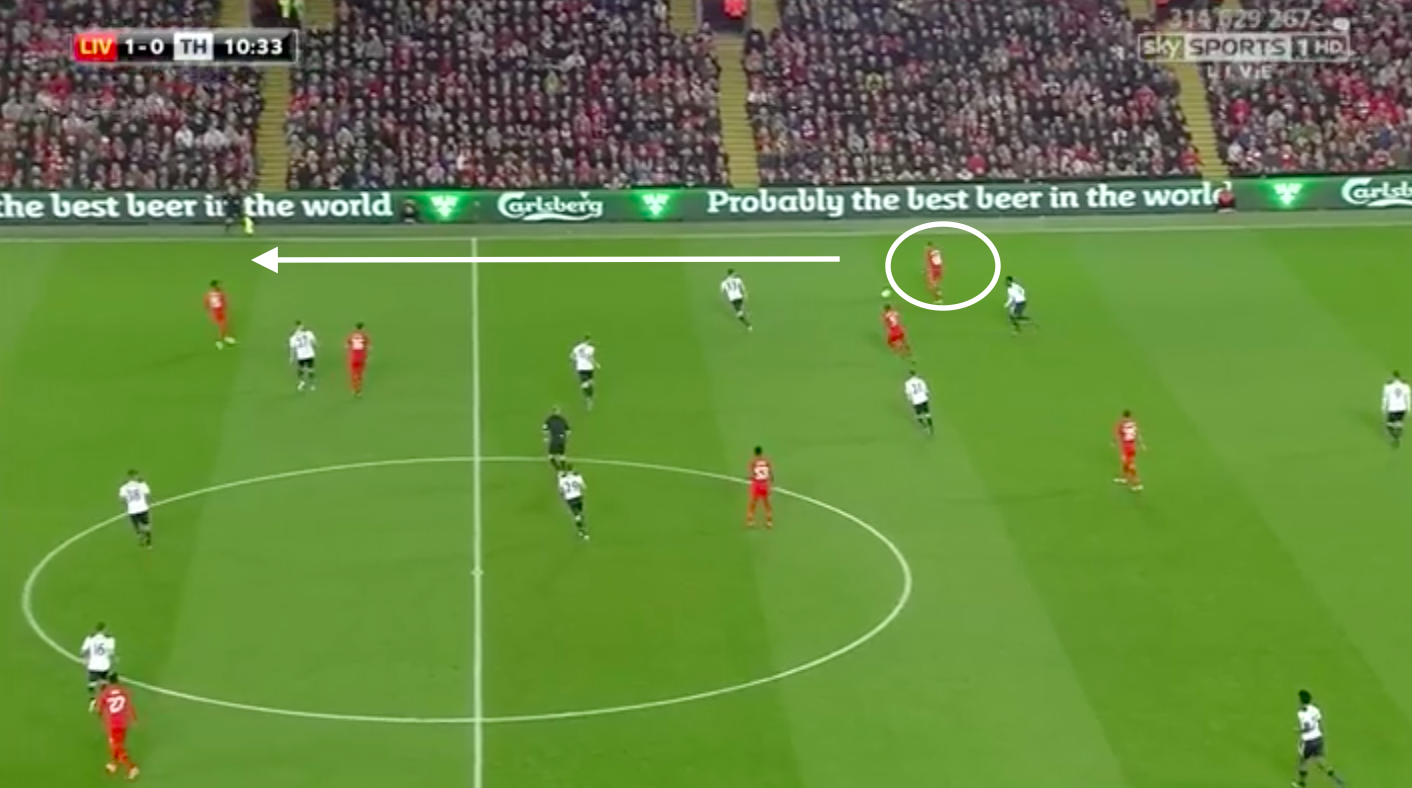 That’s not to say Alexander-Arnold doesn’t take the chance to execute a pass if there’s one on. In the picture above you can see there is space for him to drive into or alternatively he could hold onto the ball and slow the game down. However, he shows off his passing ability in this instance and plays a well weighted curved ball ahead of Daniel Sturridge for the striker to run onto which momentarily leaves Liverpool 3 vs 3. It leads to the Sturridge effort from the edge of the area which draws a good save out of Vorm. 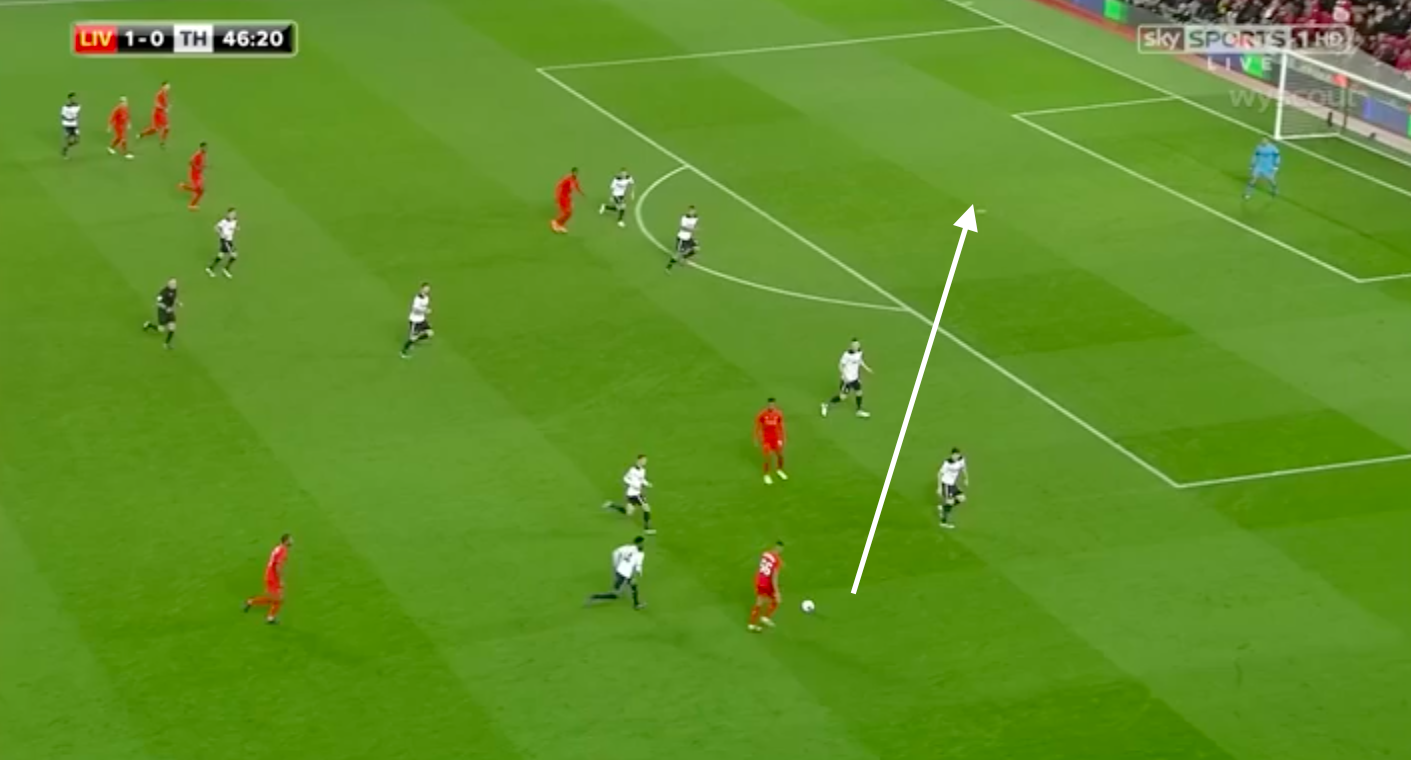 These two pictures are eerily similar. In both instances Alexander-Arnold has the ball on the right and he’s looking for the quick ball in behind the Spurs defence to capitalise on Origi’s positioning and clever movement. He’s not just lumping it into the box and hoping for the best, he picks his passes and Liverpool benefit from that. In the top picture Origi gets on the end of the pass, flicks it and wins a corner. In the second picture Alexander-Arnolds ball into the box is just a little overhit and Origi isn’t able to get on the end of it. But it gave the Spurs backline something else to think about, there was always the threat of the run in behind from the strikers and the ball over the top from Alexander-Arnold

It’s credit to him that Liverpool didn’t miss Clyne in the hour the no.2 didn’t play. Alexander-Arnold isn’t near Clyne’s level just yet but his inclusion didn’t hamper the functionality of the team. It was a standout debut from the youngster and it’s easy to see why so many at the club have high hopes for him. He’s a bit raw, maybe a little rash at times, but there’s potential there for Klopp to craft him into a solid deputy for Nathaniel Clyne and it would save Liverpool millions in the transfer market.