Going in to the international break Liverpool found themselves sitting proudly at the top of the English Premier League table. A 6-0 demolition of Watford had shown Liverpool at their best, full of incisive passing and vertical movement that rendered their opponent’s defensive structure in pieces.

International breaks are either a blessing or a curse depending on the form that you are in at the time. A run of poor results can be turned around after a period of extended self analysis and training whilst on the same note your opponents can analyse your style and method of play and be better prepared for you should you be in the midst of a good run. Not to mention you run the risk of losing key players during international matches.

After this period Jurgen Klopp and Liverpool seem to have suffered from both negative aspects of the international break with key midfielder Adam Lallana leaving the field injured during the match versus Spain and in turn missing out on the match against Southampton. Claude Puel and Southampton in turn seem to have spent the break analysing and preparing for the match against Liverpool and they produced a defensive performance that was able to stifle the much vaunted Liverpool attack.

The biggest question for Jurgen Klopp and Liverpool would be who would replace the injured Adam Lallana as the most advanced of the three central midfield players. Luckily Klopp has resources available to him in this area and after an excellent start to the season Georginio Wijnaldum got a chance to claim his starting place back. That did not however give any clue as to which of the midfield players would take Lallana’s specific role in the team.

For the rest of the Liverpool team the names were all familiar and comfortable. Karius in goal, a back four of Clyne, Matip, Lovren and Milner. Jordan Henderson and Emre Can partnering Wijnaldum in the centre of the field and the front three that have been earning rave reviews all season Sadio Mane, Roberto Firmino and Coutinho.

The settled nature of the squad may be a result of a less congested fixture list with no European football this season but the benefits that it brings in terms of team cohesion are huge.

Southampton on the other hand have seen their league form and team sheet struggle slightly as they compete in the Europa League.

The strength to this Southampton team this season is in their defensive unit with Fraser Forster in goal and Cedric Soares, Jose Fonte, Virgil van Dijk and Ryan Bertrand across the defensive line. In midfield Southampton have a similar setup to Liverpool with Hojberg and Davis ahead of Romeu.

Problems in the build up

Since the first two matches of the season in which there were discernible issues in the build up phase for Liverpool we have seen a much more fluid system from Klopp’s men. They utilise a variety of options with Jordan Henderson as the controlling midfielder and Joel Matip as the free defender alternating as the player to take the ball out and play it through in to the middle and final thirds of the pitch.

In the last few matches we have seen the return to the first team of the German international Emre Can in place of Wijnaldum. With that there has been a slight alteration to the build up phase, with Can comfortable in a variety of roles in the midfield, he has dropped in to the left hand side to form a double pivot on the same line as Jordan Henderson. This movement gives Liverpool an extra option to bring the ball out efficiently and effectively.

Against Southampton however there appeared to be something missing in this regard. It could be as simple as frustration building as Liverpool failed to find the breakthrough that caused the disconnect in their normal system but time and time again the player needed for the next connection higher up the field seemed to be missing. The spacing amongst the Liverpool players was surprisingly lacklustre. 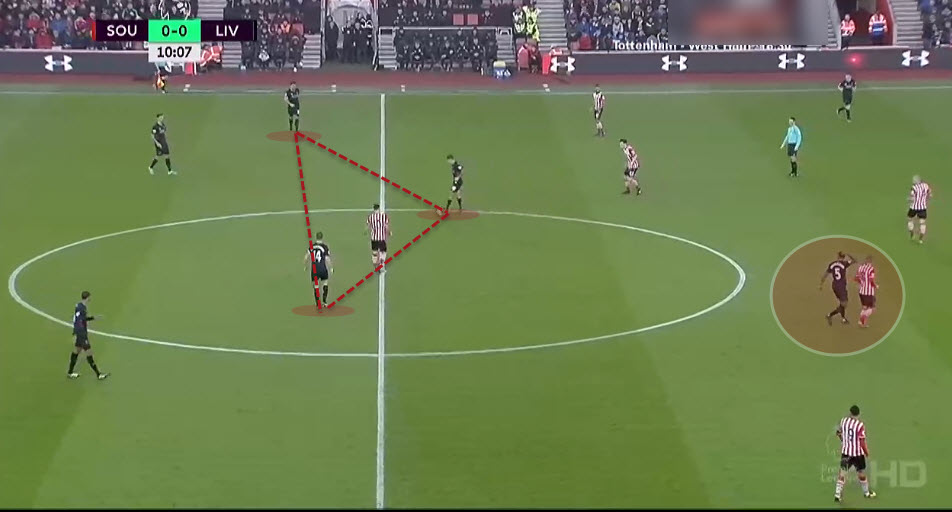 In this image I have highlighted three Liverpool players with Jordan Henderson, Emre Can and Coutinho all closely connected. Meanwhile Wijnaldum is in an advanced position right up against the opposition player.

There are two apparent issues. Firstly the three Liverpool players in the initial build up are too flat and passive. There is of course the danger from Coutinho that he could turn and drive the ball in to the space centrally but with his back to goal he is easily contained.

The second issue comes with the positioning and passive movement from Wijnaldum. With Lallana in this position there is constant movement in and out of space across the width of the field. All that the Dutchman has to do in this instance is drop back 5-10 yards in to the empty space to provide an advanced platform for Liverpool to start playing through the Southampton defensive structure. 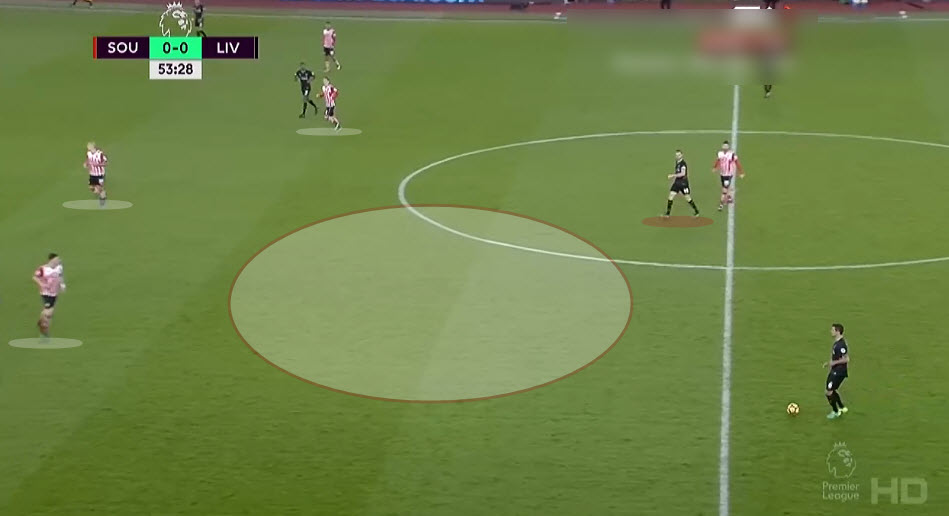 Again in this example there is a large area of unoccupied space ahead of the ball that can and should be utilised in the build up. In the last few weeks the way that Liverpool were playing any one of three things would have happened.

Dejan Lovren in possession has the time and space to step forward in to the space to prompt the passive Southampton midfield to engage with the ball and weaken their structure. Henderson would have moved forward to offer the next pass in a central advanced area or a forward player would have dropped in to offer the option.

Instead what we saw was Lovren attempt to force the pass through in to the defensive structure and give the ball away.

This time Joel Matip has the ball at the start of the build up action and again there is a large empty space in the centre of the field in an advanced position that Liverpool would normally look to play in to. This time the midfield three are all sitting narrow and flat with little in the way of movement of depth in order to provide a passing option for Matip. Once again the expectation would have been for Henderson to drop back to offer the easy option.

Instead the pass is forced long and the ball is lost.

There are of course times over the coming season when we are going to see Liverpool have an off game. This was not necessarily it, there was positive attacking movement in and out of the final third of the pitch and chances were created. They simply came up against a Southampton side that are exceptionally well drilled defensively and had obviously spent time working out how to specifically counter the threat posed by Liverpool.

Above is an example of the exceptionally well drilled defensive structure from Southampton. In this situation Liverpool tend to be at their most dangerous attacking an isolated back four. The positioning and spacing between the back four and the recovering runs of the midfield three are ensuring that there is minimal space for the Liverpool forwards to play and drift in to their preferred spaces between the lines.

This time the ball is in the wide area with James Milner. With Coutinho drifting in to the half space to connect with him we would normally see one of two things happen. Either the pass would come to Coutinho who would turn to drive centrally or Milner would drive to the line and cross the ball.

Coutinho however is covered by a midfielder and Romeu is positioned to cover the run down the line. Liverpool ran out of ideas and had to restart their attacking movement.

Another favourite movement from Liverpool is to have possession in this position and then to have the ball slipped diagonally in to the penalty area for a forward making a run across the defensive line.

As Cedric is stretched out wide to cover the wide area the midfielder drops in to cover the expanded spacing between the fullback and the centre back. This takes away one of the favoured avenues for Liverpool to attack.

It is a simple truth that you can’t win every game in a league campaign. Under the French coach Claude Puel Southampton have evolved in to an extremely well drilled defensive unit that will be difficult for teams to break down this season.

In seasons gone by this would have been the kind of match that Liverpool would have lost. Instead an efficient attacking performance failed to yield a goal but they remained resolute defensively.

The issues in midfield need to be resolved. Klopp needs to identify the correct replacement should Adam Lallana be missing and ensure that said replacement understands the tactical requirements of the role.