The match at Anfield against Sunderland took on extra significance given the run of form enjoyed by Chelsea under Antonio Conte. Whilst it is remiss to place too much importance on a single result at this stage of the season there is still a danger in allowing your opponent to open up too much of a gap at this point of the season.

Last week against Southampton saw Liverpool come away with a 0-0 draw with Southampton setting out in an organised and well structured defensive unit.

So far this season we have seen mixed results from Liverpool when playing against teams that are content to sit in a low block. In the second match of the season we saw Burnley come out 2-0 winners at Turf Moor despite barely seeing the ball. Hull City on the other hand tried to set up in a similar fashion but were handicapped by an early sending off as Liverpool overwhelmed the ten men and won 5-1.

It would be incorrect to suggest that Southampton set up in a purely defensive shape, instead they are extremely well drilled defensively and capable of countering the myriad of attacking threats offered by Liverpool.

Sunderland would provide a completely different proposition to Southampton. Under David Moyes the side from the North East have started extremely slowly in the league but in recent weeks there have been signs of a possible revival. Under Moyes the general philosophy of Sunderland is one of defensive football with direct counter attacks.

Would this distinct defensive style play in to the hands of Klopp’s attacking structure or would we see another difficult match for Liverpool?

There was little change in the team news for Liverpool with Adam Lallana still not fit to return to first team action. The defensive unit was unchanged with Karius in goal behind a settled unit of Clyne, Matip, Lovren and Milner. There may have been an argument for Lucas coming in to the back line instead of Lovren given his extra ability on the ball.

The midfield three consisted of Henderson, Wijnaldum and Can whilst in attack we saw the first choice unit of Coutinho, Firmino and Mane.

Sunderland defend in a deep block

In the aftermath of this match Liverpool manager Jurgen Klopp has came out and said “I’m not sure I’ve ever played against a more defensive team than today” that in itself tells the story of the match as Sunderland came out in the first half purely intent on denying Liverpool space to play in the final third.

At times the structure from Sunderland resembled a 6-3-1 system with even the ‘3’ in midfield deep and shielding their defensive line.

This defensive strategy limited the space that Liverpool had to play in their favoured attacking zones. Mane, Firmino and Coutinho all continued with their favoured movements dropping in and out of spaces in the half spaces and in Coutinho’s case centrally. Unlike in most matches though these movements were not enough to provoke discord in the Sunderland defensive block.

They were allowed to drop off unchecked and pick the ball up in space whilst the Sunderland defensive structure stayed stubbornly in space.

That Liverpool were able to eventually overcome this stubborn resistance is a testament to their tactical discipline as instead of resorting to brute force to break the defensive structure they continued to be patient and dominate the ball in the final third. With the forward players failing to break through in isolation it was left to the supporting players to combine and overload sections of the Sunderland defence.

The role of Emre Can

At the beginning of the season we saw Wijnaldum come in to the first team and settle extremely quickly in to the system preferred by Klopp. At this time Emre Can was injured and there were doubts over where he would find space in the first team when he was fully recovered.

Those doubts were assuaged when Wijnaldum missed time due to injury and this coincided with Can regaining something approaching full fitness. At first the role played by Can was unclear as he appeared to be performing multiple tactical duties within any given match, gradually though we have seen a return to his performances of last season with impressive tactical intelligence combined with forays in to the final third of the pitch.

In this image the importance of Coutinho’s movements from outside to in are again highlighted. I have shown more than once this season that whilst Mane on the right side prefers to come inside in to the narrow half spaces to connect with Clyne we see a different structure on the left hand side with Coutinho coming in to the central area from the left side.

As Coutinho moves in to the central area he drags Sunderland players along with him and opens it up. As the space opens up Can has the capacity and the willingness to move forwards in to the final third whilst carrying the ball.

These movements from deep add extra stress on to the defensive structure and when combined with the movements of the front three we can begin to see how Liverpool gradually broke Sunderland down. 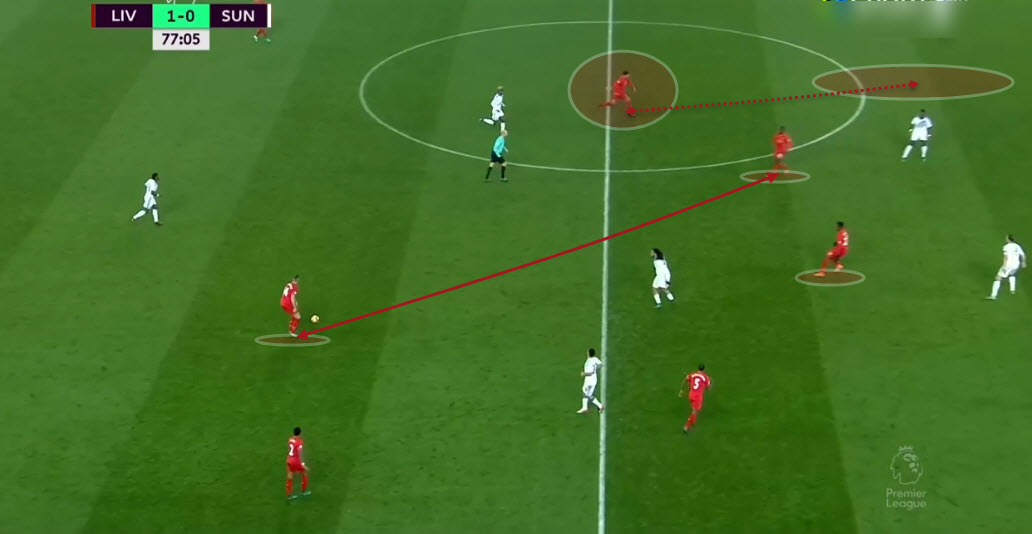 This time the ball is still in the Liverpool half of the field when Can moves towards the final third of the field.

The ability to move in to advanced areas and receive possession either facing goal or with his back to goal makes it very difficult for the opposition to account for the movement of Can.

As the game wore on Liverpool tried more and more to overload specific sides of the Sunderland defence. Their players appear at times to be in constant movement with advanced players dropping deep and deep players moving forward and we saw connections formed at times between four, five or even six Liverpool players in one side.

Here I have captured six Liverpool players trying to overload on the right hand side of the final third. By positioning themselves in this manner Liverpool make it easy to shift the angle of the attack to either side to the front or to the back of the structure.

This ease of ball circulation means that they can quickly adjust and react to mistakes or gaps in the Sunderland defensive system to capitalise on them.

This time the structure from Liverpool is slightly different. As Firmino and Origi have dropped in to deep area that would normally be occupied by a number ‘10’ we see Can and Wijnaldum bypass them to become the most advanced players in the attacking movement.

As the play develops the forward players will be able to move back towards the Sunderland goal and threaten the defensive structure with an overload.

Against a stubborn defensive resistance the patience and tactical discipline to continue to probe and look at different angles and pressure points to break through the defence.

2-0 was of course the very least that Liverpool deserved in this match. They dominated the game in each phase of the match and in truth the fans were becoming nervous as the game progressed and there was still no breakthrough.

If Liverpool had failed to break Sunderland down and drawn their second consecutive match 0-0 then questions would have to be asked about their title credentials.

This is a match that Liverpool needed to win, they lost Coutinho to injury and had Sadio Mane in poor form and still found a way through, some would say that this is the mark of champions?